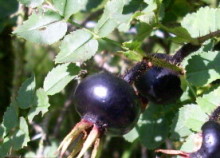 What Are Rose Hips?

There are hundreds of species and varieties of rose - wild and cultivated - the good news is that they all produce usable fruits. The plants I found were an ornamental variety that produces dark purple-black hips. 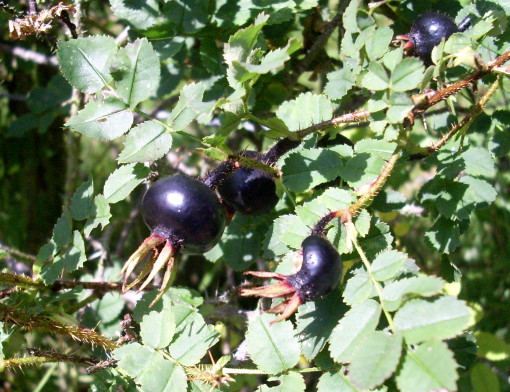 More common sights (as depicted below) are the big, tomato-like hips of Rosa rugosa and those of wild hedgerow roses such as eglantine or dog rose (unripe in this photo) 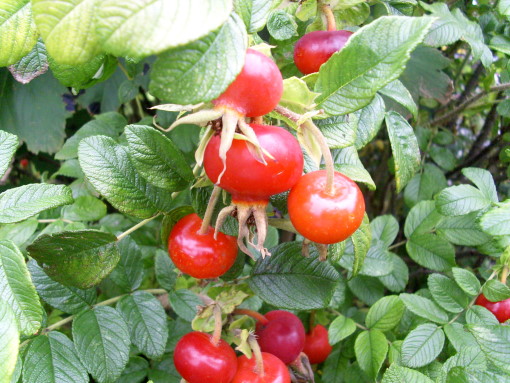 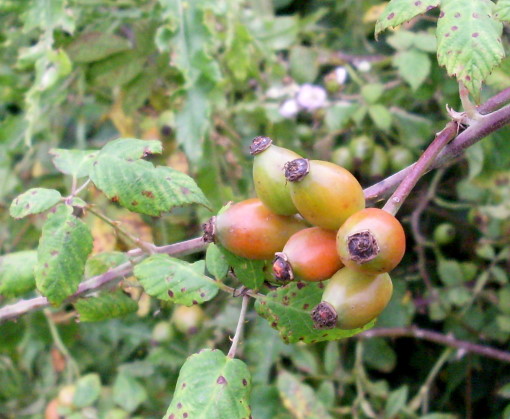 There's no point picking rose hips until they're really ripe - they will have hardly any flavour until then - in the case of most wild species, the fruits ripen in late summer to autumn, but some of the garden varieties ripen a lot earlier. If the rose hips can be crushed between finger and thumb, they're ready - in some cases, this will only be true after there has been some frost to soften them.

Most roses have very sharp, backward-pointing thorns that will happily snag clothes and pierce and lacerate human flesh - another minor risk is the little hairs inside the rose hips - these can quite easily work their way into the skin, becoming a painful irritant. If preparing the hips for jam, it's best to wear rubber gloves - if straining them for jelly or syrup, don't squeeze the jelly bag, or the little hairs may be forced through the mesh. 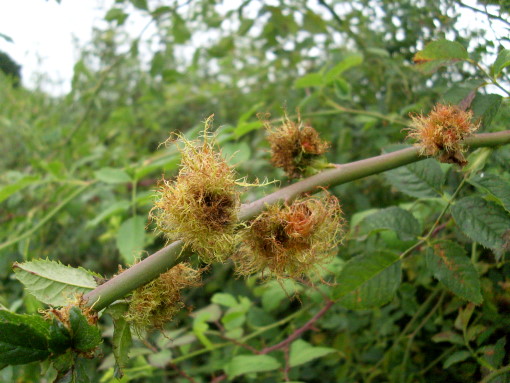 Quite a common sight on wild rose bushes - these spongy, hairy growths are galls - they're caused when a certain parasitic insect lays its eggs on the stems - they secrete a chemical that provokes the plant to form these abnormal structures which the developing larva then inhabits and feeds upon.

they're not, as far as I know, useful for anything - I just thought they were interesting enough to warrant a mention.

Rose Hips In The Kitchen

Rose hips are packed with vitamins - during WWII, when imported fruit was scarce, the government organised volunteer picking of rose hips by the ton and these were processed into syrups and health tonics.

So rose hip syrup is probably the most familiar culinary use for this often-neglected wild resource.

I picked a good couple of pounds of black rose hips

For any preparation that would contain pieces of the actual fruit, it would be necessary to trim and de-seed the rose hips - being careful also to remove the irritating little hairs in which the seeds are packed. But because I was making syrup, it was only necessary to wash them. 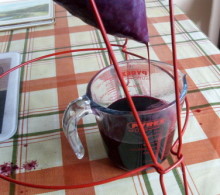 After washing, I put them in a large pan, added just enough water to cover, then brought it to the boil and simmered until the rose hips became soft and mushy. Then I tipped it into a jelly bag and left it to drip. 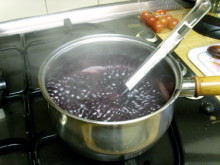 The resulting juice was an incredibly dark, staining purple colour. I put it in a clean pan and added 300g of sugar to my 400ml of juice and boiled it for about ten minutes 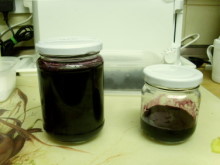 I ended up with a little over a jar full of syrup. 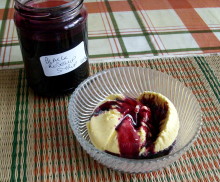 Syrup made from the black rose hips has a sweeter, more rounded fruity flavour than my memory of the stuff I've made from wild red hips in the past - which is usually more acidic and aromatic.

It's great poured over ice cream or pancakes.

My mother had several roses bushes in the backyard, one of which produced hips that were bright orange bordering on (but not quite) red when ripeMy sisters and I would pull them off and eat them raw. It's a bit tedious, as you have to eat around the ce

Hi thanks , i am going to make it , real things in nature created by ALLAH ( GOD ) ;