« Opening Up A Can Of Worms - Fruity Oaty Bar (Not Mandatory) » 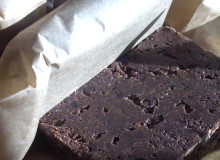 This is an experimental attempt to make a compact, durable, tasty, high-energy foodstuff suitable for carrying and eating while walking, exploring and hiking.

That's not a new idea of course - Kendal Mint Cake is an example of just such a food, and compact food rations have been made for military use at various times.

This experiment grew out of idle curiosity about trying to recreate the military D Ration chocolate bars developed in the 1930s - these were made of a mixture of oat flour and chocolate (or at least an assortment of ingredients roughly equivalent to those in modern chocolate.

I still intend to pursue the idea of making the D Ration bars (to resolve a question in my head that I will discuss when I get to it), but I need to find a source of oat flour - my food processor won't mill it finely enough.

I wanted to make something that meets as many of the following criteria as possible: 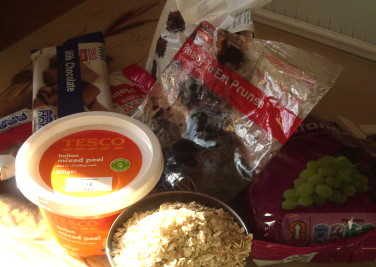 I started with a collection of ingredients pulled from the cupboard

- A couple of bars of cheap chocolate, some prunes, sultanas, dried dates and candied mixed citrus peel and a generous cup of rolled oats. 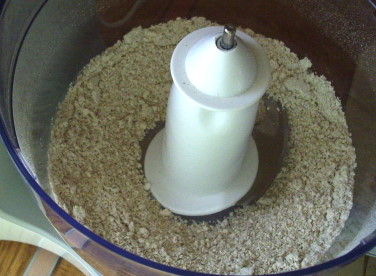 I don't want these to be flapjacks, so I ground the oats to fine meal in the food processor.

Fine oatmeal (i.e. bought already processed to a fine texture) could have been used instead, or oat flour. 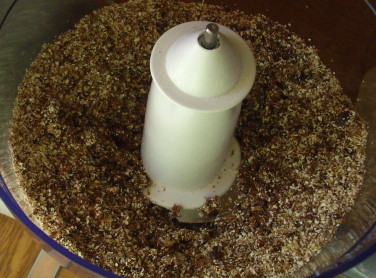 I also processed the dried fruit (about 250g, mixed, in total) along with the oats until finely chopped.

The purpose of this is to try to get a fairly homogeneous end result that isn't made fragile by large clusters of fruit pieces. 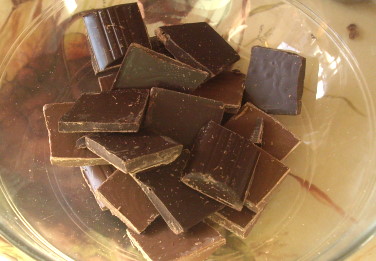 The chocolate is just a couple of bars of cheap supermarket-own brand chocolate - about 30% cocoa solids - nothing special, but not desperately poor quality either - one bar each of milk and dark.

I broke it into pieces and melted it - this could have been done in a heat-proof bowl over a pan of boiling water, but it's easier to do in the microwave - carefully checking every 30 seconds so as not to burn it. 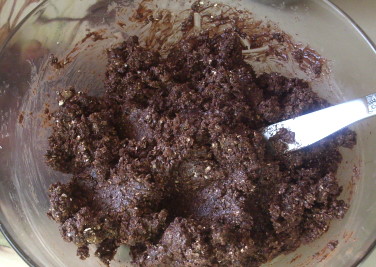 Once the chocolate is melted, it's necessary to work quite fast.

I added the oats and fruit mixture to the melted chocolate and stirred it together with a table knife - eventually, it formed a kind of stiff dough. 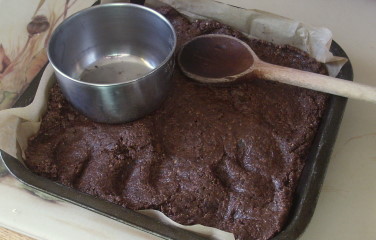 I put the mixture in a shallow pan, lined with baking parchment, then spread it out and pressed down with the flat bottom of my measuring cup.

Then I covered it and left in a cool place for an hour or two. 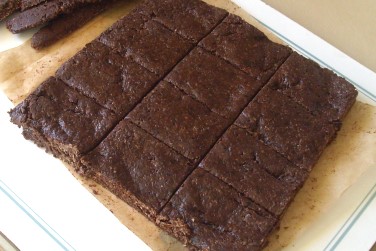 Later, I removed it from the pan, trimmed off the edges and cut it into neat pieces.

These I wrapped in new parchment paper to make them easy to open with gloved hands - a plastic bag would probably do just as well, if not better in some ways.

Pretty good - the result was a solid, slightly chewy bar that is easy to handle and seems like it should be durable. The flavour and texture was pretty good too - satisfying to munch and the combination of fruit and chocolate was just about right. 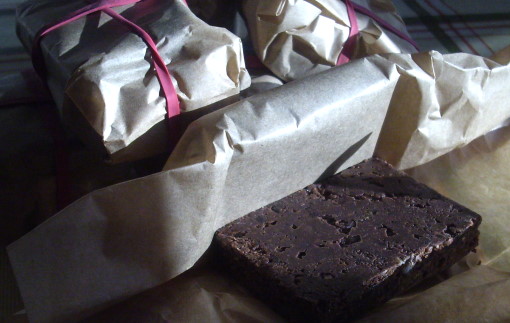 There's probably still room for improvement here - although it's undoubtedly crammed with energy in the form of carbohydrates and fats, it could perhaps benefit from a little more protein - maybe some ground almonds or something... further experiments to follow...

I used this and your fruity oaty bars as inspiration, and just adapted it to what they sell in my local store. I don't like left-over ingredients, so I pour the entire package in :What I use is one 250g bag of mixed dried fruits, one 200g bar of dark c