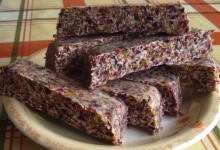 This idea grew out of previous experiments to make energy bars - but I wanted to try making them with white chocolate so as to show off the fruit.

Also, I've long wanted to make something I could label 'Fruity Oaty Bar'. (Scroll down to to foot of this article if you're still scratching your head) 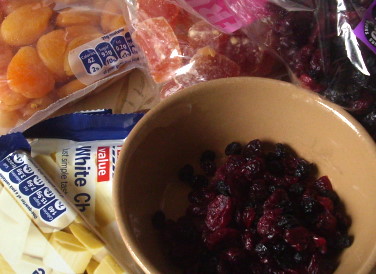 For my fruity oaty bars, I used about 325g of dried fruit (a mixture of apricots, cranberries, blueberries and papaya, but any dried fruit will work), 125g of rolled oats and 200g of white chocolate. 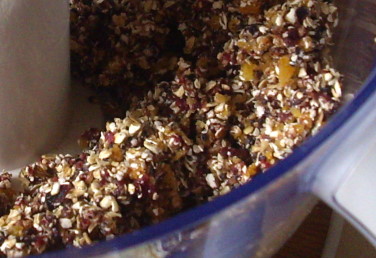 I whizzed the fruit and oats together in the food processor until it was all finely chopped. 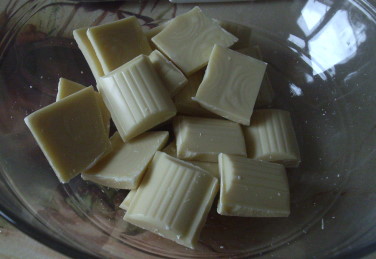 I broke the chocolate into pieces in a large glass bowl and melted it by putting it in the microwave for about two minutes.

It's easy to overheat and burn the chocolate that way, so it's necessary to keep an eye on it - alternatively, the bowl could be suspended over a pan of boiling water and the chocolate will melt more slowly with less risk of spoiling it. 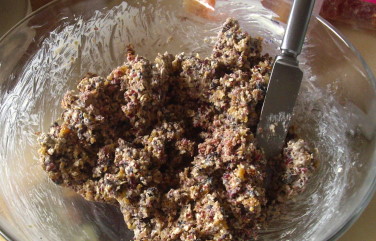 Working quickly, I tipped the fruit/oat mixture into the chocolate and stirred it together until it formed a doughy paste.

This is the reason I used a large bowl to melt the chocolate - adding the fruit/oats to it soaks it all up without leaving much waste stuck to the bowl or implements. 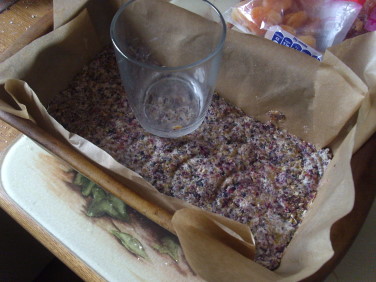 I spooned the hot mixture into a loaf tin lined with baking parchment, then pressed it down firmly with the base of a tumbler.

Then I left this in the fridge to cool completely for a couple of hours - after which time, it was easy to turn out and slice into bars - Fruity Oaty Bars!

They do look a tiny bit like those fat snacks that are sold for feeding to garden birds - I would really have liked to separate out the fruits and assemble the bar in stripes of different colours, but that's logistically tricky, especially when dealing with melted chocolate.

Anyway, they're delicious - very fruity, but quite rich and sweet - they can be cut into quite small pieces and are great to enjoy alongside a cup of espresso. 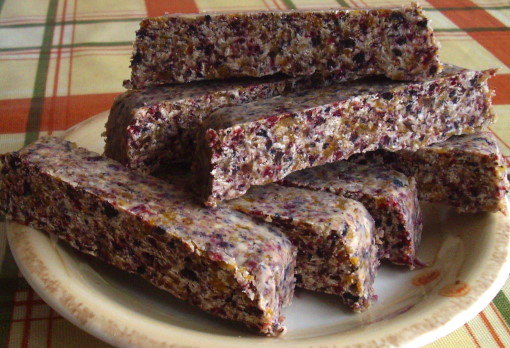 You'll either know why the term 'Fruity Oaty Bar' is funny, or you won't.

It comes from a fictional product advertisement in the film Serenity, which in turn is based on the excellent but ill-fated US TV Series Firefly.

You can see the full ad here on YouTube, although it won't make much sense out of context (it is quite purposely weird, I can tell you).

So if you're still scratching your head after this explanation, I heartily recommend watching the film (well, I recommend it in either case).

Great recipe! I love your site. A man after my own heart so they say. My carer thinks I'm nuts and he thinks my girls are too when they each come to visit because we are always doing imaginative things with our time. Making plans is one thing but putt

Makes a man out of a mouse! Looks great, gotta try it

I've been making my version of this for ages, based very loosely on the recipe given here. I've just found a new variation; our local 99p shop now sells bags of 'sintered toffee' - that's the honeycomb stuff that's in the middle of crunchy bars. If y