We went to a Tomato Festival at West Dean. Arriving early, we were one of the first few cars in the parking field and we found some fantastic horse mushrooms.

What Are Horse Mushrooms?

Agaricus arvensis - related to, and resembling the common white mushrooms sold in every shop, but these are a bit different - they're more robust in stature and size - growing to the size of a dinner plate in some cases (as indeed in this specimen). 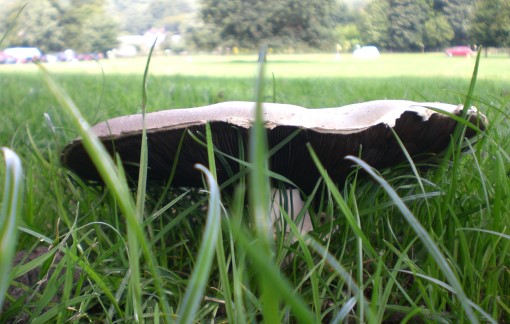 They also have a more intensely mushroomy flavour than the typical commercial mushroom - especialy when mature, when the gills turn deep chocolate brown and the whole mushroom develops a flavour that is almost meaty in its depth and complexity. 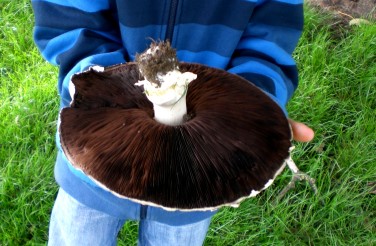 This one was fully 9 inches in diameter.

After picking I trimmed off the bottom of the stalk, which was covered with sandy soil - with a big mushroom like this one, the only way to transport it is flat, upside down.

(If you put it flat, right-side-up, it will drop dark brown spores on everything). 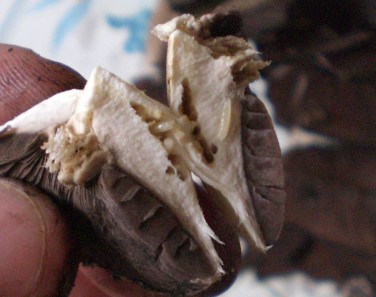 I picked a good number of smaller specimens too.

Sadly, but not unusually, about half of the mushrooms I picked were inhabited by maggots and had to be thrown away.

(I suppose I could have just looked a little less closely and chosen not to care, but I didn't fancy that). 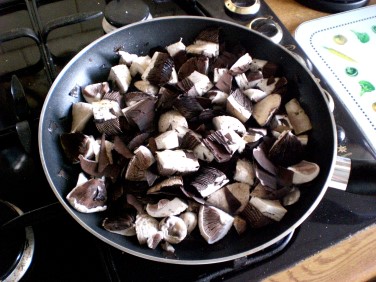 Still, there was a good pan-full of mushrooms.

I fried them gently in a little vegetable oil, then when they were about halfway done, I added a good lump of butter to finish them off.

I served them on slices of toast - horse mushrooms are uniquely suited to this presentation, as during cooking, they release a rich, dark, gravy-like juice which is too good to waste - and a slice of toast mops it up perfectly. 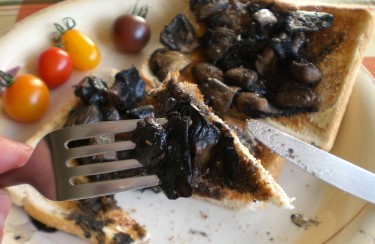 Oh my! They were very, very good indeed.

Mushrooms should be picked into a basket or other open container - putting them into a plastic bag should only be done if no other options are available - and they should not be left in there for long, as they will 'sweat' and quickly become unusable.

I always think it's a good idea to trim off any dirt-encrusted parts of gilled mushrooms in the field, especially if they are to be laid in the basket upside down - cutting off the dirty base of the stalk is a lot easier than picking out grains of sand later from between the gills.

Horse mushrooms are closely related to the familiar white mushrooms sold in shops, and also to other well-known edible species such as field mushrooms and wood mushrooms.

However, every family has its bothersome relative and this is no exception. The Yellow Stainer mushroom - Agaricus xanthodermus is similar in appearance to the field mushroom, but is not safe to eat - causing severe stomach cramps and sweating in some people.

It is easily distinguished from the field mushroom or horse mushroom by two obvious criteria (as well as a number of more subtle ones):

The flesh turns bright yellow within seconds or minutes of being cut or bruised and the whole thing has an unpleasant chemical smell described as 'inky'.