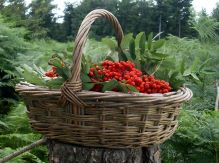 A trip out to the New Forest in hope of finding wild mushrooms or bilberries - we found neither, but found instead some nice, ripe, plump Rowan berries 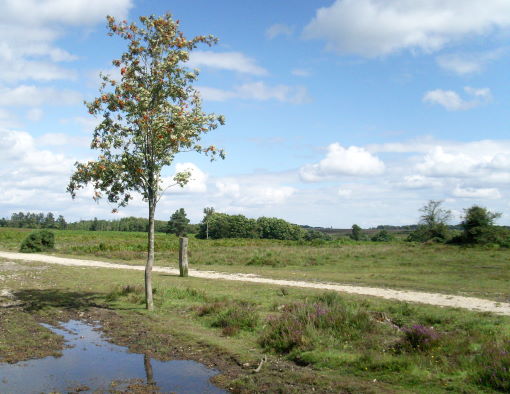 Sorbus aucuparia - also known as Mountain Ash (because the leaves are superficially similar to the unrelated Ash tree - Fraxinus. This is a smallish deciduous tree bearing clusters of creamy-white flowers in early spring, followed by berries which may be anything from bright orange to deep blood red in colour and which may vary in size from a couple of millimetres in diameter to about a centimetre. 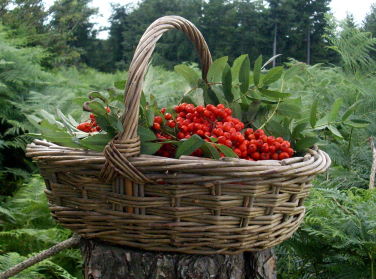 Because they appear in large clusters, the berries are easy to pick - for this reason, it's possible to be choosy and only collect those that are nice and plump and appear juicy and ripe.

Rowan berries are perhaps the most common and familiar of all wild berries, yet they are very seldom used as food - indeed I think they are generally (falsely) considered very poisonous - certainly this was my impression when growing up, and it took a fair bit of effort to dispel the notion in my own children.

They can be unsafe to eat in the raw state, due to the presence of a fruit acid that breaks down completely and becomes benign during cooking - so maybe that's just the reason for it (although it's pretty unlikely anyone would eat them raw anyway, as they are incredibly sour)

I was lucky enough to find some splendid crab apples on the way back from picking my Rowan berries, so I decided to make Rowan and apple jelly. 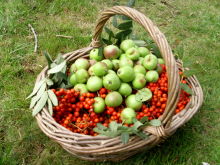 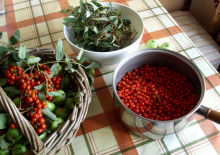 I topped this up with chopped crab apples and added just enough water to cover, then brought it to the boil and simmered for about ten minutes until the fruit was pulpy and soft. 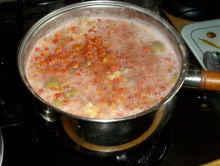 I made sure all the berries were burst by mashing the cooked fruit with a potato masher, then I put it in a jelly bag and left it to drip.

The juice came out a beautiful clear rose-red colour. I added 400g of sugar to each 500ml of juice and boiled it in a clean saucepan until the sugar thermometer read 104 degrees centigrade - by which time the jelly had reduced in volume quite considerably. I skimmed off the froth and poured it into sterilised jars - it filled three large ones. 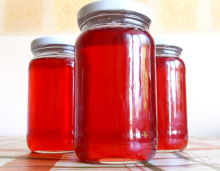 The resulting jelly is clear, deep ruby red in colour. I did taste a bit of the jelly that was left in the pan - it's quite sharp and fruity, but also has quite a bitter, astringent kick to it - I don't know if this will mellow after a short time of storage, or if it's going to stay like that - in which case, the jelly is probably best suited for use in glazing roast meats or serving with rich game or something. 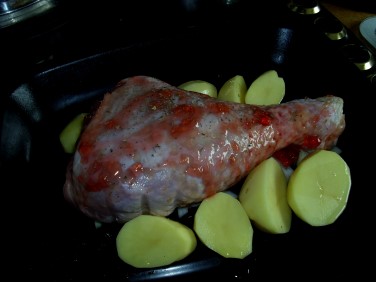 A week or two after making my Rowan Berry Jelly, I decided to try it out as a glaze on a large turkey drumstick (my favourite part of the turkey - 100% dark meat - and really cheap when bought separately). 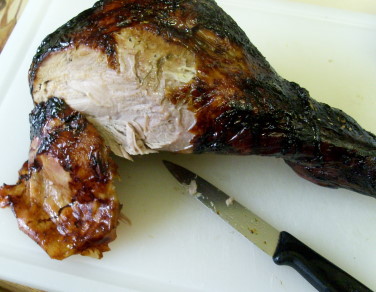 The result was a delicious sticky, sweet, fruity glaze - often the skin on a turkey drumstick is too tough and dry to eat, but not in this case - the glaze made it into something a bit special.

Some of the jelly also dripped down into the pan, caramelising with the onions and this added its own special twist to the gravy I made from the pan drippings.

The flavour of the jelly isn't strikingly distinctive when used this way, but it's pretty good nonetheless.

In a time of shortage I tried making Rowan jelly too, with a similar result. There's only so much meat glazing one can do! The berries however are better in jam etc if mixed with something much sweeter - they add their colour and 'bite' but the whole i