Conkers are the fruits of the Horse Chestnut tree - Aesculus hippocastanum. 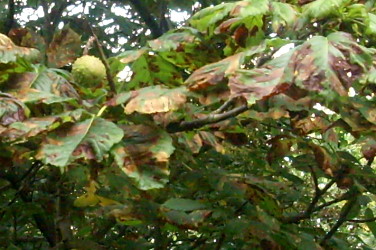 They're conspicuously visible on the tree as they develop - light green spherical fruits up to 10cm in diameter and armed with stubby, but sharp spikes.

The tree is large and stately and along with other related species, is often planted in parks and public places - sadly, in the UK, they are often attacked by pests - which is why the leaves in this photo look so shabby. 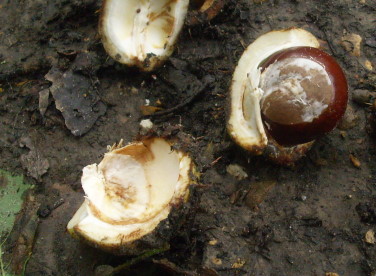 When they're ripe, they fall off and usually break open to reveal the attractive glossy brown fruit inside - the horse chestnut, or conker.

Let's take a really close look at them - they truly are quite beautiful objects in their own right - they have a deep, glossy sheen and are patterned with veneer-like swirls. Sadly, this lustre only lasts a day or two - and they dry to a duller red-brown colour. 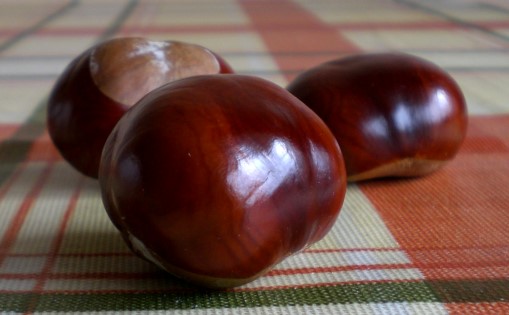 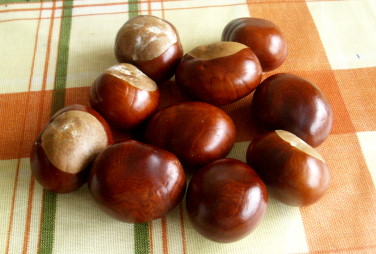 We gathered a few dozen conkers (the best specimens only pictured here) from a tree in the woods near home.

These are a few of the best-looking specimens. Interestingly, the roundest, smoothest conkers aren't always the best (i.e. most durable) ones for the game of conkers.

The Game Of Conkers

The game is played by threading the conkers on string (usually a shoelace). The players take turns to swing their conker to try to strike the other and break it. More details in a moment... 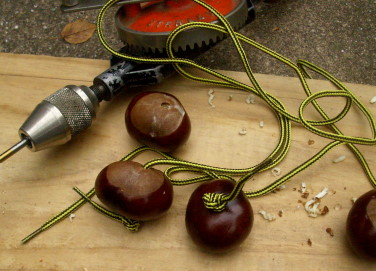 The conkers need holes made in them - this can be done with a nail or awl, but that tends to cause splitting, which will result in an early loss in the game.

The best method is to carefully drill a hole through the conker - choosing a drill bit about the same diameter as the string or shoelace upon which it will be threaded. 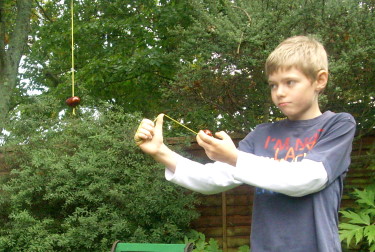 So, we're ready to play. One player dangles the conker on the string and holds it still while the other swings the attacking conker in an overhand arc, to strike it and hopefully smash it.

In some versions of the game, simple alternate turns are taken, but (at least around here), it's more usual for each player's turn to last until he or she first swings and misses the other player's conker. 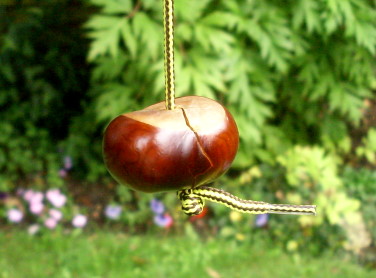 Eventually, one conker - most often the one being struck - will start to show damage and will eventually be broken so as to fall off the string.

At this point, the winning conker acquires a score and is called a one-er (meaning it has broken one other conker) - if it survives to win another round, it will be a two-er, and so on.

In some versions of the rules, a conker acquires the score of the one it beats, so a one-er beating a two-er becomes a three-er (or a four-er if we also count the immediate victory).

If the strings become entangled during play, the first player to yell "strings!" may gain a free single turn (or more), or may take over as the attacking player.

If either player should let go of the string and allow their conker to fall or fly off, the other player may shout "stamps!" and attempt to crush the conker underfoot.

We played a dozen rounds or so - my son winning all but two of them.

Memories of my childhood in Autumn, now some schools think they should ban children playing conkers on health and safety grounds!!! what a pity.

Here in the U.S., these are called buckeyes from a Buckeye tree, of course. This is especially true in Ohio, where our State College sports teams are aptly named, 'Ohio State Buckeyes'My father believed that by keeping one in his pocket, it kept rheu

I grew up near Vancouver, BC in the 60s and we had a huge chestnut tree in our schoolyard. We used to attach one at each end of about 2 feet of string and toss them at each otherGrab the string in the middle, spin it around your head and toss it. You

I love conkers! And I'd love to keep them fat and shiny for a long time, but they dry up so fast! Also I'd love to know more uses for them, I refuse to believe something so beautiful can't be 'exploited more'. If anyone can figure it, it's you! A missi

I know what you mean, Maria - I've often held a conker in my hand and marvelled at its polished beauty, but you know, it might just be that the ephemeral nature of conkers is part of the reason they are so specialIt's an experience we know we can look