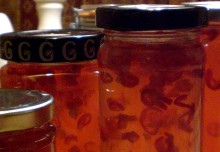 This red chilli jelly is sweet and fruity, with a well-rounded chilli flavour and heat - it's great with cheese and cold meats, for glazing hams and roasts, or, if you fancy something unusual, as a topping for ice cream. 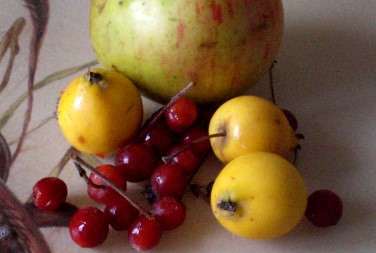 Apples are used as a the base for this jelly - I used a mixture of different crab apples - ornamental ones, picked from parks and gardens (with permission, where appropriate).

I supplemented these with a couple of big Bramley cooking apples too. 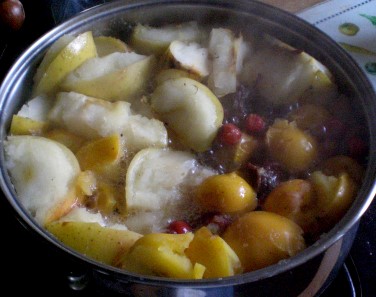 I chopped the apples roughly and put them in my largest pan - adding enough water to just cover the pieces.

I brought this to the boil, then simmered for about twenty minutes until the fruit was completely broken down (assisted by crushing the smaller, whole fruits with a potato masher). 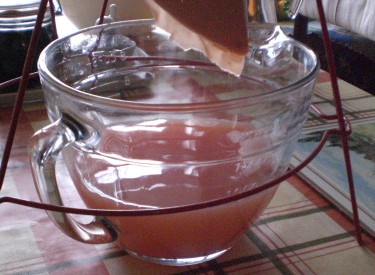 I transferred the cooked pulp into my jelly strainer and left it to drip and cool.

On its own, it produced about 750ml of syrupy cloudy pink juice.

When making jelly, you're not supposed to squeeze the bag, but I did - because the juice was already cloudy and because by doing so, I doubled the extraction - ending up with 1.5 litres of juice. 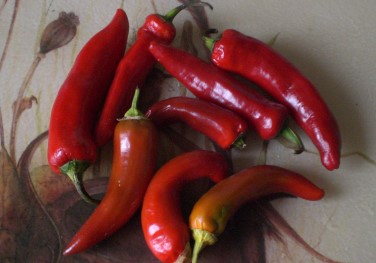 I stirred this over the heat until the sugar had dissolved, then left it to boil for a while.

Meanwhile, I thinly sliced a handful of medium-hot red chillies (from Project Samwise). 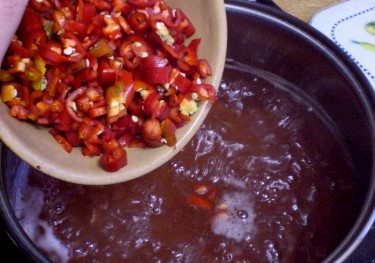 As the syrup boiled, the cloudy stuff rose to the top and formed foamy lumps that could be skimmed off.

As soon as that was all gone, I added the chopped chillies, then continued boiling until setting point (see below).

Meanwhile, I put some clean and empty glass jars on a tray in the oven at 150C to sterlilise them. The metal lids had rubber seals, so I sterlised these in boiling water. 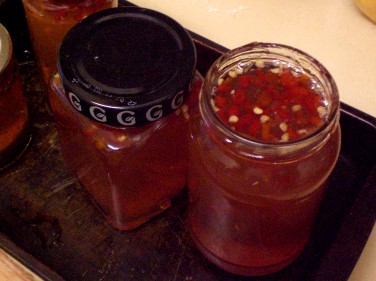 Then I ladled the hot jelly mixture into the sterilised jars, screwing down the tops while the contents were still very hot - this should mean that they are aseptic inside, and should not spoil as long as they're left unopened.

Unfortunately, all the chilli bits kept floating up to the top of the jelly (maybe it was more dense than it should have been - perhaps I used too much sugar, or overboiled it a little).

I had to wait until it was half set, then shake the jars to evenly distribute the contents.

The result was four nice jars of red chilli jelly, plus a little bit left over that I poured into a tumbler and stored in the fridge (to taste straight away - so I don't need to open a jar just yet... 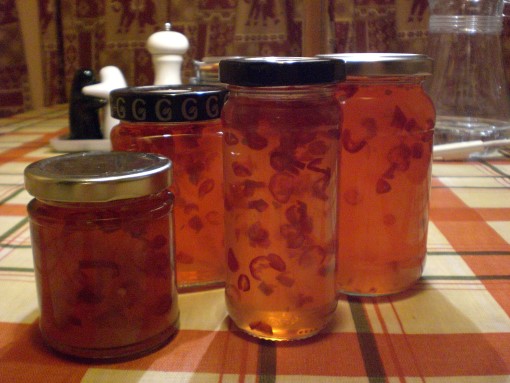 My jelly isn't crystal clear - this is partly because I squeezed the jelly bag, but mostly because I had to shake it while it was setting - before this, it was quite transparent - the flavour isn't affected by the slight cloudiness, so I'm not worried at all.

Judging the correct point at which a jelly will set can be tricky - and if it really can be perfected as a general skill, this is something I've yet to attain.

In theory, it can be done with a sugar thermometer, but in practice, the amount of pectin in the fruit will make some jellies set really firm at the same point that others would just be jars of syrup.

Perhaps the best way is to put a stack of small plates in the fridge when you start working, then when performing the final boil, take out a chilled plate and drip some of the mixture onto it, leave for a while, then push your finger through it to judge whether it is still merely syrupy, or if it's forming a skin and a gelatinous texture.

Once it reaches that point, stop boiling and get it in the jars straight away - because every moment from that point on, it's continuing toward a really hard set. The jelly will still be edible if it sets a little too hard, but will be reluctant to spread easily and may have a coarse mouthfeel.

I was the 'Lucky recipient' of one of the jars and it is FANTASTIC. Am planning to have a go at making it myself.

This looks delicious, I'm going to make it. Did you use the left over apple pulp for anything? I was thinking maybe it could be used in a cake or something...

I I don't normally use the leftover pulp, as it contains the remnants of pips and skin, as well as some of the fibrous pulp from the fruitIf you keep chickens or pigs, it could be fed to them.;