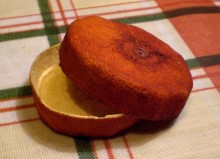 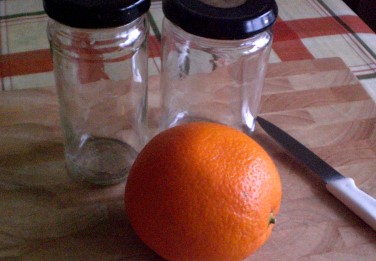 I started with a bag of fresh navel oranges.

The idea will be to stretch the empty skins over two differently-sized forms (in this case, two empty jam jars) - so as to form a base and a lid that fits over it. 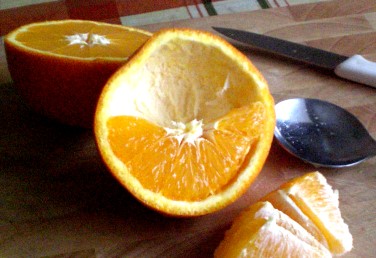 I cut the oranges in half and carefully scooped out the flesh with a spoon, taking care not to split the skin.

I found that only the stalk end of the oranges were usable, as the 'navel' end develops a hole after the fruit pulp is removed. 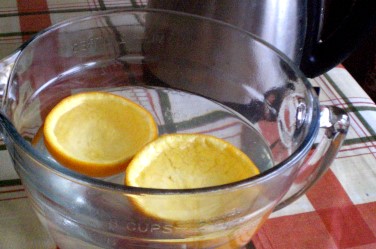 Steeping the empty skins in boiling water for five minutes made them very soft and pliable.

After this, they were very fragile, so I got everything else ready before trying to handle them. 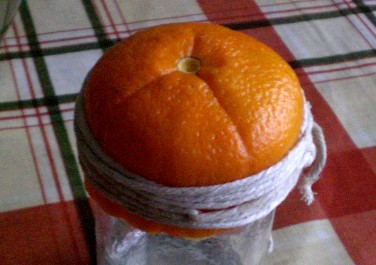 It was quite easy to mould the softened skin to the shape of the jar's base - the sides didn't even seem to need to gather or pucker at all.

I secured the peel in place with several turns of cotton string. Rubber bands would probably have done the job just as well. 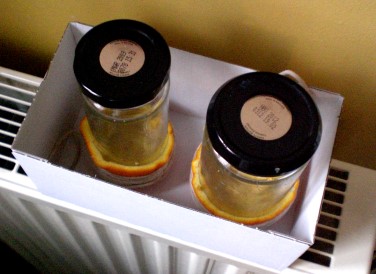 I did the same with the other jar, then I set them peel side down (to keep the base flat) in a cardboard box and set it in a warm place - on top of the central heating radiator - to dry out.

A couple of days later, the skins had shrunk a little, but were not drying as fast as I would have liked - mostly because of the impermeability of both the glass jar and the waxy outside of the orange peel. 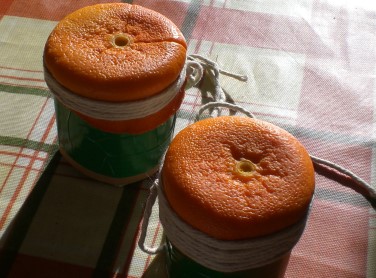 I was concerned that if they dried too slowly, they might rot. Also, there seemed to be a risk of the sticky inner pith adhering too tightly to the glass.

So I removed the skins from the glass jars and re-tied them over cylinders of tightly-rolled corrugated cardboard. 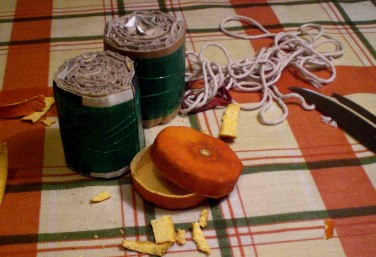 Mounted on the cardboard, they dried much quicker and after another two days, had turned into a hard, leathery and quite thin material.

I removed them from the cardboard forms and trimmed them up a little. They had shrunk a fair deal, which had caused a little splitting, and had pulled up the edges of the peel so that there wasn't a great deal of height to play with any more. 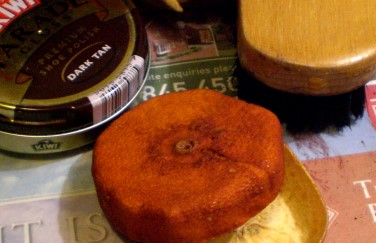 A light coating of brown boot polish didn't add as much shine as I hoped, but is probably worthwhile in adding durability to the material.

Although technically a success, the resulting box is a bit disappointing - too shallow, slightly cracked and split in places, and doesn't feel like it will last.

But this is just a first attempt - there is potential for improvement, I'm sure... 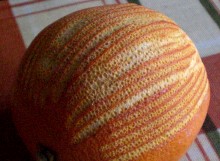 This idea developed from the observation that citrus fruits, such as the orange below, develop a hard, tough skin texture when it is allowed to dry out - in this case, because the outer waxy zest layer has been pared away to add to a recipe, then the orange was set aside and forgotten for a couple of days.

I'll be trying this again, but probably with grapefruit skins - because they're larger to start with, and thicker - so hopefully the end result can be a more usable, durable box.

I may also try cutting the fruit lengthways so that the top and bottom of the box can be plain - the stem/blossom scars will be part that I trim off the edges.

Not to be rude, but you seem to have an abundance of spare time...

I've seen orange peel boxes sold. I think some of them even had designs carved in by removing some of the peel. A quick google pics search shows some. (which I realize is against your philosophy of fiddling through yourself. =^.^= ) A couple of them we

We ALL have spare time*, some people just do a lot more with it than others* With very few exceptions--and if you are reading this blog, I don't consider you an exception;

I've made clove oranges for xmas a few times and they go as hard as cannon balls. It does take months thoughhttp://jonpenryn.blogspot.com/;

You could use the hole from the blossom end for installing a knob and make it the top of the box. A little linseed oil followed by some paste wax would give it a nice shine too.

the examples I saw have TWO things that might make this project work betterFirst is, they are almost ALL INSIDEOUT.Outside of the orange peel is the inside of the box.That should certainly make drying times faster.Second, they are all PRESSED somehow.t

The instructions I read said that you soak the peel several years in water and then turn the peel INSIDE OUT, before curing it. Maybe you would have better results doing it that way.

Maybe go with Pomelo (the largest of the citrus)... give yourself lots of room to work! http://en.wikipedia.org/wiki/Pomelo