Back when I was a kid, we never had the Internet, or even computers - we had to entertain ourselves.

Here's a slightly up-to-date version of a cool science toy that I made way back then - the Pressure Diver. 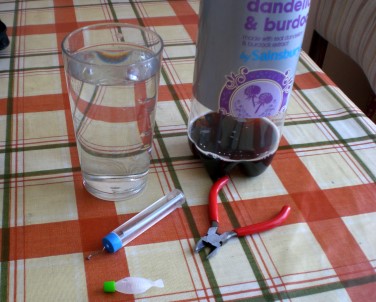 You'll need:
- A large transparent plastic fizzy drink bottle (a tall one is best)
- A small plastic capsule or container (mine was a little plastic fish-shaped bottle that contained soy sauce in a supermarket pack of sushi)
- Some sort of ballast (I used solder, but other wire, or even sand would do).

You'll also need a large glass of water to test the buoyancy. 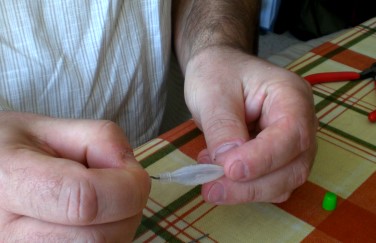 Add pieces of the ballast (in this case, small cut lengths of solder to the plastic capsule

If you can't find a little bottle like this, anything that traps a small amount of air will do - a very small balloon, plugged with a small glass marble, for example, would probably work - and the marble itself would be the ballast. 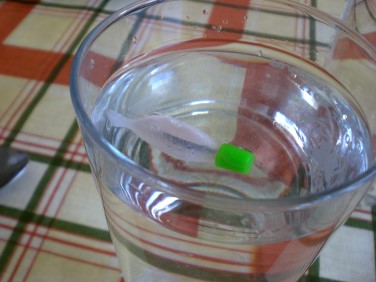 Test the buoyancy of the capsule - it should float, but only just.

Adjust the ballast until it floats, but doesn't protrude much above the surface of the water. 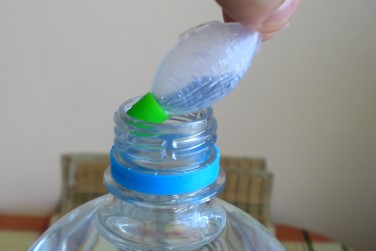 Remove the label from the plastic bottle, rinse it out, then fill it right to the brim with water.

Drop the capsule into the neck of the bottle and screw the lid down tight. 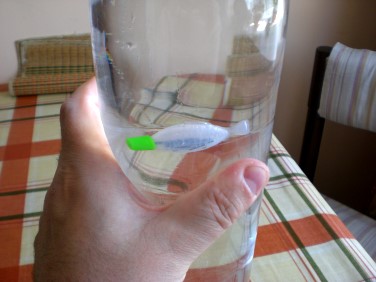 Squeeze the bottle - and the fish should sink.

Let go - and it floats back up again.

Here goes for an attempt at explaining how and why this works...

Air is readily compressible - that is, when you squeeze it, it doesn't really mind taking up less space.

Water is not very compressible at all - so it resists being squeezed.

You can test this with an empty plastic bottle - screw the cap on when it's full of air, and you can squeeze it a bit (and it springs back) - fill the same bottle with water and it will be almost impossible to squeeze it out of shape.

So when you squeeze the bottle in this experiment, you increase the pressure inside the bottle; the water won't compress, but the air inside the little plastic fish does, but that doesn't entirely explain why it should sink. 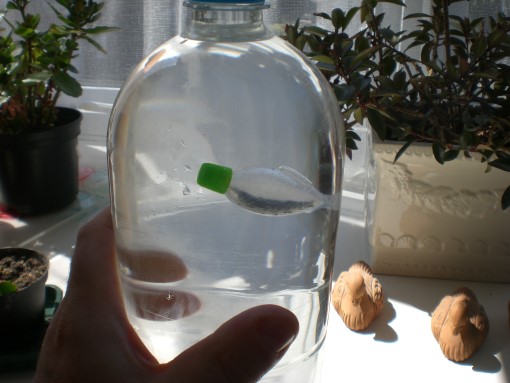 So... 1 cubic centimetre of water weighs one gramme - let's say you've got a 1cm cube of wood that weighs half a gramme; when you drop the wooden cube into the water, it'll float only about half submerged, because the half-gramme weight of wood is only enough to displace half a gramme (=half a cubic cm) of water.

A 1cm cube of copper weighs nearly 9 grammes - when you drop this into the water, the maximum volume it can displace is 1 cubic cm - so there's never a point where it has displaced its own weight of water - and so it sinks.

Back To The Fish

So, when the fish is placed in the bottle, it floats (just) - which means that it's weight is less than the weight of its own volume of water. But when you squeeze the bottle (because the water won't compress), the fish gets smaller - now, it weighs just the same, but it's volume is smaller than its own weight of water, so it must sink.

Lol i used to do this as a kid .... except I used a lego space man. Took a bit of effort with blue tack in his body to make it just short of neutrally buoyant. Squeeze bottle and he would sink.Btw your youtube video on led bulbs saved me from buying

We used to make these in school with isopropyl alcohol, a paperclip, a plastic test tube and some blutac to sealIf I recall correctly, by varying the amount of air/isopropyl/water in the tube, you could get a diver that was slightly more buoyant than t

You can use a glass bottle and create the pressure by pushing the cork. When I was a kid my uncle did it in such way that I could not tell he was applying pressure to the cork and it looked like magic.