Exploring The Solent Shore - From Meon Shore To Hook 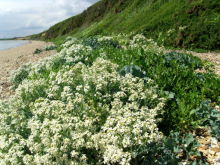 This is the first in a series of articles, exploring the Solent shoreline and immediately adjacent lands.

25 May 2008 - we packed a loaf of Feast Bread, some fruit and a couple of flasks of coffee and drove to Meon Shore

We took a circular route - from Meon Shore, we walked northwest along the narrow strip of beach below Brownwich Cliffs - as far as the Solent Breezes Holiday Camp, then we turned inland past Chilling farm, back alongside Brownwich Pond, following footpaths and bridleways back to our starting point at Meon Shore - a round trip distance of approximately 5 miles. 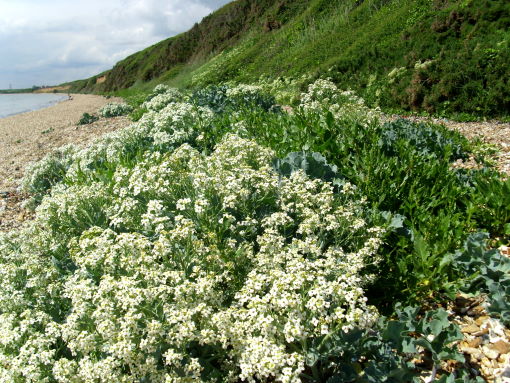 A little way past the row of beach chalets on Meon Shore, the narrow beach becomes quite interesting - with a diverse range of seaside vegetation (left: seakale in full flower). Shells, driftwood and sea glass are abundant here. 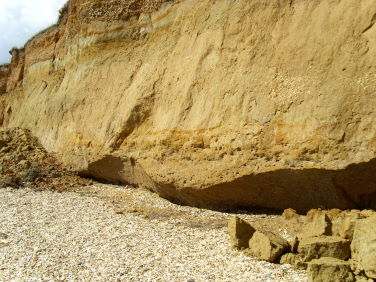 After about a mile, the beach is crossed by a little stream - running out of Brownwich Pond (which we passed later in the journey) - and after that, the steep bank at the top of the beach is replaced by vertical cliffs of clay, sand and shingle.

Caution must be exercised here - for a couple of reasons: The cliffs are unstable and prone to collapse (as you can see in this photo, they're undercut by the waves at exceptionally high tides) - and that's the other potential hazard - we went there at a high tide of 4.14 metres - there was just about enough beach left to be able to walk along out of range of any potential cliff collapse, but only just. Higher water could mean that you have to walk closer to the cliff face than is safe, or a rising tide could even cut you off and leave you stranded - check the tides before you walk here. 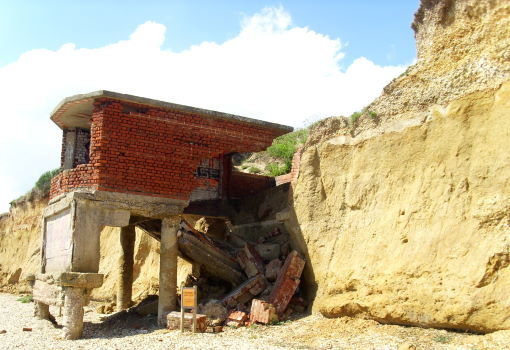 A little way along Brownwich Cliffs, a number of derelict gun implacements can be found - presumably dating from WWII - one of them is so undercut and ravaged by the waves, it has begun to collapse and it cannot be very many more years before it will tumble completely onto the beach.

There's usually plenty to see out on the water too - numerous yachts tacking upwind, then sailing back down with their huge colourful spinnaker sails out, big container ships on their way into Southampton - even Fawley refinery and power station looks more like scenery than industry from across the water here

At the end of Brownwich Cliffs is a caravan holiday park - it was not possible to go much further at high tide - and indeed at low tide, walking further along the shore probably means crossing soft mud and sand - and anyway - it would mean leaving The Solent and moving into Southampton Water. We turned inland towards Little Chilling Farm.

On The Way Back 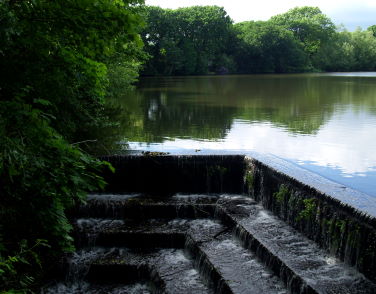 The key landmark on the inland journey back to Meon Shore is probably Brownwich Pond - on a hot day (as it was when we made this trip), the cool woodland shade at the pond's outlet weir was quite welcome.

From the end of Brownwich Cliffs, we travelled inland along one of the network of well-marked footpaths - for the nature-lover, there was plenty to look at - well-established deciduous hedgerows teeming with birds and insects and rich with wild flowers - here are just a few of the things to be seen: 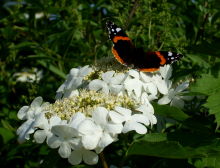 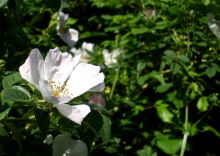 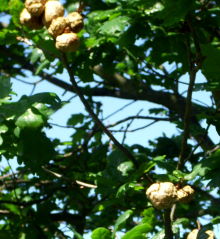 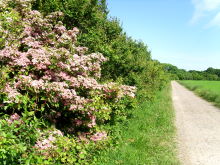 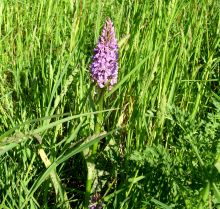 Several species of Orchid (this one is the Common Spotted Orchid, I think)

Back At Meon Shore

There are numerous footpaths and bridleways through the area - we got a little lost on the way back, but eventually found our way to Meon Road and followed that back to the beach.

At the beach, public toilet facilities are available and there's usually an ice cream van.

An interesting footnote - although this place is quite local to me, I had been saying the name wrong all the time. I later learned that 'Brownwich' is pronounced to rhyme with spinach.

I walked this route again in February 2015.  The gun implacement I saw previously is just... gone.

I looked and looked, and for a long time, could find not trace of it at all - I thought maybe it had been demolished and carted away, then the tide went out and I found the remains...

All that was left of the structure was a strewn-out array of chunks of broken concrete and weathered bricks - some still joined together.

Nothing lasts forever, but I still found this a little sad.  I guess it was good that I saw it while it lasted.