Moths Get Red Eye Too

I was called upon by my daughter to remove a fairly large moth from her bedroom one evening, which I did, using the glass-and-card method - I did this primarily to avoid injuring the insect during capture and relocation - I'm not at all squeamish about handling moths, but they will tend to damage themselves in trying to escape from a human hand.

As I turned to leave the room with the captive moth, I noticed two tiny, glittering brilliant pink jewels on its head - after a little bit of moving around and changing angles, it became apparent that these were cats-eye type reflections - from those compound eye elements pointing in my general direction, appearing when the light source was more or less behind my head.

I took a flash photo of the insect in the glass - here it is (and I promise this photo is completely undoctored): 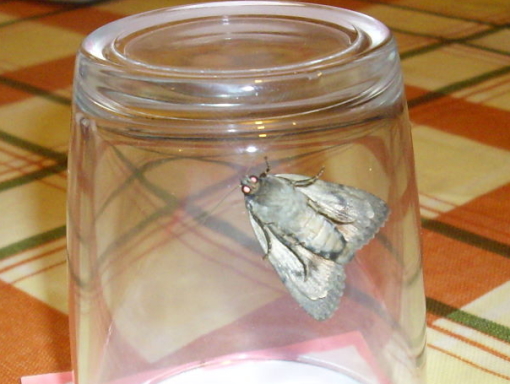 So when insects get their photos taken with a flash, they suffer from red-eye, just like everyone else. Must be a bit of a nuisance at insect parties and social events.

At first glance, it may look like the phenomenon displayed in this photo isn't Red Eye at all, but just normal specular reflection from the surface of the eyes, if they were a sort of metallic red colour. They're not though - they're fairly dull, dark brown when viewed under ordinary lighting conditions.

What this actually is, is the reflection of light, back along its path of incidence. Moths have compound eyes - that is, they're made up of a mosaic of individual photosensitive units, each capped with its own individual lens. So each bright pink spot is actually composed of the reflections from a number of different eye-units - just the ones that happen to be pointing in this general direction on each compound eye.

Observing This Effect For Yourself

But don't take my word for it - you can see this effect for yourself in the comfort and safety of your own home.

Next time you see a moth climbing up the outside of a window at night, grab a portable light source and shine it on the insect from inside the window - if you place your head close to the light source, you should be able to see two tiny glittering spots of light reflecting back from its eyes.

What Causes Red Eye In Photos?

The phenomenon known as Red Eye that plagues flash photography is caused by light reflecting back toward the camera from the retina of the subject - in cases where the light source is close to the camera lens (or observer), the light reflects back along a similar path to the one on which it entered.

Another way to think of this is that the part of the retina you can see, is the part that can see you.

There are a number of different ways in which Red Eye can be minimised:

Move the flash away from the camera lens

Putting lateral distance between the camera and flash means that the area illuminated on the subjects retina may not be visible from the camera lens - light will still be reflected back toward the flash - the camera just won't see it. This isn't easily possible with compact cameras.

Shine A Light At The Subject Before Taking The Photo

In Humans and some other subjects, a bright light or pre-fire of the flash will cause the eye's pupil to constrict, limiting the amount of flash light entering and leaving the eye.

Downsides of this approach include loss of spontaneity - your subjects will react to the bright light and may flinch, close their eyes or perhaps move, thinking the photo has already been taken. Also, it doesn't work at all for subjects whose eyes have no pupils, such as our moth here.

Most photo-editing software applications include features specifically designed to remove Red Eye from pictures - employing a number of different strategies, from simple overlaying with a dark coloured circle, colour desaturation of the red spots, or in some cases, replacement of the whole iris and pupil with a digitally-generated version.

It's typically quite easy to do this job badly and replace spooky-looking red eyes with non-red ones that look even more spooky or unnatural.

Ask The Subject Not To Look Directly At The Camera

Ummm... because everyone loves photos of people who look like they're not interested, or not paying proper attention?