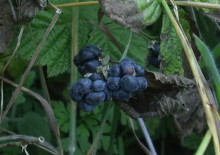 Rubus caesius - A close relative of blackberries and raspberries, the fruits are borne on plants resembling bramble canes, although generally lower-growing, slightly less spiny and with paler green leaves. 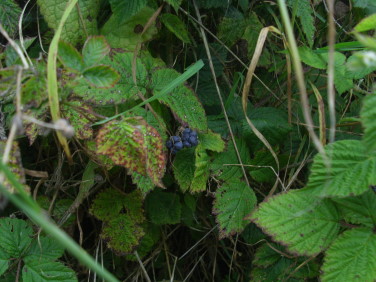 It tends to be overlooked, for a number of reasons - it doesn't fruit prolifically, the fruits are often low down and hidden beneath the leaves and they somewhat resemble malformed, mildewy blackberries.

In fact, the surface colouration is just a waxy bloom - similar to that often found on plums, blueberries and grapes. 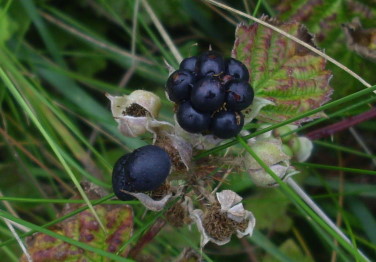 It's not at all unusual for them to consist just of one or two large drupelets, instead of the normal spherical cluster - but these specimens can still be picked.

The fruits do tend to break apart when picked, staining the fingers, but the individual drupelets themselves stay fairly intact and can still be used. 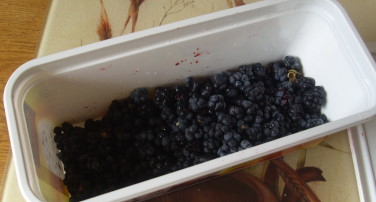 I could probably have picked ten times the amount of blackberries in the same time as it took me to pick this half pound of dewberries, but the blackberries aren't ripe yet (dewberries ripen up to a month earlier).

It's just enough to make a few little tarts...

Then I put the dewberries in a pan with just a tiny splash of water and about half their own weight in sugar. I gently heated this until the berries burst, releasing their juice.

I stirred 2 level teaspoons of cornflour (cornstarch), premixed with a couple of tablespoons of water, and stirred this in while turning up the heat. The cornflour thickened the juice just sufficiently to set it to a velvety jelly-like consistency.

Before I started, I had reserved a dozen of the nicest-looking dewberries - one to top each of the tarts. 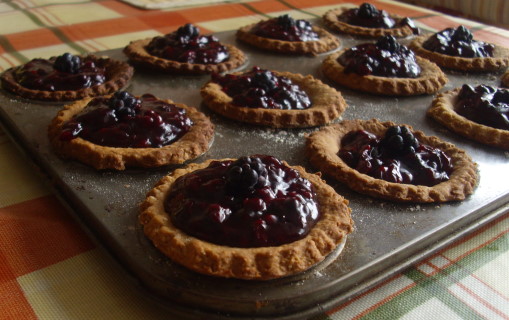 Picking dewberries is far more laborious than picking blackberries, which they resemble, so is it even worth it?

I would answer yes, for a number of reasons: