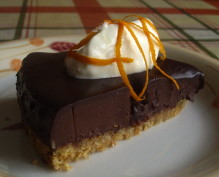 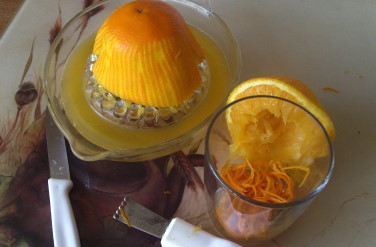 Pare the zest off the orange using a citrus zester or a fine grater, cover and set this aside.

Squeeze the juice from the orange 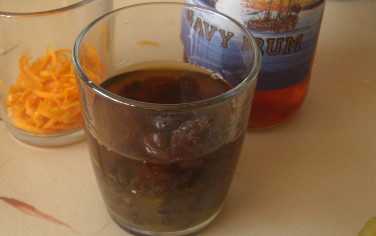 Place the raisins in a glass or cup and pour over the orange juice - top up with rum to cover them completely.

Ideally, the raisins should be left to soak for a few hours, but you can speed up the process by warming the mixture up in a microwave - they they will soak through in half an hour or so. 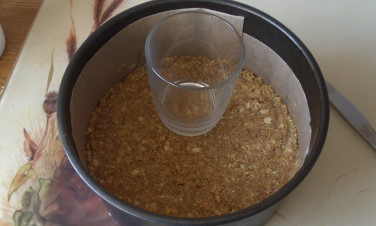 Melt the butter and mix with the biscuit crumbs and sugar.

Press the mixture firmly down into a loose-bottomed cake tin using the flat base of a tumbler. Leave in the fridge to set for at least half an hour.

NB: I've lined just around the edge of the tin with a strip of parchment, as this will help when it's time to turn out the torte. 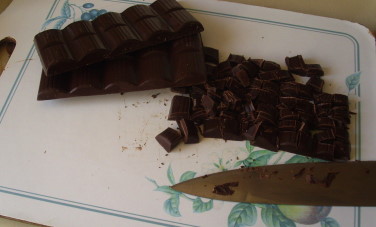 Pour the cream into a pan and heat it gently (do not bring it anywhere near the boil!)

Chop up the chocolate into small pieces.

Add the chocolate to the warmed cream. Keep stirring over a very gentle heat until it is melted and combined.

(There may be a moment, halfway, when it looks lumpy and unmixed - just keep going until it's smooth, but don't overheat it)

Optionally, you can add a couple of tablespoons more rum into the chocolate and whisk it in, but don't overdo it, or it will never set. 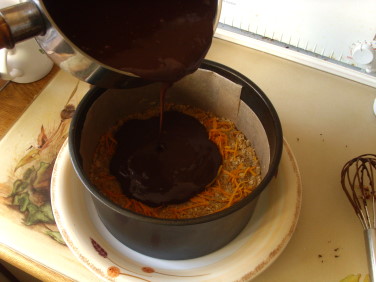 Drain the excess liquid off the raisins then stir them into the chocolate.

Spread the orange zest evenly over the biscuit base.

Pour the chocolate mixture on top - it will spread itself evenly, but you might need to direct the raisins to distribute evenly as you pour.

Allow to cool for ten minutes, then place in the fridge for at least three hours - ideally overnight.

When completely and firmly set, the torte can be turned out and will be easy to cut neatly with a sharp knife. 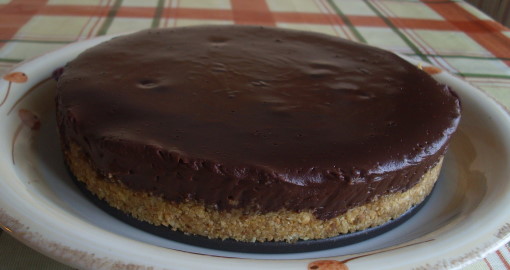 Serve with scoops of good vanilla ice cream, or (as at the top of the page) with creme fraiche. Garnish with a few strands of orange zest. 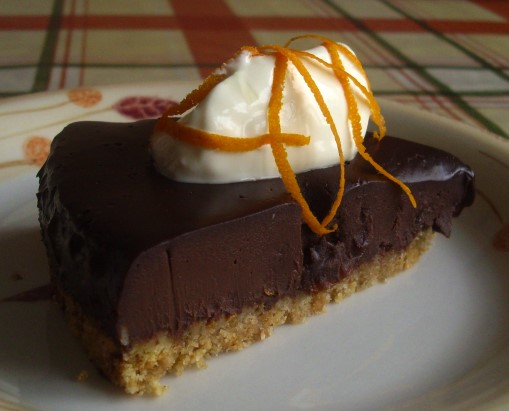 As long as you match each gramme of chocolate to a millilitre of cream, it will set to a perfect soft fudge-like texture. 300g of chocolate/300ml of cream is plenty for a 7 inch diameter tin.

Ginger biscuits could be used instead of digestives for the base - and little chopped pieces of crystallised stem ginger could either be mixed into the chocolate filling, or presented on top as a garnish.

This chocolate confection is called Ganache and versions of it are used to make chocolate truffles.

It can just be served in little pots - either to eat on its own as a dessert, or as a sauce for ice cream. I used little plastic containers here but liqueur glasses would look nicer.

Although the tin I used is nonstick, I lined it with a strip of parchment to help the torte come out in good condition. 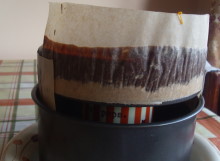 The loose bottom of this tin has to be pushed upwards to come out - I find the easiest way to do this is to stand it on a large mug, then push down the sides.

Initial cleaning of the utensils is in this case, not entirely a chore...