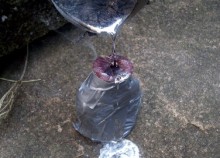 On a previous page I made a small cast pewter horse - I'm going to have another go - to see if I can improve on a few of the shortcomings of the last time. 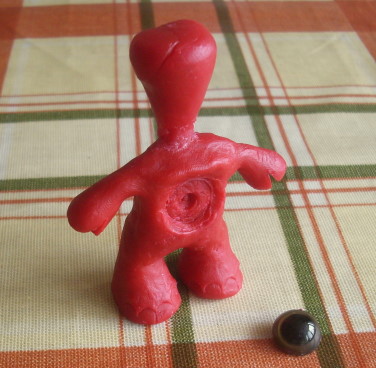 Here's the wax prototype for my next attempt - complete with the funnel-shaped part for its pouring channel.

My son found the toy glass eye you see in the foreground - but only the one, so we're making a one-eyed monster. Possibly a relative of Grek. 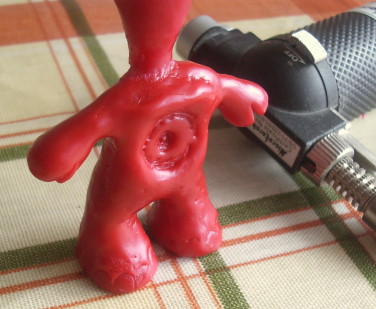 I decided to try to get a smoother finish this time - so I 'polished' the wax form by very gently applying the flame of a chef's blowtorch over it - enough to melt just the surface, but not enough to destroy any of the detail, or make the wax run or drip.

Last time, I used an air-drying clay for the mould - and I think it didn't ever dry out completely, resulting in steam -blown voids in the final cast. This time, I'm using real clay, dug from a river bank.

Next, I chilled the wax form in the fridge, to harden it - so it wouldn't be damaged or distorted during handling.

Then I added the clay - quite soft and moist, which made it quite easy to force into all the details and crevices. 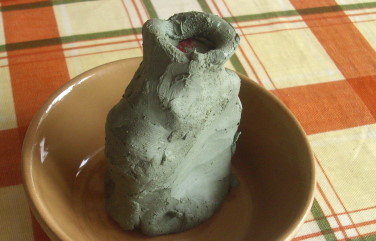 I finished off the mould - adding an extra lip around the pouring channel, and an extra bit at the bottom - to stabilise the mould when upright, and to hang it between the oven bars when melting out the wax.

Now I've just got to wait for the clay to dry out completely. 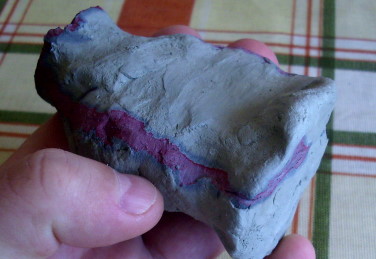 A week later, the clay had dried hard, so I suspended the mould upside down over a dish in the oven and melted out the wax, gradually increasing the temperature from 100 to 200 C - so as to drive off some more moisture from the clay.

Some of the wax came out of the sides of the mould - cracks are a bit worrying, so as before, I bound the mould with duct tape to prevent it breaking apart when exposed to the hot metal. 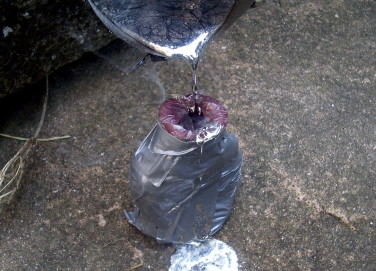 I melted the pewter in the same can (about half of it was the metal left from last time, but I did have to add more (another dented pewter tankard from the charity shop).

This time, there was no jet of steam from the pouring hole, although the centre of the sprue did sink inwards quite a lot as it cooled. 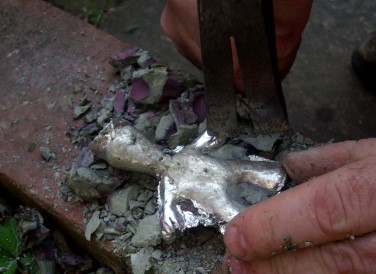 This was a more substantial cast than last time and it took longer to cool to handling temperature.

I carefully cracked away the clay - some of which was now baked quite hard. 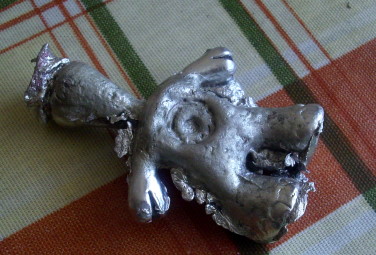 There appears to have been considerable internal cracking in the clay mould - presumably either during drying or just as a result of me not pressing out all the air between the pieces of clay I applied..

This has resulted in lots of messy flanges on the cast, but it's preferrable to voids, as I can just file these off.

After cutting off the sprue and filing away the excess material, using a progression of smaller and finer files, I glued on the glass eye using polyurethane cement. 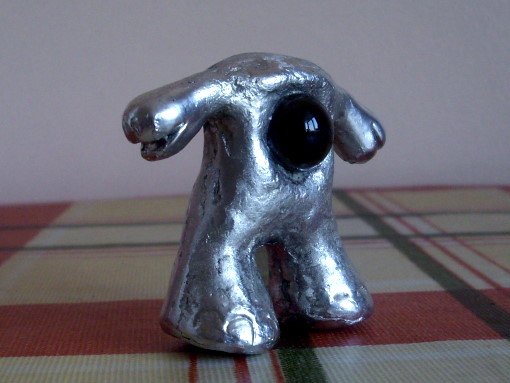 Past And Future Projects

In case you landed directly here, the pewter horse casting project I mentioned at the top of this page is here.

I've still got some more pewter to use up - I'm going to try again sometime using plaster of Paris as a mould material - this should permit much finer detail, as there's no need to press the mould onto the wax.

I also intend to have a go with casting copies of objects by pressing them into cuttlebone, then using that as the mould.

Another possibility is the use of silicone to create moulds directly from an object - there are silicone compounds available into which pewter can be cast directly, or alternatively, a silicone mould could be made from an object, then used to cast multiple wax forms for the wax/clay method I've already used.