This hearty bean bake is just perfect as a warming meal after coming in from the cold.

It's based on a substantial soup - it needs planning ahead and making over the course of a couple of days, but the end result is well worth it.

This recipe is based on 'Grandma's Onion Soup', given to me by a friend - which original recipe results in a deeper and richer flavour in the final dish, but at the expense of hours of slaving over a stove.

This version is still really good, but can be left mostly unattended while it cooks. 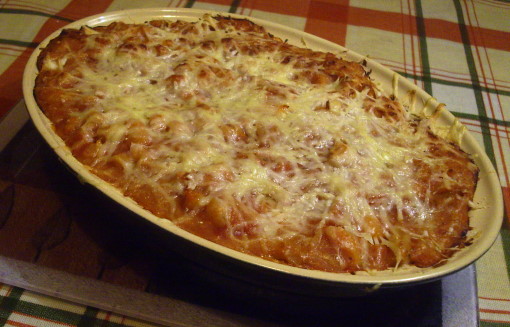 To complete the dish 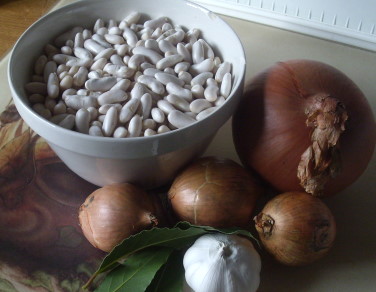 This recipe requires a fair bit of work in advance - to begin with, the dry beans must be covered with plenty of cold water and soaked overnight.

Any haricot-type beans can be used here, but not red kidney beans, as the liquid in which they are originally cooked must be discarded.

Precooked canned canellini beans could be used, but care will need to be taken not to break them up, as they will already be soft. 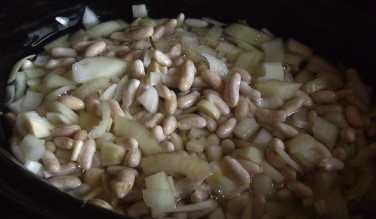 I cooked my soup in a slow-cooker, but a large covered casserole dish in a low oven will also work.

Drain any remaining water off the beans and put them in the dish, along with the onions, chopped to medium dice, the bayleaves and the garlic cloves, peeled and coarsely chopped.

Add just enough water to cover the ingredients, then cook on low until the beans start to soften (about 5 hours in a slow cooker, or maybe two hours in a casserole in the oven). 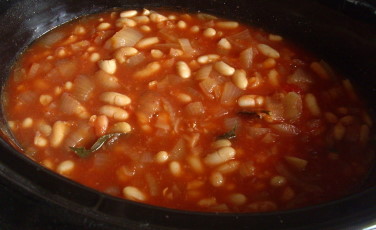 When the beans have started to soften, but are not completely cooked, add the canned tomatoes, tomato puree and paprika.

Stir this and continue to cook until the beans are completely soft and almost breaking apart. 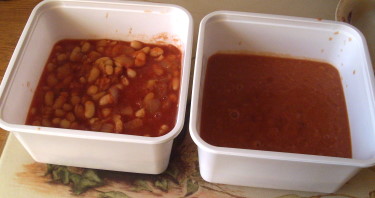 Remove the Bay leaves and divide the bean soup in half - use a hand blender, food processor or liquidiser to puree one half, but leave the other half exactly as it is.

I stopped here and left the soup to cool for use the next day, but there's no particular reason why you shouldn't just continue here. 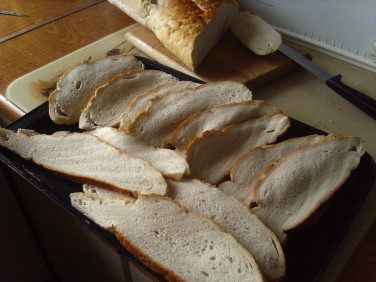 Next, slice some white bread thinly and spread it on a baking tray - toast in the oven until it is crisp and starting to brown.

I used a white bloomer here, but any good white bread will work - baguettes or ciabatta, for example. 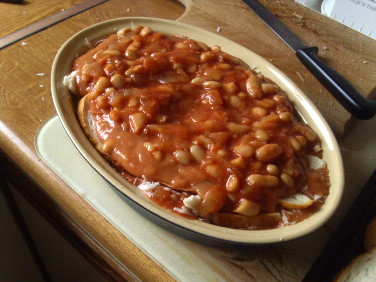 Cover the bottom of a large ovenproof dish with slices of bread, then spoon over a generous layer of the soup (puree first, to soak in, then chunky on top), grate about half the cheese on top of the beans, then repeat the layers. 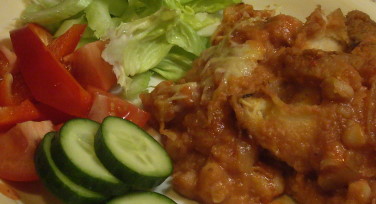 The prepared dish can be cooled and stored in the fridge until needed, or frozen and thawed later.

From cold, it will take about 25 minutes in a hot oven (190C), until it starts to bubble and the cheese browns.

Serve on its own in bowls, or with salad.