« Lime Leaves - Sock It To Me - Also Sock Zarathustra » 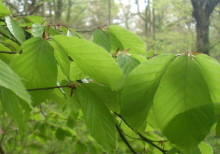 I went out for a walk at Crab Wood, near Winchester - chiefly to enjoy the bluebells, but I came home with a bag full of beech leaves, to try making beech leaf gin. 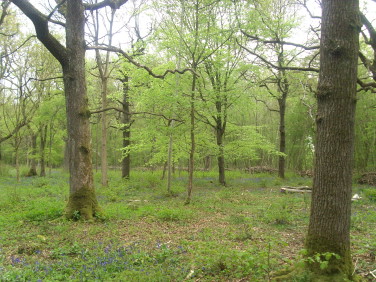 Photographs can never come close to capturing the vibrancy and freshness of spring in a beech or mixed deciduous wood.

The bluebells are a case in point - in this picture, they appear as nothing more than a few smudges of bluish colour - in reality, they were a stunning flying carpet of striking purple - not to mention the heady fragrance.

Anyway, that's a beech tree in the centre - and it's the leaves we're after now. 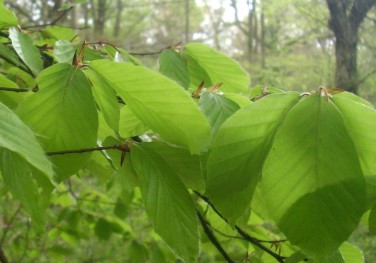 The emerging leaves are brilliant translucent lime green, slightly downy at the edges and corrugated when they first open - when they first flatten out and inflate to their normal size, they're as soft as tissue.

I picked only a few from each tree so as not to cause too much damage - and this was no inconvenience, as the trees were abundant.

Beech leaf gin appears in at least a couple of my wild food books, although I think maybe one of them mentions it in reference to the others.

It sounds a fascinating idea - a pale green liqueur that contains the extracted essence of spring - I've got to try it. 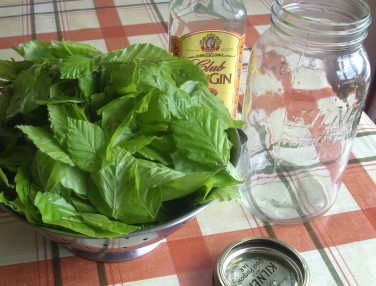 I picked about a colander full of young leaves and returned home with them.

I separated them from the little brown shreds of bud casing that were still clinging to the stalks, then packed them into a large Kilner jar.

This took a surprisingly long time - just because the leaves are so thin and delicate, it takes a lot of them to fill a jar.. 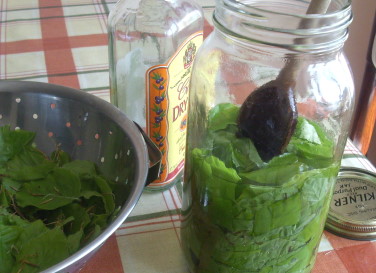 I poured over the whole bottle of gin and pressed the leaves down with a wooden spoon, to remove all the trapped air.

I'll now have to wait a fortnight before draining off the liquor and adding sugar. I've no idea what it will taste like, but it should be interesting - and comes with the recommendation of several of the authors of wild food books in my collection. 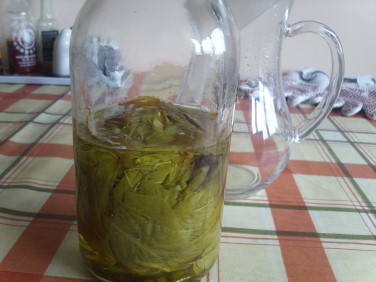 A week later, it looks like it's infused as much as it's going to - the leaves near the top have a tendency to turn brown - I think this is because there is air in the top of the jar.

I'm going to take the leaves out now. 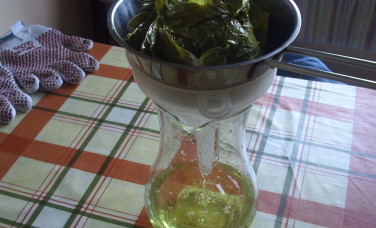 I strained the gin using a coarse strainer in a funnel into a jug, then poured it through a finer strainer into the original bottle.

I've got to say, I have my doubts about this stuff right now - it doesn't really smell great at all - it's got a sort of composty, slightly sulphurous aroma. But I'm going to have to proceed on the assumption that this is normal at this stage. 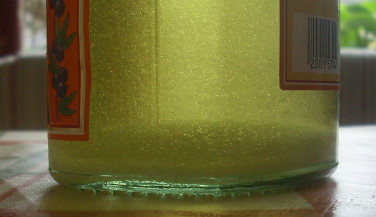 The bottle had about half an inch gap at the top - some of the original gin has been lost to the leaves and the process.

I topped this up with a couple of tablespoons of sugar and gave it a few shakes every now and again for the rest of the day, until it was all dissolved 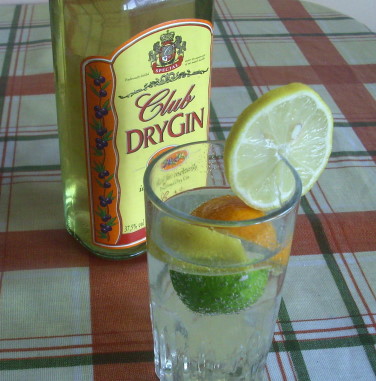 I left it about six weeks, with the bottle wrapped in paper to prevent the light spoiling it.

I poured some in a glass and tasted it unmixed - the flavour is quite delicate - fresh and slightly fruity, but with a surprisingly powerful woody/earthy backnote. The taste does actually bring back - in a real, not poetic sense - some of the scents of springtime in the woods.

I poured a little more and mixed it with tonic, with a few wedges of frozen citrus fruits thrown in - it's a milder, rounder drink than straight gin and tonic (some of that will just be the sugar) - I don't think I really like it this way, as it dulls the refreshing zing of a G and T.