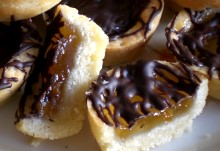 The cases are made from the same Scots shortbread recipe I used for my Games Night Biscuits. 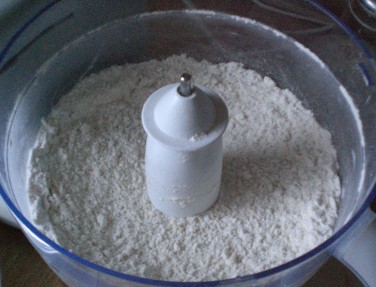 You could use the rubbing in by hand method described for the games night biscuits (see link above), but I was in a hurry, so I used the food processor to blend the butter with the flour, ground rice and sugar.

Once it was blended to a fine crumbly texture, blending whilst adding very small amounts of water will start to bring it together into a dough, You don't need much water at all - only a few tablespoons. 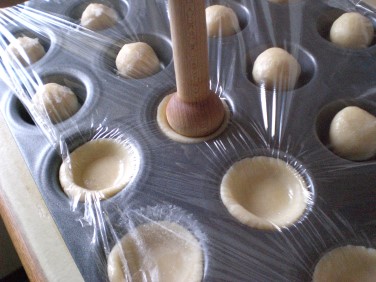 Use the dough to line a tart tray (this one is for mini tarts and is lined by squashing a little ball of dough with a special tool, causing the edges of the case to extrude up the sides).

I had terrible trouble using this initially - the raw dough just kept sticking to the wooden implement - then I hit upon the idea of pressing through a sheet of clingfilm - this works really well.

A non-stick baking tray like this one doesn't require any greasing for a recipe with this much butter in it. 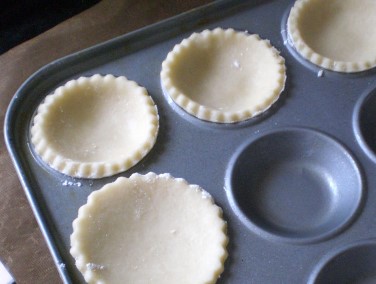 Alternatively, the dough can be rolled out to about 3 or 4mm thick and cut with a circular cutter, then dropped into the holes in a standard tart tray - it's soft enough that it should press down very easily into the depression.

This dough recipe makes enough for two trays of either size (so 48 little ones or 24 large ones) - I made one tray of each. 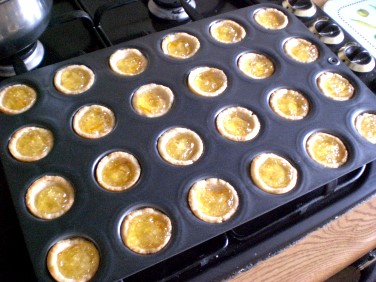 Place a small amount of marmalade in each of the pastry cases (the crust is thin, so there is no need to blind-bake them).

Be aware that the crust will swell a little as it cooks, and the marmalade will melt and boil, so don't fill them to the brim, or they will spill over in the oven.

Bake in the oven for 15 minutes, or until the edges of the crust are turning golden brown. Allow to cool in the tray for at least 5 minutes before attempting to handle them.

Remove the tarts to a wire rack as soon as they are cool enough to handle. if you leave them in the tray, two things will happen; they will baste in their own steam and won't be so crisp, but also any accidental spills of marmalade will set hard and glue some of them in place. 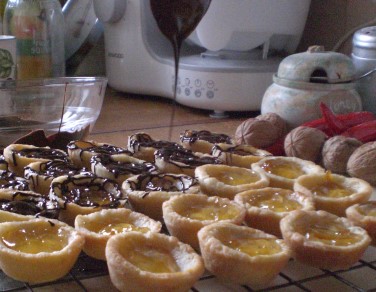 Melt the chocolate, either in a heatproof bowl set on top of a pan of boiling water, or just in a dish in the microwave.

Spoon the melted chocolate over the top of the tarts - I chose to drizzle it on from a height, so that the chocolate would set in strands and threads - you can be as neat or messy as you like here. 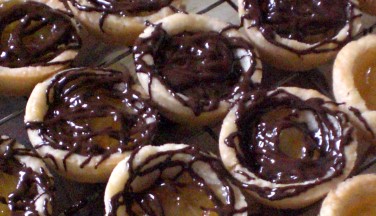 Part of the reason I chose to apply the chocolate in this way was that a large single blob of chocolate might set into a solid disc that can't be easily bitten in half.

Set the tarts in a cool place - avoid handling or transferring them until the chocolate is set (chocolate fingerprints on the sides will not be appealing). 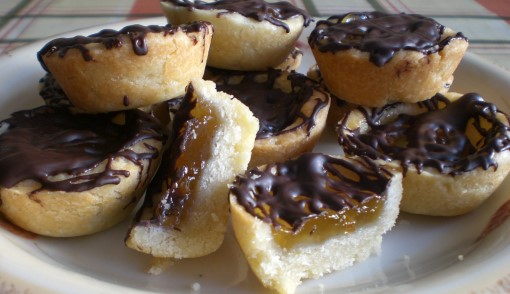 The flavour combination of chocolate and orange is a classic that's hard to top, however, almost any kind of jam or jelly would work in these little tarts.

It might be nice to make them in a whole variety of different flavours, contriving to cover the filling completely with the chocolate, so as to make the flavour a surprise.

A bigger surprise would be to fill one or two of them with Red Chilli Jelly, but maybe only try that one as a game of luck with willing participants.

Here's an as yet untested idea: Bake the pastry shells blind (empty), melt the marmalade filling in a saucepan and simmer it for a while to reduce it to a thicker jelly. Cool a little, then add some brandy, gin or an orange liqueur such as Grand Marnier or Cointreau. Pour into the pastry shells and allow to cool and set, then top with chocolate.