This was originally two different pages on the old version of the Atomic Shrimp website - during migration here, I noticed that they're both pretty similar, so they are now on the same page...

This is essentially cheesy puff pastry which we will then transform it into tasty party snacks. 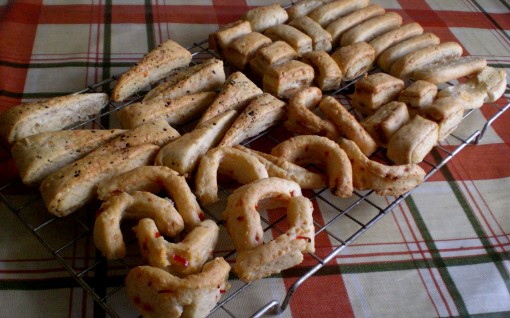 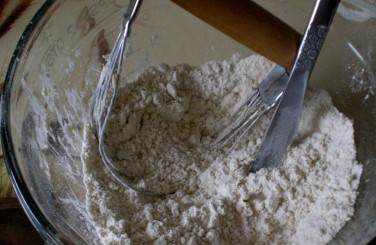 Sift the flour, into a bowl and rub in the fat with your fingertips or a rubbing in tool, like this one.

The fat to flour ratio in this recipe is quite low, so it won't form a breadcrumb-like texture - the fat will mostly just disappear into the flour. 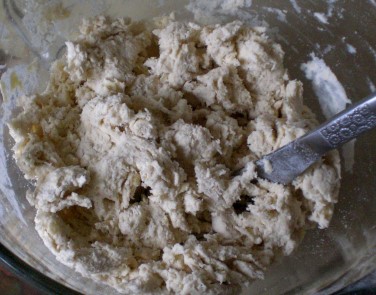 Add cold water in small amounts, mixing with a table knife until the mixture starts to come together into a dough.

Don't overdo the water here - about five or six tablespoonsful should be plenty (depending on the absorbency of your flour). The dough should no longer be dusty, but should not start getting too sticky either. 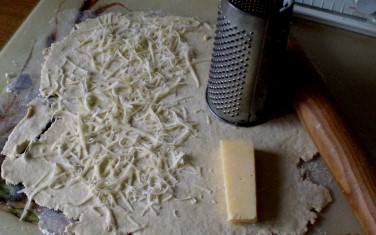 Roll out the dough on a floured clean surface - get it as thin as 3 or 4mm if you can.

Grate a thin, even layer of cheese directly onto half of the dough. 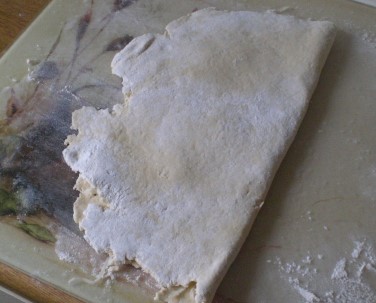 Fold the dough over to enclose the cheese.

Grate a thin, even layer of cheese directly onto half of the dough.

Turn and repeat this process, flouring the working surface as necessary - although you may find that you don't need so much as the dough develops.

By folding in the ragged edges in turn, you can tidy up the dough and end up with a nice neat looking rectangle, that will be much easier to use later. 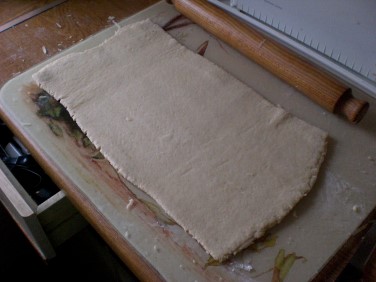 By the time you run out of cheese, you will have folded and re-rolled the dough maybe 8 or 9 times.

At this point, the pastry is ready to use. As the top crust of a steak pie (or even apple pie - cheese and apple is a good combination), this would be just fantastic, but we're going to make some party snacks.

Here's where you get to be creative - adding extra flavourings to make this pastry into tasty little nibbles. There are any number of possibilities. I divided the pastry into quarters, leaving one quarter plain and flavouring the others as follows: 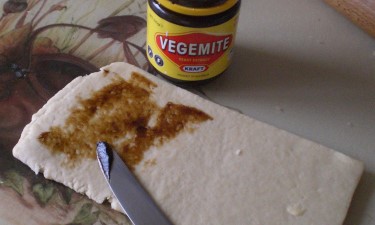 Vegemite. I actually prefer Marmite, but this happened to be in the cupboard.

Smear a thin layer of it over the pastry, then fold over and roll a couple of times, ending up about 8mm thick. 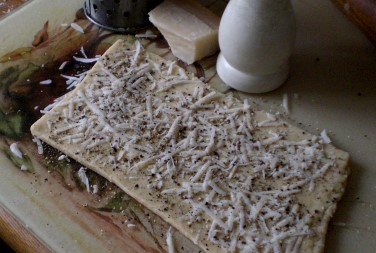 Add a thin grating of Parmesan and a grind of black pepper, then fold over and roll out. Careful handling is required here, as the dry cheese will tend to stop the folded layers joining together. 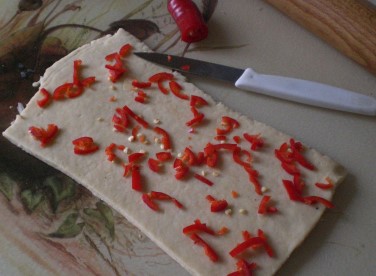 Red Chilli. Very thinly slice red chilli (complete with seeds - that's where the fiery heat lives) and add them to the pastry.

When you fold the pastry to enclose these, then roll it, they may appear to cut their way through the dough, but this isn't a problem. 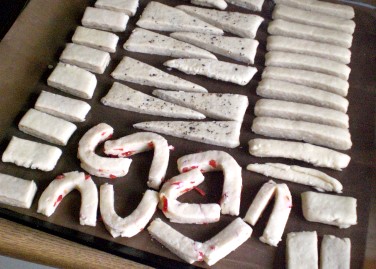 To make the different flavoured snacks easy to tell apart, cut them into different shapes with a sharp knife, then arrange on a greased or lined baking tray.

Bake in the oven for 12 minutes, or until golden and puffed up.

When you take them out of the oven, get them onto a wire rack as soon as possible, so they don't turn soft and doughy in their own steam.

Behold The Power Of Maths!

The reason this pastry is able to puff up is that it's composed of many thin, largely separate layers, Traditionally, puff pastry is made like this, but adding small chunks of fat before each fold - this is messy - cheese is a lot easier to handle and apply evenly.

The great thing, though, is that every time you fold and roll, you're doubling the number of layers - if you fold and roll 8 times, you'll have created 256 thin layers. At 9 folds, you have 512 layers - and so on.

I made four different varieties of snack, but many more are possible - limited only by your imagination and palate...

A sprinkle of oregano might be good. Combine this with a thinly brushed layer of tomato puree (or even ketchup) for pizza flavoured snacks.

Thin ham or tiny pieces of salami would be good. Cut them small and they will dry out in the baking process (but the snacks probably shouldn't be stored for long if they contain meat).

Small seeds such as sunflower, flax or sesame, folded into the snacks would add a tasty crunch. Pumpkin seeds are larger and might need a bit of crushing or chopping first. Alternatively, the seeds could just be pressed into the top surface of the dough and they will take on a toasted nutty flavour during cooking.

I used finely sliced fresh chillies in mine, but dried chilli flakes would work well. Or maybe curry paste or honey and wholegrain mustard.

There's really a great deal of potential to take this recipe in a huge variety of different directions - and of course, some of the ideas above could be used in combination.

Cut into long fingers or wedges, these cheesy puffs are great with dips, or just as a buffet snack. They also go well with soup.

These cheese straws are more crumbly than the cheesy puffs - they're good with dips or salads, or just as a tasty snack. 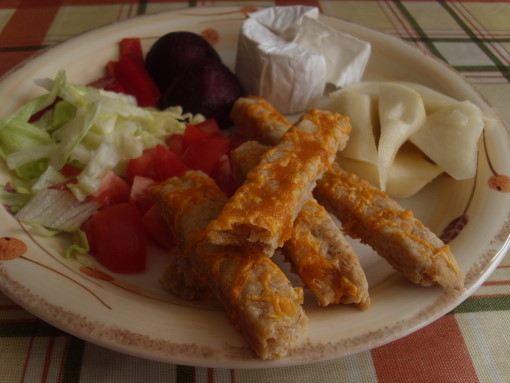 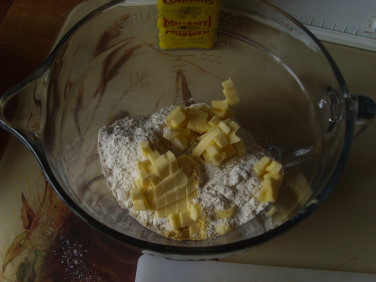 Mix the flour, salt and mustard together in a large bowl. Cut the butter into small cubes and mix it in so that the cubes are all separate and coated with flour. 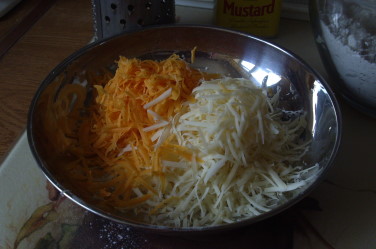 Grate the cheese - I'm using a mixture of two-thirds mature farmhouse cheddar (for flavour) and one third red Leicester (for colour). 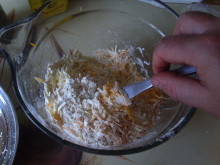 Add the cheese into the mixture and toss together so that the cheese doesn't form clumps.

Add small amounts of water and stir in until the mixture starts to come together into a soft dough - stop before it becomes at all sticky.

Preheat the oven to 150C 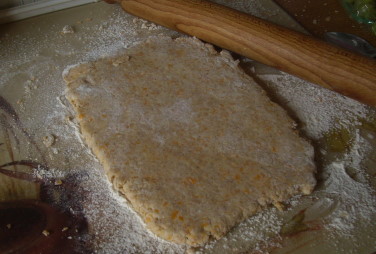 keep going just until you can no longer see distinct lumps of butter in the dough.

Roll out the dough to a little over half a centimetre thick. Cut into strips about 1cm wide.

Place the pieces on a greased cookie sheet (curl them into spirals or twists if you like) and bake in the oven for 10 minutes, or until golden brown - they should puff up a little as they cook. 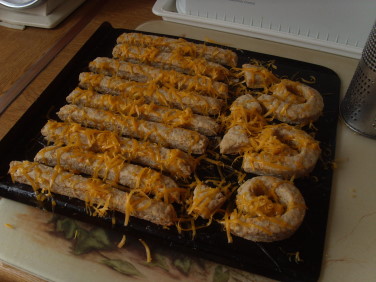 Optionally, remove them from the oven a minute before they're done and grate a little more cheese over them, then bake for just one more minute to melt and crisp up the extra cheese.

The water in this recipe can be replaced with white wine - it imparts a delicate flavour that combines really well with the cheese.

Other hard cheeses such as emmental could be used - or the straws topped with a little grated Parmigiano-Reggiano.

The dough can be rolled thinner and cut into circles or squares and baked as crackers (but keep an eye on them, because they will cook really fast that way).