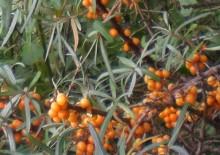 What Is Sea Buckthorn? 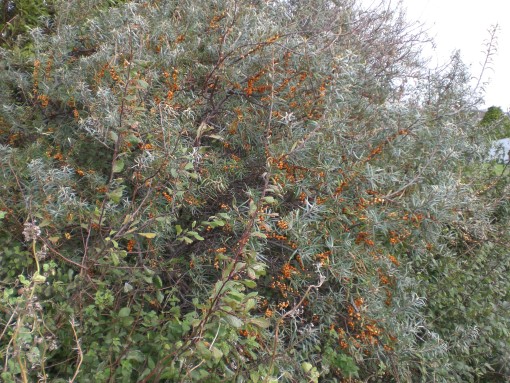 Hippophae rhamnoides - a stiff, wiry shrub with narrow, greyish green leaves which are almost like the needles of a conifer in appearance and arrangement. 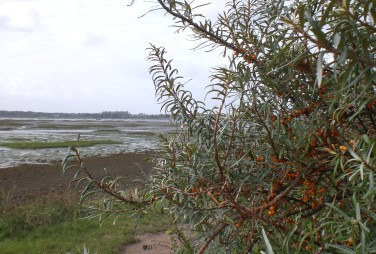 Male and female flowers are produced on separate plants - and on the female plants, these are followed by dense clusters of orange berry-like fruits, borne on short stalks along the branches.

The plant is only usually found within a few hundred yards of the shore. 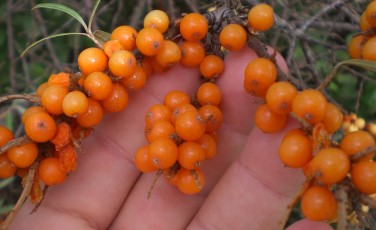 The berries are bright orange when fully ripe, but they're nearly impossible to pick in any conventional manner - partly because the plant is armed with vicious spines, but mostly because they are so juicy and fragile that they burst at the slightest touch.

If they remain intact on the plant into winter, they may freeze solid, which makes it then possible to pick them. 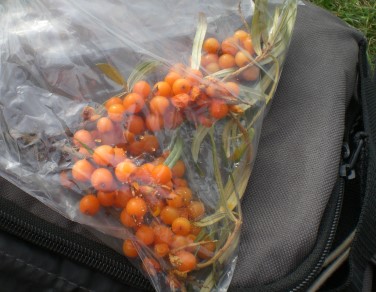 Otherwise, the only practical way to gather them is to pick whols sprigs of them, then bag them for processing later..

Obviously if this is done indiscriminately and in massive bulk, it will harm the plants - as it entails removal of twigs that would grow further and fruit again in future, 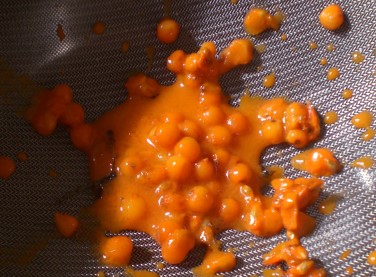 Back at home, the sprigs can be artifically frozen to remove the intact berries, but if you just want them for ther flavour, they can be squeezed off the twigs directly into a strainer over a bowl.

Don't attempt this without gloves - disposable polythene ones are OK - clean rubber household gloves are better, as they will afford a little protection from thorns.

Each berry contains a single hard pip, but the juicy pulp is easy to press through a sieve.

The berries are sharply acidic, but in quite an exciting, complex way, reminiscent of apples and passionfruit. They contain citric, malic, ascorbic (Vitamin C) and other acids. They're too sour to eat in any quantity on their own, but I think they'd make an excellent flavour enhancer, so I set about testing this.

My few sprigs of Sea Buckthorn berries produced a couple of tablespoons of brilliant orange juice.

To this, I added half a dozen apples, sliced and cored, plus a few tablespoons of sugar and a dash of water.

The first thing to notice is that the juice did an excellent job of preventing browning of the apple pieces. 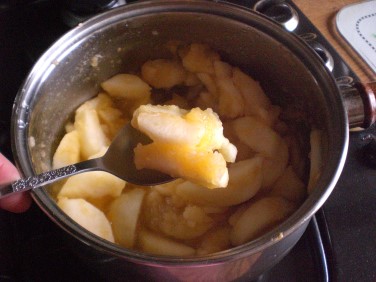 I simmered the mixture over a gentle heat for about five minutes, then set it aside to cool.

The vivid orange colour of the Sea Buckthorn juice wasn't lost in cooking - and gave a wonderful golden glow to the apple pieces.

I tasted some when it had cooled to room temperature. The Sea Buckthorn does have a distinct, pleasant fruity taste of its own, but it also made the apples taste more apple-ey. I expect this is the malic acid content.

I chilled the cooked fruit overnight in the fridge and served it with Greek yoghurt and some crisp, buttery biscuits - delicious. 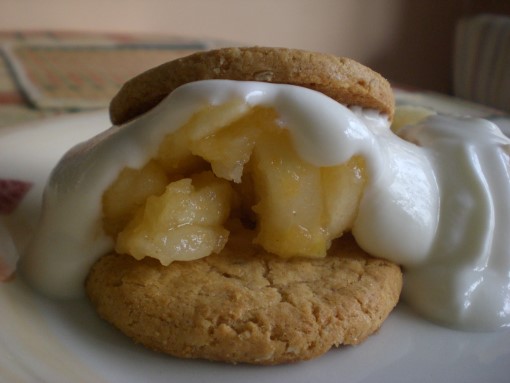 This plant deserves to be more commonly used - although acidic and fiddly, it has the kind of flavour and aroma that one might normally associate with tropical fruits such as mango or passion fruit.

It's perfect in combination with apples, but I suspect the unsweetened juice could also be used anywhere as a direct substitute for lemon juice.

The berries of this plant are very rich in Vitamins C, E and carotenes - they're practically naturally-occurring vitamin pills. I wonder why they're so overlooked here in the UK...

Sea buckthorn is not related to common Buckthorn (also known as Purging Buckthorn) which is common on chalk downland, bears clusters of black or dark purple fruits and is not edible - well, not unless you want to find out firsthand what 'purging' means.