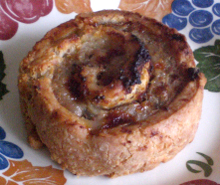 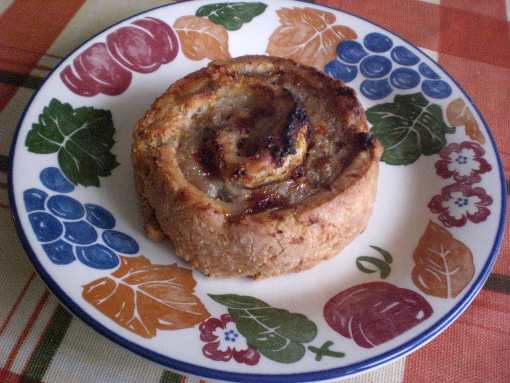 Here's a video version of the recipe instructions - scroll down further for the text/printable version.

To Make Toad In The Roll

Place the flour, butter and grated cheese in a food processor and blend until it resembles fine crumbs. If you don't have a food processor, rub the butter into the flour using your fingertips, then use a table knife for all subsequent mixing.

Add the egg and mix until blended.

Add cold water n very small amounts, mixing until the crumbs start sticking together, and can be pressed by hand into a soft dough.

Form the dough into a ball by hand on a floured board, then roll it out into a rough rectangle about 30 by 25 cm.

Remove the skins from the sausages and distribute the sausage meat across the rectangle of dough. Put a sheet of clingfilmn over the meat and use a rolling pin to even it out.

Remove the film and spread two heaped teaspoons of mustard all over the sausage meat.

Roll up the dough with the sausage meat inside. Cut the roll into eight equal slices (cut in half, then cut each half in half, then again). Arrange the slices on a metal tray and flatten them a little with the palm of your hand.

Bake in the oven for 25 minutes, or until golden brown and crispy.

These sausage swirl buns may be eaten hot or cold - as part of a main meal (they go well with baked beans), as a snack or for a picnic or packed lunch.

There's ample scope for variation in this recipe/concept - substitute your favourite sauce or relish in place of the mustard, or spread the sausage meat with caramelised onions, chilli flakes, bacon bits... anything you fancy.

And of course, you can use any kind of sausages - standard pork bangers, or flavoured ones - even exotic varieties such as wild boar or venison.