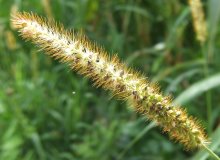 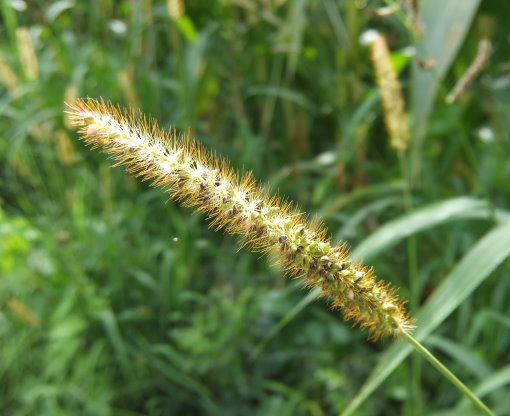 What Is Foxtail Millet? 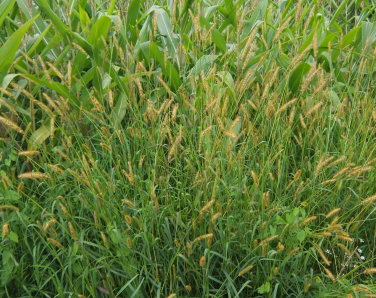 Setaria spp - although I'm not exactly sure which species of Setaria I have here - possibly S viridis - it's an annual grass with metre-tall stems, topped with bristly heads containing the seeds. 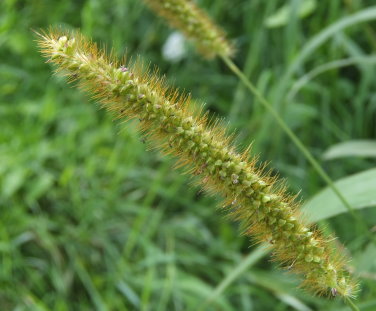 On closer examination of the seed panicles, it becomes clear why this plant bears the name 'foxtail'.

In some species, the bristles have barbs which cling to the fur of animals and the clothing of humans - but this one has fairly smooth bristles. 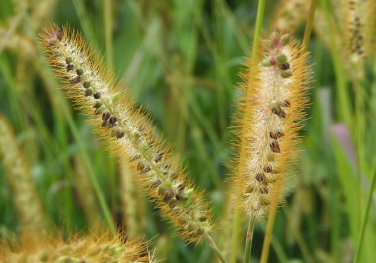 As the seeds ripen, they are ejected from the panicle, a few at a time.

From a distance, the ripening seed heads looked like they were infested with flies, but it was just the seeds coming out. 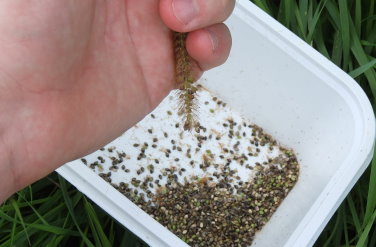 Harvesting the seeds by hand was pretty simple - just massaging the heads gently in hand and allowing the seeds to drop into a container below.

I did get one piece of bristle painfully stuck in my finger though - I reckon it might have just been an unlucky interaction of bristle and skin pore, but it was easy to remove with tweezers. By and large, the bristles stayed on the plant. 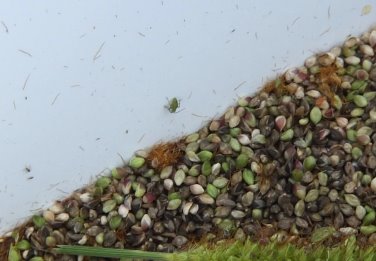 In a survival situation, it would actually be desirable not to clean the seed of all these little critters, as they represent an excellent source of vitamins, but I decided I just wanted the seeds. 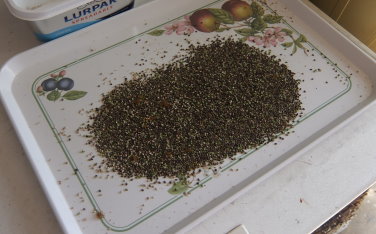 The easiest way to do this (and a technique I've used for other wild-gathered foods in the past) is just to spread them all out on a tray and leave them alone.

Over the course of a few hours, all the little bugs just crawl away.

Millet like this might well have been amongst the earliest of grains harvested and eaten by humans - and one of the things I like very much about this kind of wild food experimentation is the feeling of connection with a forgotten and distant past.

Foxtail Millet is sometimes planted as a fodder crop - and as I found this in the margin of a cultivated field, it may just be a remnant of a previous year's crop, however, the plant does occur in the wild in exactly this form. 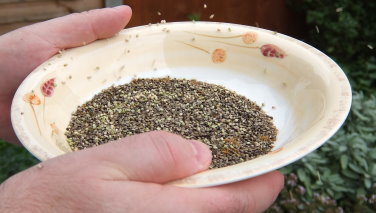 The seed was fairly clean at the start, but it did need just a little winnowing to remove a few husks and stray bristles.

If I'd been processing a large quantity of seed, I'd have waited for a windy day and tossed it in the air in a large shallow basket, allowing the wind to carry off the lighter debris, but with this small amount, I just put it in a shallow bowl and blew on it, shaking and agitating to keep the debris moving to the top of the pile. 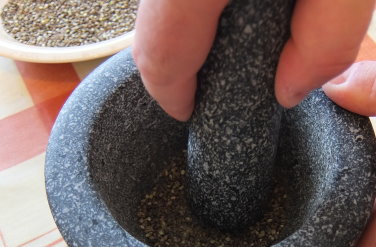 The plan was to grind it into some kind of flour or meal, then bake it into cakes or biscuits.

So I pounded and ground it with my granite mortar and pestle. 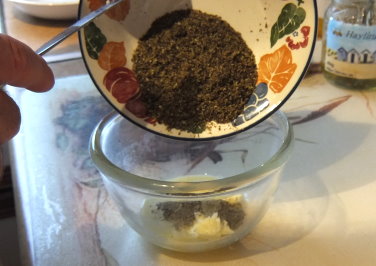 The result was 30g of reasonably fine meal.

I mixed this with 15g of butter and 15g of honey - it formed a sort of crumbly paste. 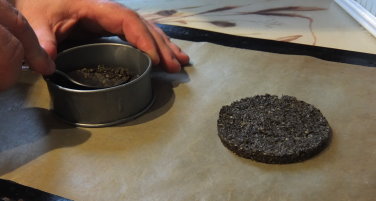 This wasn't any kind of dough, so I couldn't knead or roll it.

So I used a metal ring form to make it into two flattish biscuit shapes on a nonstick sheet.

I placed this in a preheated medium oven for 10 minutes. 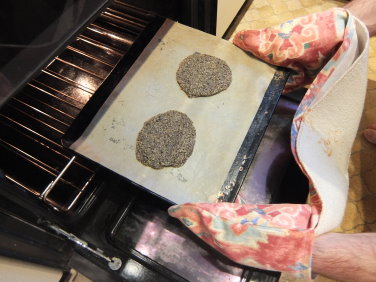 When they came out, they were extremely soft - so I left them to cool a little. 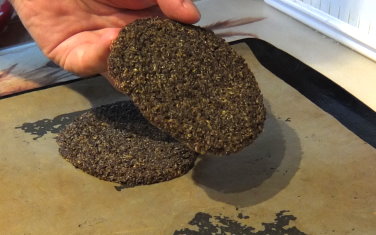 They smell great; they hold together (although I think the caramelised honey helped with that).

They actually tasted OK too, except the texture was awful.

In retrospect, it seems pretty obvious that the uncooked meal probably wasn't adequately hydrated - although butter and honey both contain water, there probably wasn't enough of it (or enough time) to soak into the meal and soften it.

I haven't given up on this plant as a potential wild food just yet - plan B will be to gather some more of this seed and try something else with it - maybe cook it in boiling water, like rice or quinoa -watch this space... 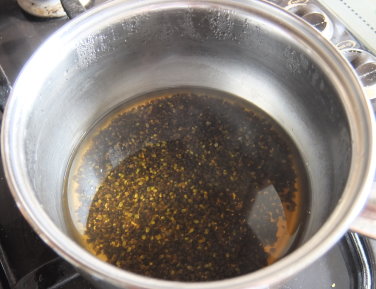 I picked some more seeds and tried boiling them for 20 minutes in plain water.

The water turned dark green-brown and the smell was very similar to that of boiled rice. 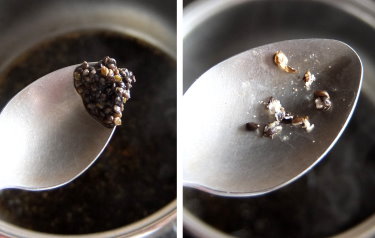 I tasted a few grains - although they were plump and easily chewed, they were still tough and gritty-feeling on the teeth. It's the seed coat that is the problem - it's just very tough and fibrous.

Crushing a few of the grains between two spoons, it was obvious that there is a starchy centre in there, so these things do have potential food value, but getting it out in palatable form will not be simple.

So I am going to stop there. If I pick this grain again, it will be for my pet gerbils, who love it (and are adept at cracking open tough seeds to get at the nutrients inside).

If large quantities of the grain were available, there are a number of ways in which it might be worthwhile processing them, including:

Grind and sieve - as for wheat flour. The grain could be finely ground, then filtered through a fine cloth or mesh, so as to separate out the starch grains.

Soak (or cook) and crush, then wash out the starch. Maybe it could even be malted to make beer - now that might be interesting, because it is guaranteed to be unusual.