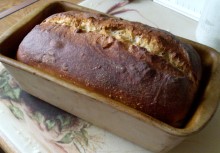 Another bready experiment - I was curious about how a loaf of bread would turn out if fruit juice was substituted for all of the water in the recipe. 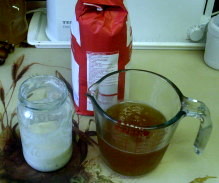 It's the simplest of bread recipes - just yeast (a live sourdough starter), a pound (450g) of flour and half a pint (280ml) of water - except it's not water - it's pure apple juice - frozen when freshly pressed (details here) and thawed out for use in this recipe. 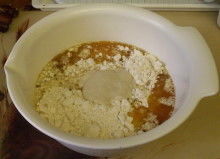 I set it aside and went out for the day - because the sourdough starter needs a good while to get working. 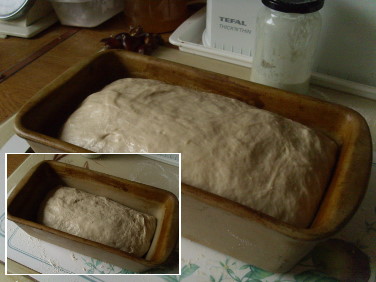 Because I left it in a fairly cool place, it took more than 24 hours to get to the point where it would double in bulk within an hour of kneading/knocking back.

So it wasn't until the next day that I put it in a stoneware loaf tin and left it to rise until level with the top.

Then I baked it in the oven at 190C for twenty minutes, with a metal tray of hot water on the floor of the oven to make steam. 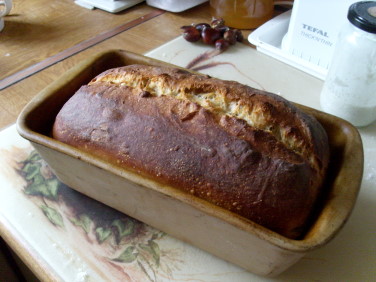 The result was a quite decent-looking loaf.

The split along the top was the result of a slash I made in the raw dough immediately before baking - it's supposed to allow the loaf to expand more as the crust bakes, but I've still to perfect this technique - the splits never quite seem to open up properly for me.

Still, there's nothing wrong with this bread.

I waited an hour for the bread to cool sufficiently to be cut, then I ate a couple of slices of it for my lunch, along with some fried slices of black pudding and some Hawthorn Sauce 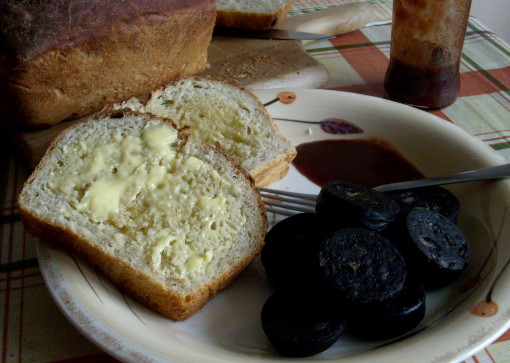 It was a light, springy, very moist loaf with a good, even texture. The flavour is sweet and pleasant, but only very vaguely apple-y - which surprised me quite a lot.

Black Pudding is a spicy kind of sausage (this sometimes confuses non-British people, who are expecting 'pudding' to be some specific kind of dessert).

It's traditionally sliced, fried and served as part of a Full English Breakfast.

It's made from - wait for it - pigs blood, oats, barley, pork fat and spices - this puts a lot of people off trying it, or even looking at it - they don't know what they're missing - it's really good

The flavour is rich, meaty and spicy, the texture is similar, I suppose, to a pate.

It's made from something that came from inside an animal - what's so weird about that?

I've already tried making bread using cider yeast (on the apple page linked just above) so I suppose this experiment is the flipside of that one.

I might try this one again, but add some raisins and other dried fruit - and bake it as small buns, or something...

mmm, Black Pudding and freshly baked bread, what could be nicer, apart from maybe a Speculoos and GnT

For a perfect split on top of the loaf you should use scissors, not a knife. That's how I learned it and I fully recommend itAlso, great site! I've spend way too much time here already and still have lots to read :-);