I've been watching a number of 'Red Hot Knife vs Something' videos that have been trending lately - and it struck me that they all seem a bit... wasteful.

Stuffed crust pizza normally only has a ring of stuffing around the edge - I wanted to take that a bit further - so I made this - the Stuffed-All-The-Crust Pizza. The Stuffed-est of crusts. 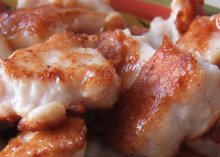