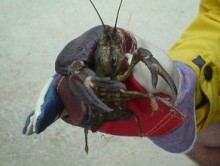 We found ourselves a suitable spot near a footbridge on Port Meadow and dropped our crab lines - baited with bacon - into the water. After only a couple of minutes, I had a bite! A magnificent specimen about 20cm long. 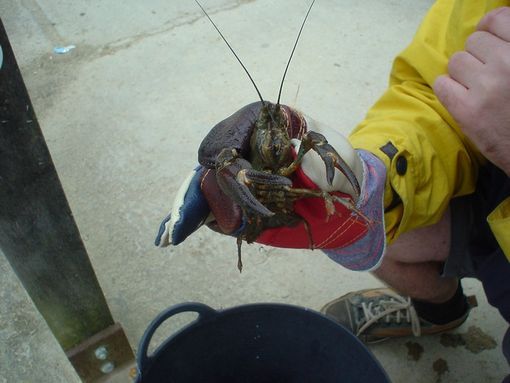 After an hour or so, the catch had risen to about a dozen, including one enormous beast - fully 25cm long and armed with fearsome pincers.

These claws are no joke - one snipped right through the metal hook on the crab line and another cut the brass wire standoff that separates the weight and the hook. I remember swimming in the Thames as a lad, but there's no way I'd put my toes down there now! 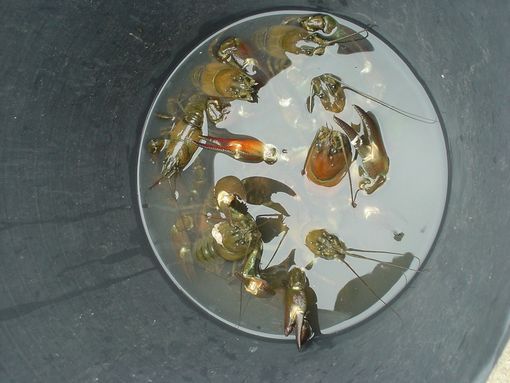 Another half an hour and things were slowing down, but we still managed to walk away with fourteen crayfish, including some of quite decent size. I put them in a cool box with some ice packs to calm them down for the journey home (they're pretty jumpy otherwise) 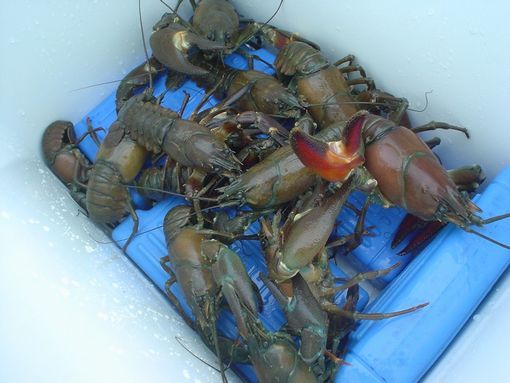 Back home, I kept them on ice and got a big pan of water on the boil - the ice stuns them and when they're plunged into rapidly boiling water, they're dead before they know it. Here's what the five largest specimens looked like cooked (5 mins on the boil, then plunged into ice cold water to stop them overcooking): 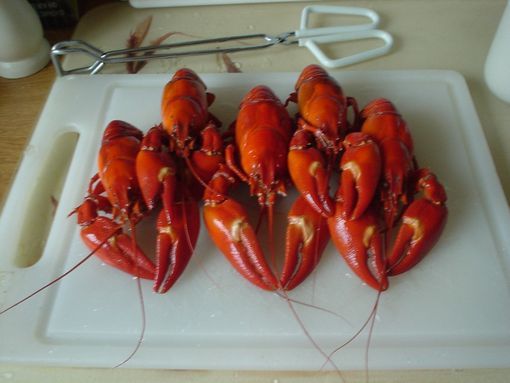 Shelling them was hard work - in principle similar to peeling prawns, but they're armed with rows of needle-sharp spines in all of the places you need to grab them to pry open. Pliers, nutcrackers and other tools were necessary.

They yielded maybe six or seven ounces of meat in total - half of it coming out of the pincers.

I took special care to remove the 'sand vein'(which is a euphemism for 'hindgut and anus') that runs down the back of the tail meat. 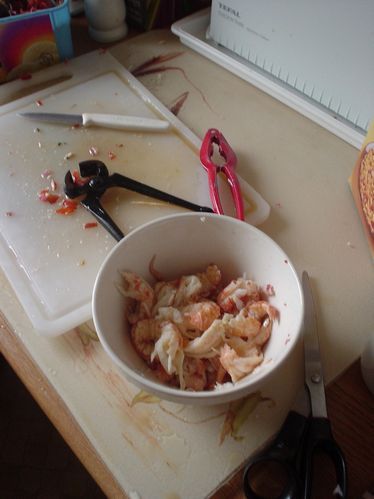 So I rustled up a quick dish of rice and vegetables,, mixed in the peeled crayfish and we ate it in front of the telly.

I've heard some people describe the taste of these freshwater crayfish as 'muddy' - I didn't find this to be the case at all - they have quite a delicate and pleasant taste - sweetish - mildly freshwater-fishy - the texture was good too - sort of like soft, succulent crabmeat. 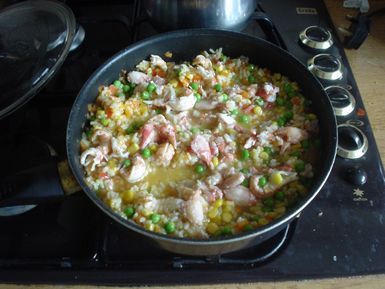 Oxford is too far from my home to make it worthwhile going there just for crayfish again, but nice for a day out picnicking or walking, just with something to show for it at the end of the day, so I think we'll be doing this again.

The Signal Crayfish hasn't yet spread to my part of the country (although it seems inevitable, since they're so resilient and invasive), so I took every precaution to ensure I'm not introducing them here - I strapped the box shut to bring them home - all of the water they've come into contact with here has been sterilised by boiling before pouring out in an earth soakaway, far away from any watercourses or ponds.

The law regarding catching and transporting of this invasive species has changed since this article was written - before you go catching these critters, I suggest checking the relevant rules and regulations carefully, to avoid trouble.