The time has come to launch the Snow Pea! Well, almost.

I'll be launching the Snow Pea on Saturday 11th August. Here's the plan:

In the event of foul weather, particularly if it is raining or threatening to rain, the maiden voyage downriver will be postponed to another near future date, although the launch itself may still happen if the conditions are moderate.

This is the (intended) destination - landfall is possible on the very tip of the spit, even at low tide.

The spit is accessible on foot by just heading south along the shore from Warsash Marina (where there is a car park), or by parking here, finding one of the footpaths through to the beach and heading northwest up the shore, but that's quite a long walk.

Also, there are numerous footpaths leading from Newtown Road, westwards to the shore, from where it is a short walk south to Warsash spit.

In the event that the Snow Pea sinks at launch, or is impossible to manoeuvre easily, explodes, is stolen by aliens, or if some other technical problem should arise, obviously that will force the cancellation of the maiden voyage until the problem is resolved.

Summary of the launch maiden voyage 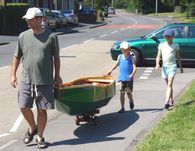 I strapped the boat to its trolley and wheeled it down to the river - the tide was at the approximate height I had predicted would be required, everything went pretty smoothly there.

Quite a few friends and relatives had turned out for the momentous occasion and the weather was warm, sunny and with a distinct lack of strong winds.

I donned safety gear and put the boat in the water, holding onto a rope secured to ne of the cleats, I pushed it out into the water and it floated upright perfectly. 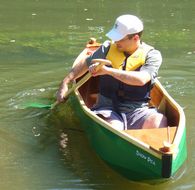 The next thing was to sit in the boat and have someone else push me out and pull me back, but that's where things went a bit adrift - I was very wobbly, so I asked for my paddle and I went on a short, unsteady circuit of the river below the slipway - this went fairly well, but I was conscious of the instability. 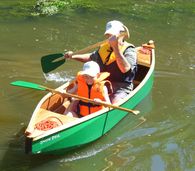 Next my son came on board, sitting in front of me and we went on another circuit of the area - this was more difficult and we returned to shore with him asking to get out.

Thinking it might just be a question of weight placement, I slid forward and got him to climb in behind me, but this was a disaster and we capsized in only a foot or two of water. -Unfortunately, I don't have any video footage of that part!

After that, I removed the decks and seat cushions and took a couple more circuits around the river section - the boat is easy to move, but has a tendency to turn under power - a double kayak paddle might have been easier to use, as I found myself switching hands a lot - the boat isn't long enough to use a J-stroke or stern rudder (although some of this could have been that the balance problems didn't permit me to try it properly).

But it was abundantly clear that there was no safe way even to make the first leg of the voyage down to Manor Farm - the river down there is very wide and is used by motor boats, so I think I'd have come a cropper long before reaching the pontoon jetty.

Well... it was.. interesting. Flotation and water-tightness is not a problem. Stability is a big issue - the Snow Pea is incredibly tippy - it appears partly because of the rounded bottom and partly because of the upsweep of the ends - there's almost too much buoyancy for a boat this shape, resulting in a very small footprint actually submerged. 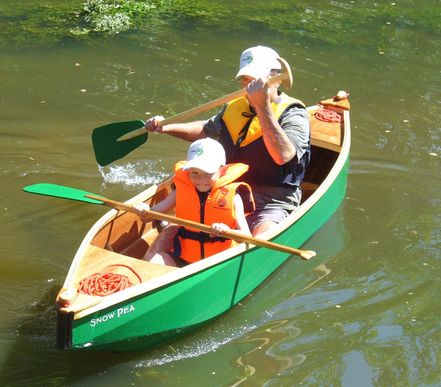 After a wobbly start, my balance did improve, but any rocking that started just didn't damp out. I thought a little more weight might have helped, so I invited my son on board - we wobbled a bit, then the boat tipped us out and filled up completely with water. 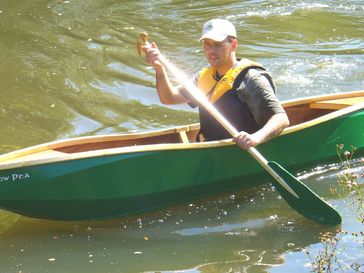 Removing the deck boards and sitting directly on the bottom of the hull made things a bit better, but it was still quite unstable and I think a wake from another boat would have capsized us if we'd tried to go down river.

So that's that. Not sure what to do next. Maybe ballast, maybe an outrigger, maybe a bonfire.

OK, here's why I think it went wrong - the underside of the hull is more or less round in profile - that means it can roll in the water without impedance (so it rolls like a ball in a socket) and without displacing any more water

-so there's nothing much to stop it from moving to a tipped state from an upright one, whereas with a dory hull, not only do the sharp chines 'catch' the on the water and impede rotation, but also, the hull displaces more water on the tipped side, resulting in upthrust right where it is needed in order to right the boat.

So, what can be done?

A variety of options are available, here are a few that spring to mind:

Give up, do something completely different:

I could just give up, chalk it up to experience, dispose of the boat or use it as a garden ornament, take up some other time consuming folly.

But... I think I've invested too much - both in terms of effort and emotion in the idea to give up completely

Scrap this boat, build another:

As above, but start again on building a different boat using a tried and tested set of plans (no disrespect intended to Hannu - it's my own modifications of his plans that have - literally - scuppered me here).

But... I'm not sure I'd have the stamina to see it through after what's happened here.

Several people have suggested this.

A couple of heavy sandbags in the void below the internal decks would make the boat sit lower in the water - this would mean that more than just the central, hemicyclindrical portion of the boat would be interacting with the water and it would place the centre of mass lower - perhaps below the waterline.

But... Ballast is a nuisance to lug about and it might not be altogether desirable to deliberately shove the boat lower - it might affect manoeuverability, or make forward motion more cumbersome. It also might just not be possible to gain enough effect this way.

Also, ballast becomes a potential danger in the event of the boat taking on water - the idea with small boats is to make them inherently floaty, not sinky.

The hull could be modified - it's probably possible to cut out the bottom two panels and replace them with a single flat panel, ending up wth a flat bottomed boat that might behave more like a dory.

But... It's a big job - it would necessitate stripping back all the paint and varnish around those seams, cutting a new section of ply, attempting to modify the boat's ribs in situ, more stitching and gluing - lots more work - probably not much less work than starting again from scratch. Maybe actually more work.

Build a streamlined, buoyant pod, construct some pylons to attach it to the gunwale - effectively converting the boat into an asymmetric catamaran.

No buts... I can't see any reason why this wouldn't work, And it actually seems like quite a straightforward idea.

I'm on holiday for a week soon, so I'll be thinking about this, and any other options that might arise. If nothing better comes along, I'll be setting to work on an outrigger. Should be possible to have this complete before the summer is out.

After the dust has settled...

OK, it's a week on from the launch now and I'm still pretty convinced that an outrigger is the best way forward. I did have a couple of new suggestions by email and elsewhere...:

Early on in the design/build, I talked about adding a small keel (called a skeg) - this would certainly help in getting the boat to track in a straight line - something of a problem with such a short craft, even shorter in the water - it would also help to damp out the rolling, but it would still be possible for a slow roll to occur - particularly if a crosswind is encountered.

I might still add some fins or a skeg if required though, but not primarily to solve the stability problems

Adding a keel loaded with significant weight would help with stability, but ballast could be a problem (see above) and I don't really like the idea of making the boat deeper and heavier anyway.

Build out the hull to a dory profile:

This one is quite a cunning idea - add sections of solid foam to the lower panels of the boat, to build out the outer hull into a flat-bottomed dory shape, then glass and resin over them to make them durable.
Something like this:

It's a brilliant idea, but I don't think I can implement it here - primarily because it adds buoyancy below the current waterline - this means the boat will ride higher up in the water and although the flat bottom will provide good initial stability, the top-heaviness might mean that sudden tipping is a possibility if the centre of mass moves outside the safe zones.

I'm also reluctant to do anything at this stage that would so radically alter the appearance of the boat's shape (even though that shape is in fact a problem).

So... onward, to commence construction of the outrigger...

Everybody present at the launch took the interesting failure in fairly good spirits and I remain determined not to let it get me down - I feel fairly confident that the next time the boat goes in the water - with an outrigger - it will be to the sound of cheers and possibly the pop of a Champagne cork.

The worst thing about it all is that in the flurry of confusion caused by the unanticipated instability, my bag was loaded on board, containing my mobile phone -which I had carefully wrapped in plastic bags, so it's OK - and my digital camera - which I hadn't anticipated taking at all, it was only in my bag because I put it there to carry to the launch, intending to give it to my wife.

Even after careful drying, the camera is quite dead. That's a nuisance not only because of the expense, but because I need a camera to document the remainder of the project. Oh well.