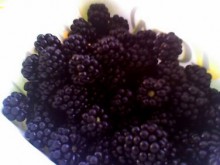 August 05 2007 - Autumn, or at least some aspects of it - has arrived early this year. We've had a miserably wet and cool summer, but despite (or perhaps because of) this, the blackberries are early, and they're excellent.

I went out for a short walk this evening - ostensibly to collect weeds for the guinea pigs, but I took an empty plastic container along on the offchance of finding some berries. I was not disappointed.

The place where I normally pick them - along a little footpath across the fields behind Botley Village - was not very good, but a little further on, I came across a large thicket of enormously rampant and vigorous brambles - perhaps 10 feet tall and with huge stems armed with wicked backward-pointing thorns. The fruit here was amazing - large, evenly-ripened berries of great quality - fully ripe and just starting to soften, but still completely sound.

I picked about half a pound - there was more to be had - or there would have been, had I not been wearing shorts - as it is, I did get a little scratched around the legs and arms, snagged once or twice on the shirt by the hooked prickles, and stung by the nettles growing up through the bush in places.

But it was worth it; here's what I returned home with: 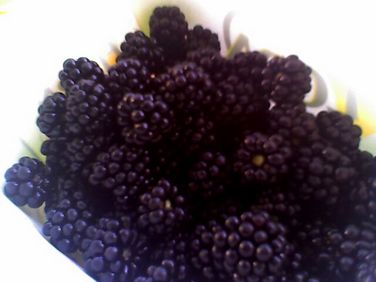 I wish I had my proper camera to show you what they really looked like (this one was taken on my phone) - but even then, you'd still be missing out on 90% of what blackberries are all about, which is the aroma.

Cultivated blackberries don't have it, at least not so much.

Wild blackberries have it - that intense fragrant fruity aroma that just can't adequately be described in words.

If you don't know what I'm talking about, just go and pick a cupful (or more!)of fresh, ripe wild blackberries on a sunny day, then stick your nose in the cup and inhale. The scratches, barbs and stings melt away into insignificance when you smell that smell.

There are a million different ways to prepare and serve blackberries - bramble jelly is a great way to take a bit of summer with you into the dark winter, blackberry pie or crumble is always a favourite and the deep maroon juice is great for making swirly patterns in your custard.

One way I like to serve them is to stew and sieve about a pound of them, then use the strained juice in place of lemon in a lemon meringue pie recipe - your guests will initially see it and say "oh, lemon meringue pie" (perhaps they were hoping for something a little different), but when you cut it and pull out a slice, the rich purple filling is revealed and it always goes down a treat.

But these specimens were so luscious that it would be doing them a disservice to cook them without at least eating a few fresh and raw.

OK, I did eat some on their own, but I also used them to turn ordinary Neopolitan ice cream (and a little evaporated milk) into something a bit special. 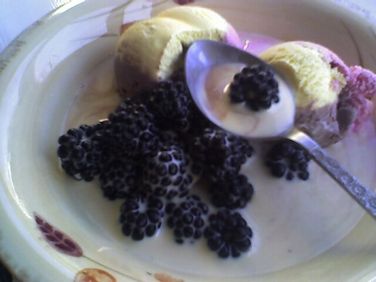 No, I don't wash them

I do not, and will not, wash blackberries;

if they're dirty enough to require it, they're not worth picking.

if they're suspected of being contaminated by pesticides or something, that's not going to significantly wash off by any means gentle enough to leave the fruit intact

-It destroys the aroma - some of the flavour of blackberries is right on the skin - you'll lose that if you wash them and the water will supress the evaporation of any aroma compounds that remain - no evaporation of aromas means you will smell nothing - Smell is a significant component of the sense of taste, so you will taste nothing.

-It turns them into disappointing little squashy blobs of mush.