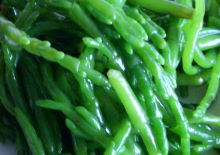 I took the family to Keyhaven with the intention of fishing for spider crabs off the rocks of Hurst Spit, but this plan was foiled by high winds - whipping up the solent into big swells and breakers - crabbing was definitely not on the cards.

Determined not to return home empty-handed, we went for a walk around Keyhaven harbour and out beside the salt marsh toward Lymington. There, we found Marsh Samphire in great abundance.

What is Marsh Samphire?

Salicornia spp - A genus of several very similar-looking species of succulent, jointed, upright plants - consisting of jointed, branched, leafless stems up to 8 inches or so in height - each plant resembling a Saguaro cactus, in miniature. 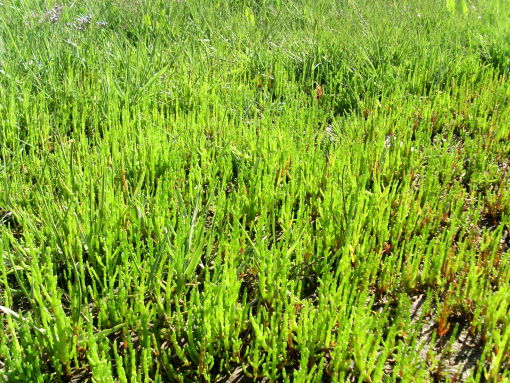 Found on salt marshes and mud flats, this plant is found mostly below the high water mark - so it is inundated at high tide.

Marsh Samphire takes its name from the superficially similar, but unrelated Rock Samphire - which grows on cliffs and banks near the shore - because this other plant is often found growing straight out of the rock, it was known as St Peter's Herb - Herb Saint-Pierre, and over time, this was corrupted to Herb Samphire.

Many people just pull up the whole plant - root and all - I prefer not to do this, for a couple of reasons; mainly because it makes a mess - putting the muddy root into your basket or bag just means more washing, trimming and sorting back at home, but also, leaving the root and the base of the plant in situ may allow it to recover and regrow - some species are perennial - but even the annual ones, if not cut right down, can probably regrow in the same season if a few of the bottom stem sections are left behind. 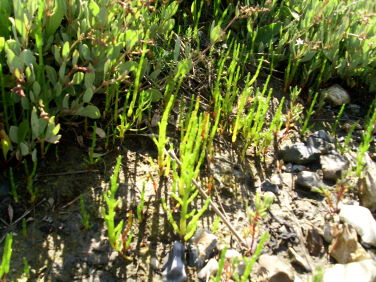 So for this reason, I prefer to cut it with a sharp knife - in places where it is found growing densely, a whole handful can be grasped and cut free - so it's not even particularly fiddly doing it this way.

Because of its favoured habitats - salt marshes - care should be taken when collecting Marsh Samphire - there is the potential hazard of finding yourself stuck in the mud, watching the tide return. Also, one should be careful not to disturb wildlife such as ground-nesting birds.

This has to be one of the easiest pickles ever - the samphire stems are washed and trimmed to remove any damaged or woody pieces, then simmered in salted water for just a couple of minutes, then packed into clean jars. 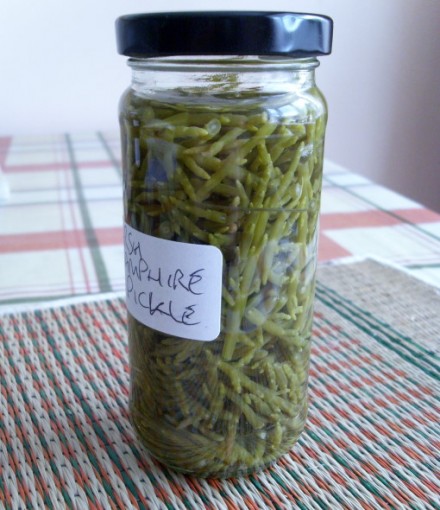 A spiced pickling mixture is poured over - consisting in this case of three parts spirit vinegar to one part water, boiled together with some pickling spices - a couple of juniper berries, some cloves, coriander seeds, peppercorns and allspice berries

I've been looking forward to this for months. 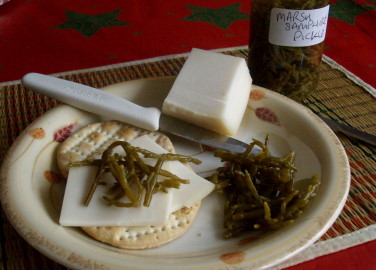 I tried some of the pickled samphire with some Tomme de Chèvre and Cornish Wafers. It's excellent.

As predicted, it's crisp and tangy - the overall effect is reminiscent of pickled gherkins (baby cucumbers), but there are subtle differences to the flavours - the samphire has a unique sweet, earthy, leafiness to the taste - quite difficult to pin down and describe, and well worth the wait. I'll make more than one jar next year...

The common name Poor Man's Asparagus perhaps does marsh samphire a disservice - sure, it's free to gather, and yes, it's comparable to asparagus in some ways, but it's not a poor substitute for anything - it's a first-rate wild vegetable that's well worth eating.

The plant can be used to make an interesting pickle, but the most common way to serve it is simply boiled or steamed as a vegetable. 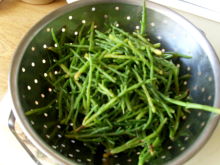 After washing, trimming off a few brown bits and picking out a few pieces of other accidentally - gathered plants, I plunged my samphire into a pan of boiling water. It doesn't take very long to cook - only a couple of minutes and it's done - it will turn a deep, brilliant green and it should be drained and served at this stage - before it starts to lose its fresh colour and crisp texture. 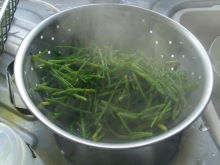 Served with just a little butter, it's an excellent vegetable - the smaller specimens can just be eaten whole like green beans. The larger ones will be found to have a tough fibrous skeleton - and these are eaten by grasping the base of the plant and stripping off the crisp flesh by pulling it through your teeth.

The flavour is mild, but pleasant - distinctly salty, with a fresh, tasty marine tang. It tastes really superb dressed in a little sprinkle of vinegar and a grind of black pepper.

This is a first-class wild vegetable. Well worthwhile.