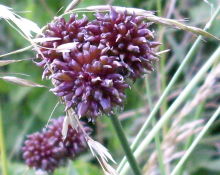 While we were out walking at Keyhaven, I happened to notice large amounts of Crow Garlic

What is Crow Garlic?

Allium Vineale - related to onions, garlic, leeks and of course, Ramsons, this plant is common in grassy places such as roadsides and field edges, as well as banks and dunes near the sea, generally favouring sunny locations, usually on fairly light, free-draining or sandy soil.

I have been unable to find any definitive source or reasoning for the word Crow in the common name, however, it may be a corruption of the first syllable of klobalouh, which is the Old High German word for garlic.

The leaves are slender and tubular - like chives, for which they are often mistaken - the difference being that Crow Garlic leaves are slightly corrugated and more of a greyish-green colour than chives. 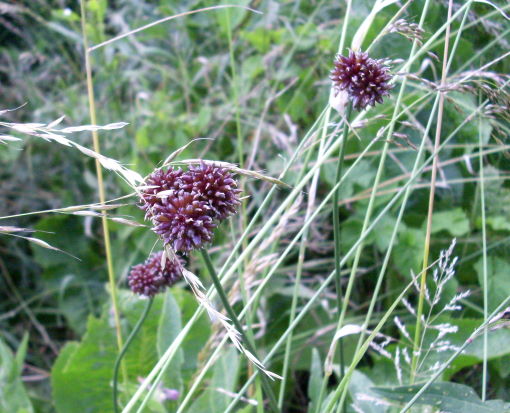 One rather odd thing about this plant is that some local varieties produce no flowers or seeds at all, but in their place, form a tight cluster of maroon coloured (later fading to straw colour) miniature bulbs - called aerial bulbils - as depicted above. In fact, this isn't an uncommon phenomenon in the genus Allium, or indeed in the whole of the lily family, to which they belong.

It is not unusual for the aerial bulbils to sprout and begin growing slender shoots while still attached to the parent plant (see the photo further down for an example of this).

Because it grows amongst tall grass, the plant is easily overlooked, although the seed (or bulb) heads are carried on tall, stiff, wiry stems - as seen here, growing on a bank next to the Hurst ferry at Keyhaven. 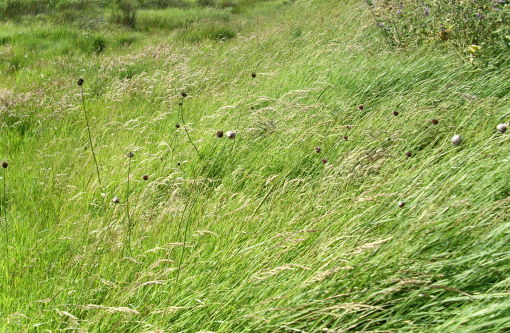 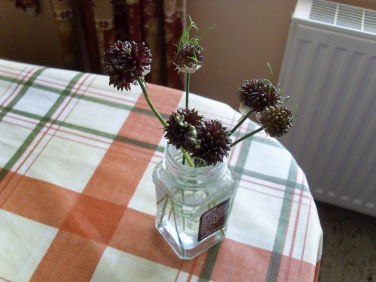 The plant has a distinctive onion/garlic smell - all parts may be eaten.

The early leaves are soft and can be picked by hand, but the flower/bulb stems are tough and fibrous - and are best cut with scissors or a knife, rather than pulled off - as pulling may uproot the bulb, or break apart the cluster of bulbils.

Cut stems, along with their bulbil clusters can be stored for weeks standing in a glass or vase with a little water - ready to use a little here and there as you need them.

The chive-like leaves of this plant appear very early in the season - pretty much from midwinter onwards - so it's a useful resource when not a lot of other things are available.

The cluster of wheatgrain-sized bulbils that appear in place of flowers breaks apart easily and has a good, rich, sweet onion flavour - I can imagine this working very well as the basis of a pickle (if enough can be collected).

I decided to mix some of the bulbils into a loaf of bread. 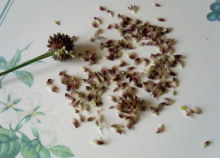 So I started with the bulbils from two or three heads - probably about a heaped teaspoonful in total. 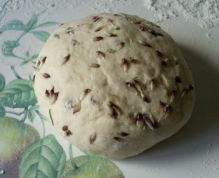 I made up just a small batch of plain white bread dough - one quarter of my basic bread dough recipe. I kneaded the bulbils into this, then stuck a few more on the outside (the ones on the outside turned out to be a mistake, as I'll explain further down...

I left the dough to prove, then slashed a cross in the top and baked it. 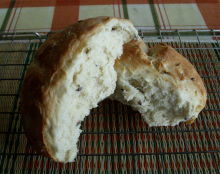 The loaf came out well - except that the bulbils on the outside became toasted and burnt - and as a result were very bitter to taste. Fortunately, though, they could just be brushed off.

The bread itself was great - the tiny oniony bulbs hadn't infused their flavour completely into the bread, but little pockets of sweet onion/garlic burst upon the tongue as it was chewed - actually, quite a pleasant experience.

So all in all, it's a great little wild plant, packing loads of flavour into a tiny space. There must be a hundred other uses for the little bulbils, as well as the leaves earlier in the season.

Growing up, we had some 'walking' onions. They grew little onion clusters at the top, which would fall over when they became too heavy for the stems to support. These would root and grow new stems, topped by new clusters. (So they would 'walk' around t

Definitely - all of those little rose-coloured bulbils eventually crumble off the stalk and grow into new plants.