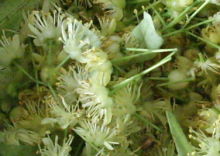 Apparently this property was exploited commercially and bars of 'Linden Chocolate' were, for a while at least, commercially available.

I collected some ripe Lime fruits in fully-dried state (right) and some that were ripe, but still moist (left). The Lime flowers (centre) were dried earlier this year - in the summer. 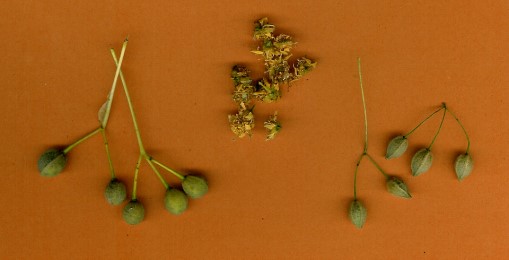 The big problem here is distinct lack of information. All I know is that the fruits and flowers are ground up together - I don't know what other preparation may be necessary (such as roasting, perhaps).

I also don't have the equipment to finely grind things, so I'll have to improvise...

I took a dried lime fruit and a couple of dried flowers and chewed them very thoroughly, attempting to crush and grind them as finely as possible between my molars. This also enabled me to taste the resulting mixture.

The sensation is very similar, in terms of both taste and texture, to chewing a wooden pencil. Does not resemble chocolate even slightly.

As Experiment One, but using a ripe, moist Lime fruit.

The experiments failed to yield anything that could, even under the most charitable of definitions, be said to resemble chocolate. The bitterness of the undried fruits might become palatable when mixed with sugar, but it's still nothing like the complex bitterness of cocoa.

Unless further information arises clarifying the proper method of manufacture, I fear little progress can be made here.

Well, I did some more research on this and according to the available information, the bitterness I experienced in the lime fruits last year was due to me waiting too long - they're supposed to be consumed under-ripe

OK, so since the middle of this summer, I have been testing the fruits of a nearby lime tree - every time I walked past it (several times a week), I pulled off a fruit and chewed it

When under-ripe, the fruits are astringent, while ripening, they are bland and pulpy and later on, they start to turn dry and bitter

I first came across the idea in Roger Phillips' book - Wild Food - where it is stated that a French chemist named Missa discovered that grinding the flowers and fruits together resulted in a substance resembling chocolate in flavour and aroma.

Various references exist on the internet supporting this notion - including one here that seems to speak very positively about the stuff.

I don't know what they're doing right that I did wrong, but their casual mention of half a kilo of lime fruits makes me wonder if they have even tried making it - the fruits are tiny and it would take a great deal of effort to collect that quantity.