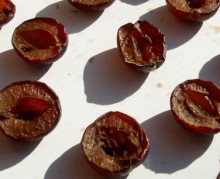 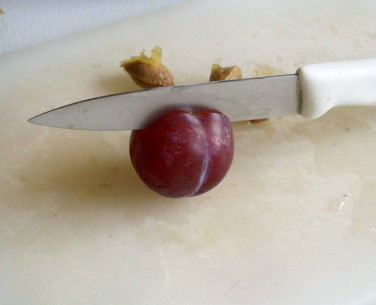 I started with a dozen of my wild plums - I know it's going to be difficult drying them in the typical British summer climate, so I'm not even going to attempt leaving them whole - they'll dry much quicker if they're halved and stoned - the exposed flesh will release its moisture faster than the intact skin of a whole plum.

I experimented a bit with cutting and stoning them and found that cutting at right angles to the cleft on the fruit is the way to go - cutting in line with it leaves the flesh attached to the stone and the skin comes away empty. 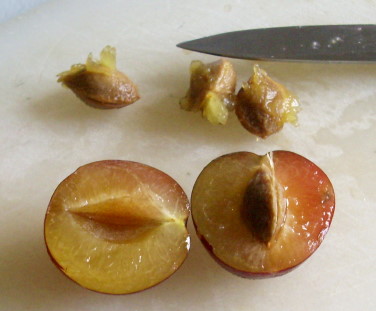 By slicing against the cleft, then setting aside for a minute or so, then gently twisting, I was able to get the fruit to separate fairly cleanly from the stone - requiring only a little bit of teasing with the point of a knife to remove it from the other half.

I could dry them in the oven or by some other artificially accelerated method, but I want to do it as simply as possible - sun-drying. 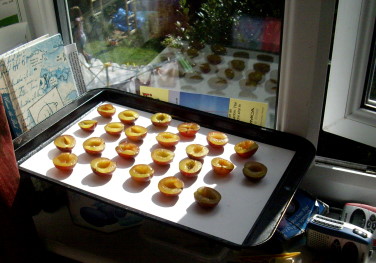 This technique worked fairly well for making fruit leather from crab apples, so it ought to work for prunes.

The stoned, halved plums were laid out, cut-side-up on a piece of clean plastic sheet on a tray and this was placed in a sunny spot next to an open window (not essential, but a gentle breeze greatly speeds drying times). 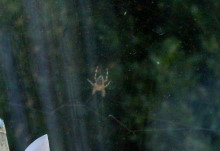 A friendly spider living on a web strung right across the outside of the window helps to prevent flies entering and landing on the fruit. 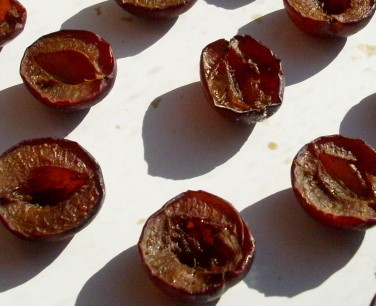 The tray was moved to another window ledge as the sun moved around.

At the end of day 1, the plums were noticeably shrunken. 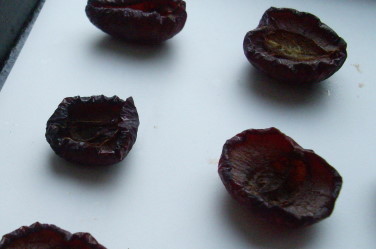 By the end of day 2, they're really drying quite well - a couple more days of sunshine and they'll be ready, I reckon.

I did lose one to mould - for some reason, just one half of one plum developed white spots on it and had to be discarded - the rest are OK, as far as I can see. 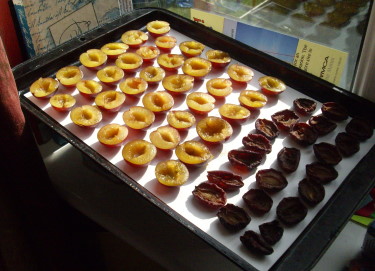 Once they're past a certain point, they seem to keep on drying even out of the sunlight - at the start of day 3, they'd shrunk considerably overnight, even though it was quite cool.

We found another group of plum trees while out walking near Hamble village, so I decided to start another batch, so here they are alongside the first lot. 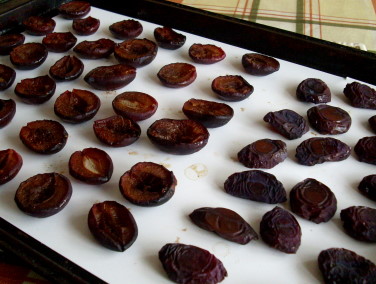 End of day 4 - the prunes from the first batch are now very dry and shrivelled, but still quite soft - the second batch is about halfway there.

I tasted one of the drier specimens - they're good, but really quite sour. I think I'll preserve them in an alcoholic syrup or make them into a chutney. 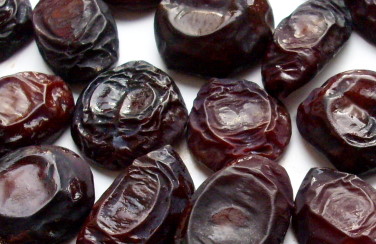 Day 6 - they're all done - the second batch must have had a higher sugar content than the first, as they ended up slightly more plump and were less sour to taste, They're proper prunes - and I think with a little further drying they would keep well for winter use. I'm surprised at how easy this was. 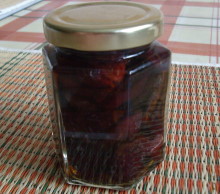 I wanted to turn my prunes into something a bit special - so I packed them into a jar, added a couple of heaped teaspoons of sugar and topped it up with brandy. I'll keep them for use around Christmas sometime, I think.

Fascinating to ponder that this little jar of prunes - that fits easily in my hand - was made from quite a sizeable bowl of fresh fruit. 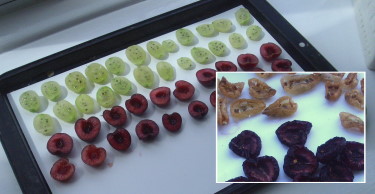 Plums aren't the only fruit that can be dried using this method - I've had similar success with cherries and gooseberries - I'm pretty sure tomatoes would also work..

Other Uses For Wild Plums

My wife found a great recipe for plum sauce - she made a couple of pints of this and we froze it in cup-sized portions - taking one out of the freezer today to thaw and serve with some roast turkey (excellent combination), I noticed that the sauce is a pretty tasty, tangy sorbet if eaten straight from frozen.

The sauce is made by taking a pound of plums (stones removed) with 6 tablespoons of brown sugar and a couple of tablespoons of water and stewing gently until tender, then blending with a slug of sherry and 4 tablespoons of redcurrant jelly (we had none, so we used seedless raspberry jam). 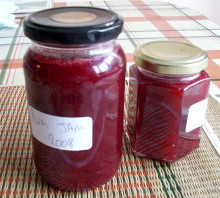 Bit of an obvious one this, but wild plums make a fantastic jam that sets easily, spreads smoothly and has a lovely sweet-sour taste that is just brilliant on toast, crumpets or scones

It's easy to make too - I cut about 500g of plums in half (just to check them for foreign bodies) and put them in a pan with a tiny splash of water to stop them burning. The fruit was gently stewed until it broke down completely, then the stones were removed by passing the mixture through a coarse colander.

The sieved pulp was then returned to the pan with about 75g of sugar to every 100g fruit and simmered until the sugar dissolved, then boiled for about five minutes before pouring into sterilised jars. 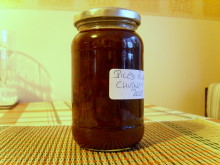 Almost the same method as for the jam - the plums were cut coarsely, then stewed and sieved through a colander to remove the stones.

The pulp was returned to the pan with a couple of onions, finely chopped, about 50g of brown sugar to every 100g of fruit, about half a cup of white vinegar, plus some ground allspice, nutmeg and a touch of cayenne pepper (all to taste) - simmered for about 45 minutes until thick and poured into clean jars.

Ideally, the chutney should be left for a few months to mellow, but jam and chutney-making always ends up making a few whole jars plus a little bit - and I tasted the little bit - on its own, with some strong cheese on a cracker - and in a sandwich with some ham - it's really good - smooth enough to spread easily - rich and spicy - sweet and sour. It will improve with age - I'm looking forward to it..