« Hawthorn - What To Do With Ten Gallons Of Apple Juice » 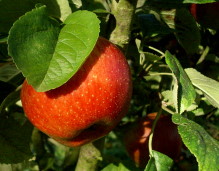 I spent a day helping out in a friend's orchard, lugging crates of apples from the field into the store.

His name is Steve and together with his wife, Julia, they run Fruitwise Heritage Apples 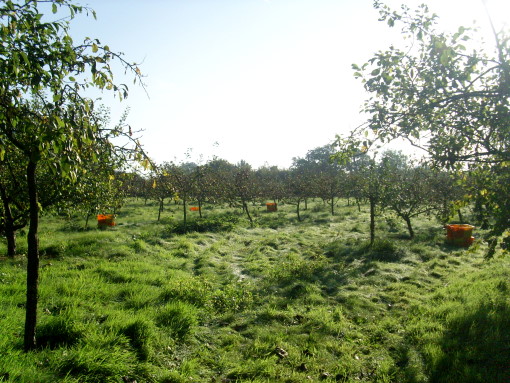 More About The Orchard

There's something about this orchard and its owners that rings true with me. Perhaps it's the quietly fierce rebellion against the bland uniformity of mass commerce, perhaps it's the respectful grasp of heritage and culture, or maybe it's more complex than that - a blend of many and subtle attributes, comprising a gestalt that can't really be explained, only appreciated and wondered at.

For a start, it's a lot about the apples. That might seem a statement of the obvious, it being an orchard, after all, but it's much more than simply an apple factory - it's more like an apple library or an apple sanctuary - the fruit here is cherished in that kind of way. 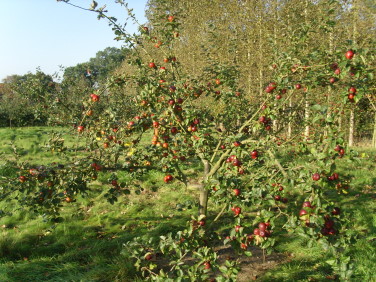 There's quite an astonishing range of heritage varieties here, including names such as Ribston Pippin, Laxton's Epicure, Egremont Russet, Ashmead's Kernel, Pitmaston Pineapple, Saint Edmund's Pippin and quite a few more, including a number of cider varieties.

This is not just another global commerce rant - the supermarkets do what they do significantly because we the public create paths of least resistance for them - they haven't got the time and patience to be dealing with this kind of stuff - crops of apples that aren't all the same size, or the exact same colour, or are not quite hard enough to survive machine sorting and transportation halfway around the world.
It's not their fault - an interior decorator wouldn't find it easy to paint the Mona Lisa, Supermarkets don't provide interesting quality unless it's just happens to be very convenient for them to do so.

But it's not a problem either - because there are already vendors out there that do care enough. There's simply no need to expect the big retailers to change.

In addition to producing apples for sale as whole fruit, Steve and Julia also press them for fresh juice - and it was my enormous privilege to take part in this year's very first pressing. Here's what happened: 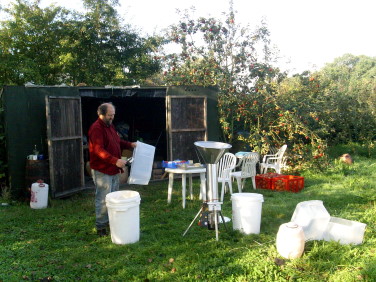 The first stage in the process is to clean the equipment - here's Steve scrubbing out some of the containers with sterilising solution.

This is important because the fresh, raw juice will be consumed in that state - it can be pasterised or otherwise preserved, but at the expense of some of the flavour and aroma. 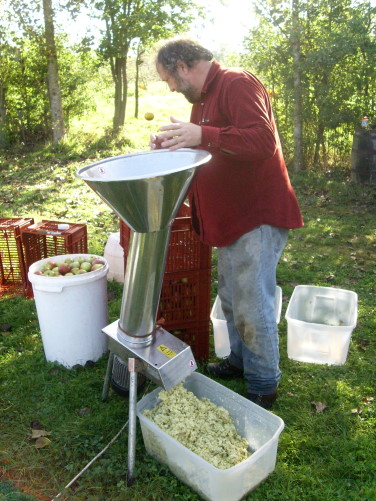 Next, the apples are washed to remove dirt and surface nasties, then passed through a mill - this one closely resembles my garden shredder - except that it's obviously built with greater regard for hygiene.

Steve has such close affinity with the apples that he is able to levitate them into the hopper by sheer force of will - as clearly demonstrated in this picture.

The apples are shredded to a uniform pulp - known as pomace, which is collected in large containers, ready for pressing. 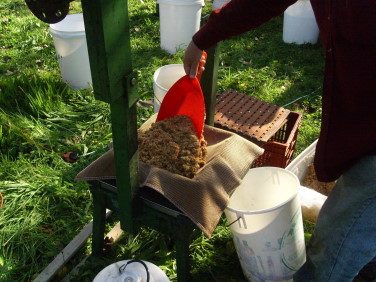 Next, the pomace is loaded onto a cloth draped over a square frame called a former - which sits on top of a wooden rack.

After spreading out evenly, the pomace is enclosed by folding in the corners of the cloth, placing another rack on top and repeating the process... 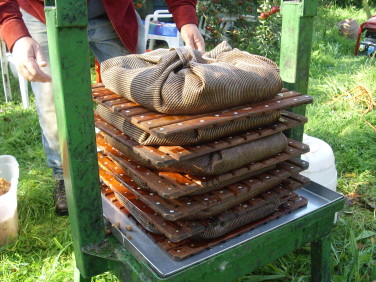 Eventually, a stack of filled cloths is constructed - this is called the cheese - and in this photo, it's ready for pressing. 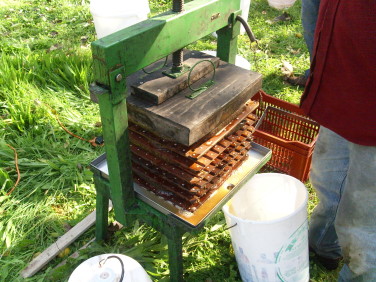 The cheese is topped with a heavy solid beech block, the top frame of the press is locked in place and the screw is tightened, compressing the stack - and the juice begins to flow.

The pomace has by now browned a bit, so the expressed juice is golden amber in colour - this is completely normal - it can be avoided by adding citric acid at various stages, but as this achieves nothing more than a cosmetic improvement, and nothing less than an unnatural adjustment to the flavour, its perhaps obviously omitted from our agenda. 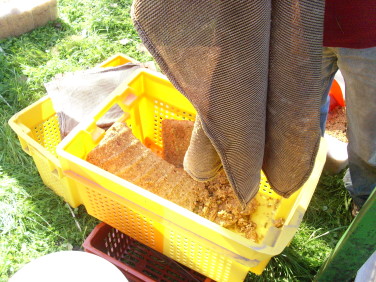 At the end of pressing, the spent pomace - somewhat resembling a carpet tile - is tipped out and will be composted back into the soil in the orchard. 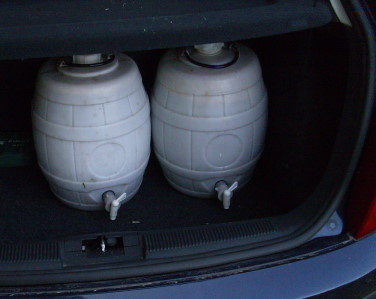 We'll take a closer look at the juice below - but here's the fruit (literally) of our labour.

Steve was kind enough to let me drive away with 10 gallons of fresh juice - the very first 10 gallons produced this year.

So... what can be done with 10 gallons of freshly-pressed apple juice? Take a look over here for a few ideas. 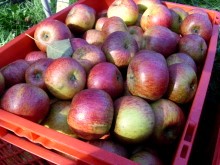 A box of Lord Lambourne apples sits ready to go to market:

- many of the varieties grown here are intended to be stored a while before being ready to eat - they're ripe when picked, but storage allows them to develop their full flavour, texture and aroma. 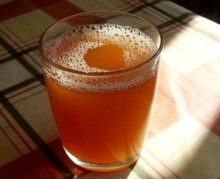 Here's a glass of the juice from the first pressing:

This is my first experience of tasting juice so freshly pressed - sure, I've had 'freshly pressed cloudy apple juice' in bottles from the chiller cabinet and I've had weird bitty juice from a small domestic juicer that was more like a smoothie (except for not actually being smooth), but this stuff is a bit of a revelation.

It's sweet, but also acid, it's smooth - almost thick, but still refreshing at just below room temperature. Most of all though, it tastes quite intensely of fantastic quality apples.

The full aroma of the individual apple varieties comes through in the taste - this pressing was a blend of approximately 40% each of Kidd's Orange Red and Egremont Russet, and about 20% Ashmead's Kernel

What To Do With 10 Gallons Of Juice

But obviously, ten gallons of the stuff is going to fill an awful lot of glasses - so I have other plans afoot - see here for details...