What To Do With Ten Gallons Of Apple Juice 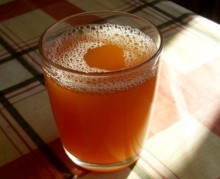 A friend gave me two large kegs of beautiful fresh-pressed apple juice - too much to drink, so here are some experiments in different ways to use it up.

As detailed on this page, a friend kindly gave me two five-gallon kegs of freshly-pressed apple juice.

The juice was pressed from a blend of three different varieties of dessert apple, as depicted below: 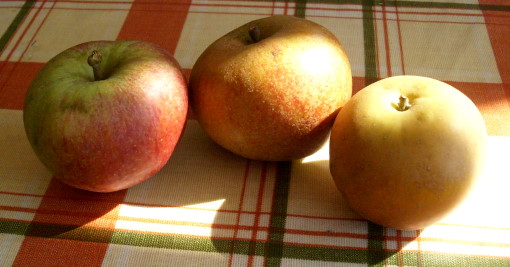 They are (from left to right):

But what can be done with ten gallons of the juice? 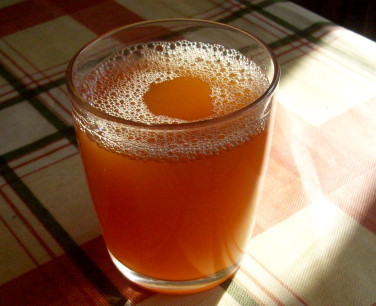 Obviously, it's possible to drink some of it - you could even say the stuff was designed for that purpose.

And it really was a treat - the natural browning of the apples during processing has yielded a beautiful translucent golden-amber coloured juice.

It's sweet and slightly syrupy, but refreshingly acid and the real apple aroma (thanks largely to the russet varieties in the mix) is just amazingly intense.

But ten gallons is too much to drink fresh, so what else can we do with it?

Reduce It To Syrup 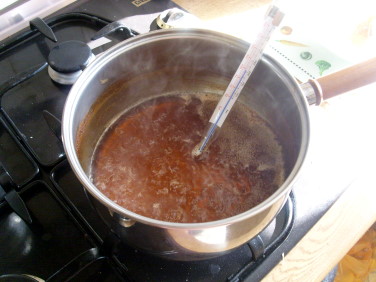 What remains is a clear, concentrated syrup - although sweetened only by the natural sugars from the apples, it's sweet enough to enjoy poured over ice cream or pancakes. 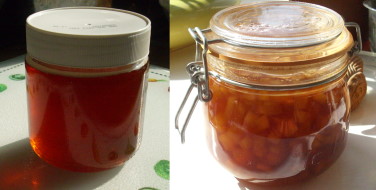 I made a second batch and a couple of minutes before the end of cooking, dropped in some finely diced fresh apple chunks (also from Steve's orchard). They are very lightly cooked and will remain preserved by the sugar and acidity of the syrup. 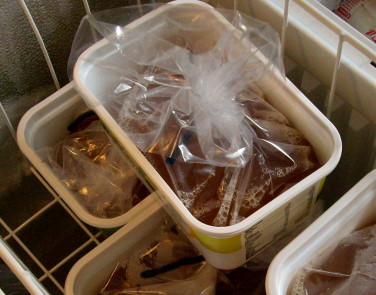 I don't have enough suitable bottles in which to freeze the juice, so I poured it into tough plastic bags - about a pint apiece, tied (leaving space for expansion as it freezes) and set in empty margarine tubs to form it into a rectangular brick

Once frozen, the bagged apple juice bricks can be removed from the tubs and stacked neatly in the bottom of the freezer, ready for future use.

I wonder if anyone has ever constructed an igloo from blocks of frozen fruit juice... hmmm...

The above treatments accounted for nearly five gallons of the juice, but there was still more than half left. What else?

Now, some disambiguation may be required here - to our friends across the Atlantic, 'Cider' may mean just freshly pressed, unprocessed juice, with the term 'Hard Cider' being reserved for the alcoholic product of fermenation of apple juice.

Not so here in England - the term 'Cider' here always means the alcoholic stuff - and that's what I'm going to try to make... 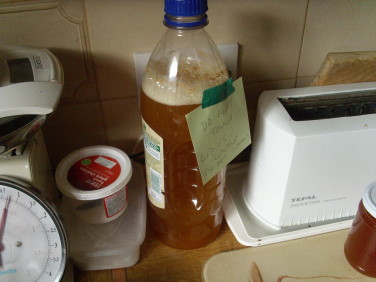 I'm mounting a two-pronged attack on this idea - the first part was to decant a couple of litres of the raw juice into a cleaned plastic bottle and just leave it with the lid half-screwed on.

Nothing is added - just the apple juice. The fermentation - quite well underway in this photo, is the sole responsibility of the abundant natural yeasts captured from the skins during pressing.

Fermentation in this case is progressing quite vigorously in my kitchen - a close examination reveals many small bubbles constantly rising in the fermenting liquid. 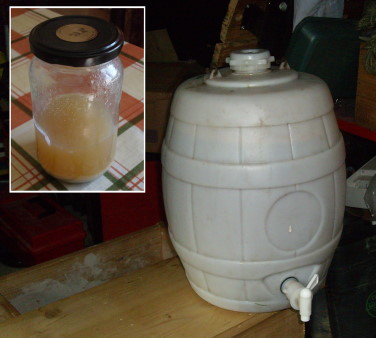 The other part is hopefully a slightly less hit-and-miss affair - the remaining 5 gallons of juice was kick-started by pouring in a yeast culture (inset) - started a couple of days previously by adding some wine yeast to a small quantity of boiled/cooled juice.

The fermentation here is taking place in a cooler environment - my unheated garage - which may take longer, but should result in a more complete transformation of sugar to alcohol. Time will tell...

I don't want anyone to get the wrong impression here - I'm not under any illusions of expertise in this craft, and I know there are a number of things I've done here that may raise the hackles of the purist:-

For a start, my apple juice is pressed from dessert fruit varieties - proper English cider is made mainly from cider fruits which are selected against different criteria than dessert varieties - they typically contain a fair amount of tannins. They're also usually left to fall off the tree and rest a while before pressing.

Furthermore, my starter culture was a wine yeast, not a specific cider yeast.

So my goal is not to produce world-class cider, it's just to end up with something that is not undrinkable. Perfection we can always shoot for next time, or the time after...

See further below more details of the cider-making progress.

Other Thoughts On The Juice

I can see quite a bit of potential in the apple syrup - in a heavy-cropping year such as this, the main problem seems to be dealing with the bounty before nature reclaims it.

But simmering it away for such a long time is neither energy efficient, nor is it exceptionally kind to the intense natural apple flavour.

What I want to try sometime is vacuum concentration - place a container of juice in a sealed chamber and reduce the pressure significantly and it will boil away at room temperature, but without caramelising the sugars or destroying so much of the delicate aroma (although I expect some aroma components would evaporate away, being volatile compounds).

However, that will entail getting hold of a vacuum chamber and pump - and that's not cheap kit. But maybe I can make my own...

I'n going to try using the apple juice in a bread recipe. See here for details. 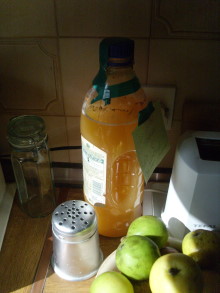 It's been about a week - the barrel in the garage has a foamy head on it and smells fairly pleasant.

The two litre natural yeast batch in the kitchen is further along, I think - the foam has gone from the top - it's still visibly bubbling, but the liquid level has dropped (all the CO2 that's been released had to come from somewhere), the foamy head is gone and it seems to be starting to clear a bit.

The small batch of cider in the kitchen has cleared significantly now - I siphoned it into another container temporarily, cleaned and sterilised the original bottle, then returned it to finish clearing.

It's difficult to siphon liquids without getting a mouthful - and I didn't try very hard to avoid it - so I got my first taste of the cider today. Considering that it's not finished, it's pretty good - dryish, clean-tasting and very discernably alcoholic.

The bottom of the bottle contained a layer of sediment - a lot of which is the yeast that has done its job, then dropped out of suspension.

As far as I'm concerned, this isn't a waste product, but a resource - I'm going to try to use it to make cider yeast bread

It's getting toward the middle of the third week of fermentation and I thought I would sample a bit of the big five gallon batch downstairs - the keg has a fitted tap that is set a little way off the bottom, so I was quite taken aback when a big spurt of yeasty sediment came out, but that must have just settled in the neck of the pipe - after that, the liquid that emerged was far clearer.

It's obviously not finished yet though - it's still quite cloudy, but I drew off half a glass and tasted it.

It's really rather good - it has a light, medium-dry cider taste that is very drinkable and pleasant and it is significantly alcoholic - I got that rosy-cheeked warm feeling after only one glass of the stuff.

Week Three And A Bit 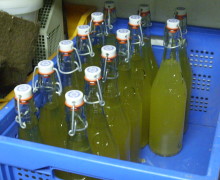 Mixed fortunes. The big batch downstairs seems to have finished - it hasn't completely cleared, but if I left it any longer, I think it would start to spoil, so I bottled it up.

Siphoning it out of the top of the cask revealed a clearer brew than I had drawn from the tap (even after running it first a little to clear it) - also, the fruity aroma of the russet apples was discernible this way.

So I have 14 bottles of cider in store, plus another one that picked up a bit of sediment and will be consumed today. 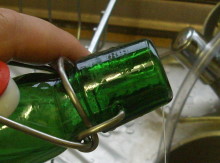 Sadly, however, the smaller batch fermenting on its own natural yeast indoors has failed - it went 'ropey' - a condition caused by bacterial growth - although technically safe to consume, the resulting cider is rendered undrinkable because it develops a glutinous, stringy, syrupy texture - a bit like bubble bath mixture.

The main batch is unaffected by this though - and although a little cloudy at present, is already showing signs of clearing - hopefully it will end up being a bit like a bottle-conditioned ale - clear, with a thin layer of sediment at the bottom of the bottle. 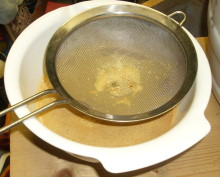 There was quite a thick layer of yeast sediment at the bottom of the keg - actually, the sediment layer means that it's impossible to siphon out all of the cider effectively - so a few pints were wasted, but never mind.

Anyway - this yeast - I collected it, planning to try to make my own yeast extract.

Probably best known in the form of Marmite or Vegemite, yeast extract is a byproduct of the brewing industry.

It is made by adding salt to a suspension of yeast sediment - this causes the yeast cells to break open and release their contents. The mixture is then heated, filtered, reduced and mixed with other flavourings before being bottled for sale.

I've had real trouble trying to find any quantitative data though - how much salt to how much yeast, how long to leave it, how hot to heat it and for how long. So I tried 50ml of yeast suspension with a rounded teaspoonful of salt, left to stand for two hours, then gently simmered.

It didn't work. There was no discernible change in composition and the salty yeast sludge just cooked into a sticky, smelly mess on the pan. Clearly more research is required here.