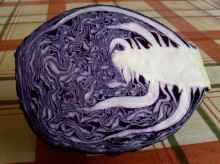 Red cabbage is more than just a vegetable to be enjoyed by adults and feared by children - it can be used as a tool for science... 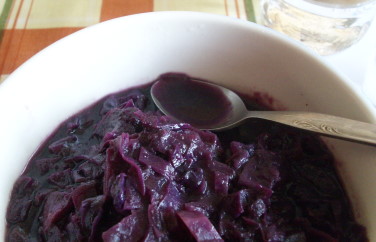 I cooked half of a red cabbage with some onion, apple and brown sugar and ate some with roast chicken and potatoes - that was really nice, but when I was washing up the plates, I noticed something interesting about the dark, staining purple juice. 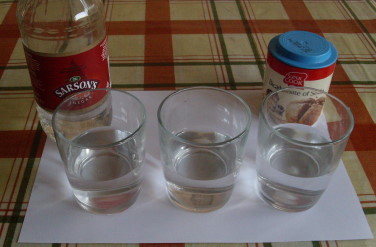 So I performed a little experiment - taking three glasses of tap water, I added about a teaspoon of vinegar to one, a teaspoon of sodium bicarbonate to another and left the third plain.

Then I added two teaspoons of the cooked cabbage juice to each glass and stirred. 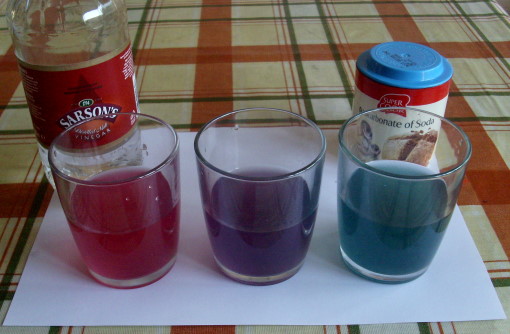 The dye compounds in red cabbage are called anthocyanins - similar chemicals occur in many other leaves, flowers and fruits, for example blackberries.

Vinegar is mildly acidic, bicarb a mildly alkaline - the anthocyanin in the juice responsible for colour are reacting with these two different chemicals in different ways.

Specifically, in the acid solution, it's reacting with hydrogen ions and in the alkaline solution, with hydroxide ions - each of these reactions results in a specific change to the anthocyanin that causes it to interact with light in a different way, thus appearing to change colour.

So red cabbage juice is an example of a pH indicator - it's possible to use it to determine the level of acidity or alkalinity in a solution - just like the rather better-known litmus paper, or universal indicator paper, which is more commonly used nowadays.

My childlike wonder at this phenomenon brought about comment from someone more knowledgeable, via stumbleupon:

Frannyy wrote: "Negative reviews really aren't my style save in some exceptional circumstances so I re-classified this by casting it in a positive light. Here is a simple method for playing with food and getting it to do some science for you. It is an easy and visually interesting experiment and I would say that it would be a fun thing to try with your kids, except of course if you have really inquisitive children who want to know exactly what is going on and you have a less than perfect understanding of conjugated carbon bonds. In that case it would be hell and I'd leave the showing off to someone else. Atomic Shrimp does a poor job in trying to clarify what is going on. Here is a more precise alternative to the something happens to the molecule explanation offered. Go to the Roses are Red Violets are Blue section. If you are really curious though you still need to swot-up on bond conjugation and orbital energy levels."

I accept this as fair criticism - although actually, probably my biggest mistake was to use the term 'science', when in fact, I meant 'fun'. 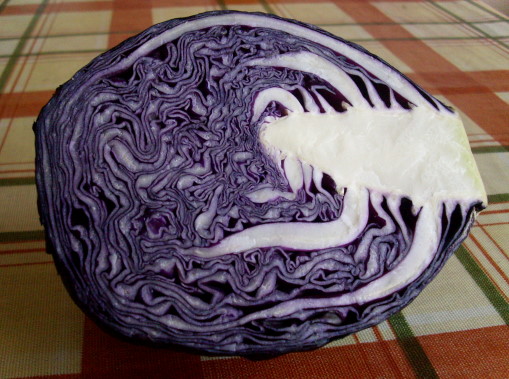 The dye compounds in red cabbage and in other vegetables and fruits do more than just make them look nice - they are believed to be beneficial to human health because they are antioxidants - which may make them useful in helping the body to combat disease, including cancer.

Studies are currently underway to determine their true effectiveness in this capacity.