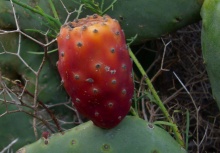 Easter 2009 - continuing my wild food foraging, away from home, I found some prickly pears...

What Are Prickly Pears? 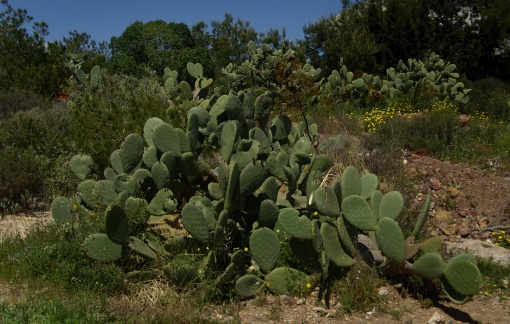 Opuntia spp - most commonly Opuntia ficus-indica - a group of large cacti with flat, thick, paddle-like leaves/stems - originating in the Americas, but widely cultivated in places with warm climates all over the world and now often found growing naturalised/wild.

I'll say more about the prickly aspects of this wild food in a moment - and the precautions that are absolutely necessary if you are to try eating it.

The plant produces ovoid or spherical fruits in a variety of sizes - in escaped cultivated varieties of O. ficus-indica, these may be up to 20cm long and 10cm in diameter.

Here in Spain, the main crop of fruit is produced in late summer into early winter - however, there are usually a few out-of-season fruits to be found on occasional plants at almost any time of the year - I found a few in reasonably good condition

You can't just wade in and pick them though - read further down for details... 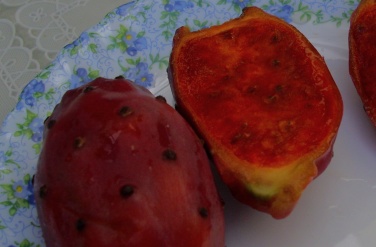 After careful preparation, the fruits I picked looked like this - a soft leathery capsule filled with sweetish juicy pulp, dotted with hard (but edible) seeds - if you don't mind swallowing them.

In some varieties, there may be a thickened fleshy outer layer, with a smaller, seed-filled pulp cavity in the middle, not unlike the arrangement in a melon.

The flavour is sweet and mild, comparable to a blend of fruit flavours possibly to include melon, banana and pear - the texture is a bit mealy, like a ripe pear - so the common name 'prickly pear' is reasonably apt.

They are quite pleasant to eat - not astonishingly tasty, but worth the effort if large, juicy specimens are available within easy reach, and if you have the necessary protective gear to pick and prepare them - did I mention? - they're prickly!

If the flavour and texture of the fruit deserves comparison to pears, the whole plant most certainly earns the title 'prickly' - much care is needed in picking and preparing these fruits. 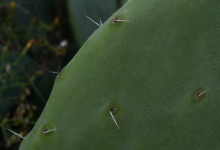 The whole plant (leaves/pads, buds, stems and fruit) is covered with little patches from which emerge two different types of 'prickles' - the obvious, vicious-looking, toothpick-sized spines (which may be absent altogether, as they were on the plants I saw), and many smaller, innocent-looking hair-like spines called glochids

It's these smaller spines that will catch you unawares - with the sligtest of touch, they lodge in your skin and detach from the plant - they may be invisibly small, but they are barbed and often, any attempt to pick them out simply causes them to become more deeply and painfully embedded. 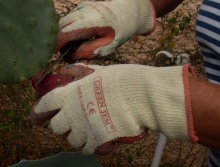 Wear stout, thornproof gloves to pick the fruit, detaching it from the plant with a sharp knife or scissors (if you pull, you may find that whole sections of the plant suddenly break free and fall or spring towards unprotected areas of skin!).

Don't over-reach for fruits way up on top of the plant or nested inside it - those little spines will get you if you just brush against any part of it. Losing your balance and falling into the plant would be disastrously injurious and painful 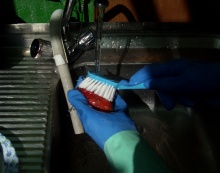 Before attempting to peel or eat the fruits, brush them thoroughly under running water, again, wearing thick, impermeable gloves.