Easter 2009 - continuing my wild food foraging, in Spain - here are a few more things I found, including some potentially edible things I passed over this time, for one reason or another... 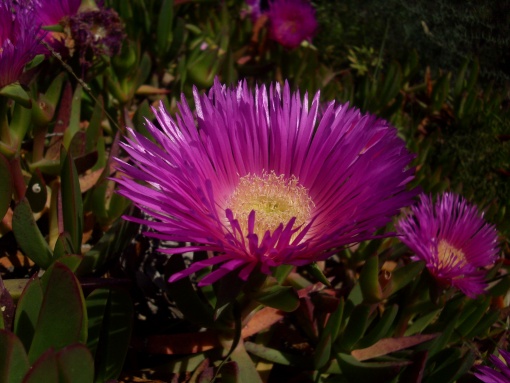 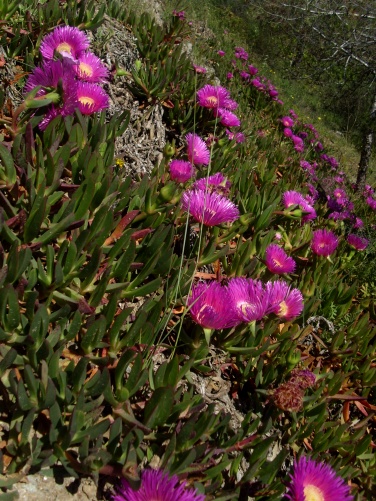 This succulent plant, with leaves that look like clusters of green French fries, is often found carpeting dry and rocky slopes, especially by the sea - predominantly in the Mediterranean region, but also as far north as Cornwall and Devon.

After the flowers fade, the seed capsule swells and becomes filled with sweet pulp and edible seeds.

As is probably evident from the photographs, it's a relative of the mesembryanthemums grown as border annuals in gardens.

I didn't eat it, because... it's too early in the season - there were no ripe fruits available at the time of my visit.

Cedric, The Rather Large Crab 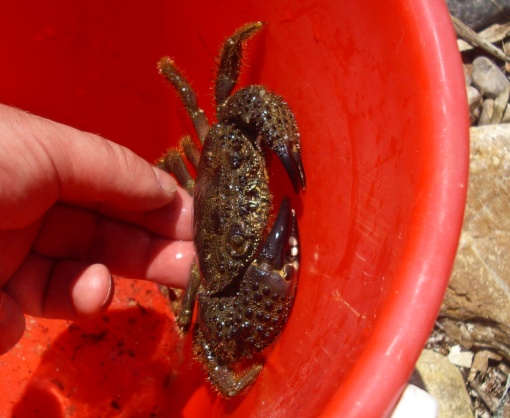 I caught this crab in a rockpool on a beach visit to a little rocky cove near Bolnuevo.

it's the biggest crab I've ever caught on shore and one of its claws was really quite fearsomely impressive - more so than the photograph really shows. I've certainly eaten smaller crustaceans than this and I'm sure there must have been a morsel or two of meat in there, but...

I didn't eat it, because... in all honesty, I felt a bit sorry for it.

Had I caught a whole bucketful of them, I might have felt more mercenary about them, but in any case, I didn't recognise the species* and I didn't want to kill it only to find that it wasn't good eating.

*I later identified Cedric as a member of the species Eriphia verrucosa - the Warty Crab - which is apparently conservation status: 'threatened' - so I'm kind of glad I let it go. 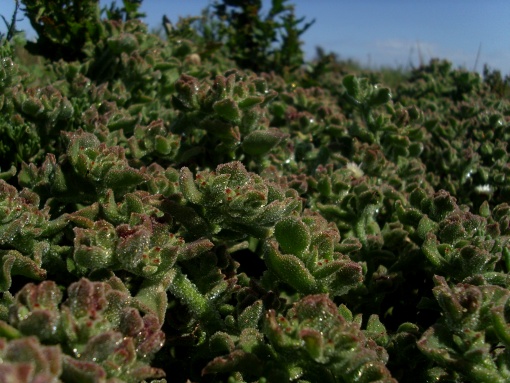 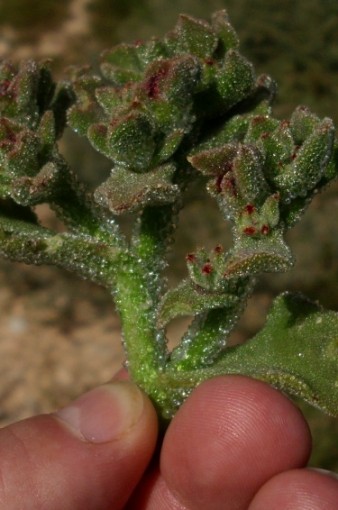 Mesembryanthemum crystallinum - a close relative of the plant at the top of the page - I found large clumps of this stuff growing on dry banks and waste places..

The leaves and stems are covered with little glistening transparent bladders that look like ice crystals - the whole plant feels cool and icy, even when picked in hot sun.

I DID eat it - and it's pretty good - the leaves are crisp with a slightly salty, slightly acidic tang - this would work well in salads and could probably be pickled like marsh samphire. 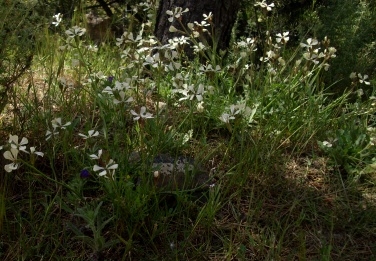 I DID eat it - it's considerably more peppery and aromatic than cultivated varieties, or the stuff you can buy in the supermarket - partly, I think, because these were mature, flowering plants, but probably also because of the harsh, arid growing conditions.

About 12cm in length, Leonard is one of many large locusts I've encountered on this trip.

I've been saying for a while now that 2009 is the year in which I will eat insects (as a meal, as opposed to accidentally, which everybody does).

My kids begged and cajoled me to eat Leonard, but...

I didn't eat it, because... Well, for one thing, I'm staying with my mother and she wouldn't let me use her cooking utensils for this - but also I don't really fancy cutting my insect-eating teeth on something that's too big for one bite. Leonard was set free.

A different kind of prickly pear - the fruits of a species of Cylindropuntia.

It's called 'Jumping Cactus' because the plant has a habit of shedding branches very easily and the spines are barbed so once they stick in, they stay - on brushing against it, it can seem as though the detached piece (now embedded in your clothing, or skin) has 'jumped' from the plant.

I didn't eat it, because... although there were lots of fruits on the plant, no ripe ones could be found - in fact, it looks as though maybe they were not going to ripen, because in many cases, the fruits had grown leaves and become just more pieces of stem.