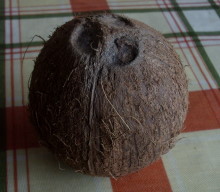 i decided to try to make a French Knitting bobbin... 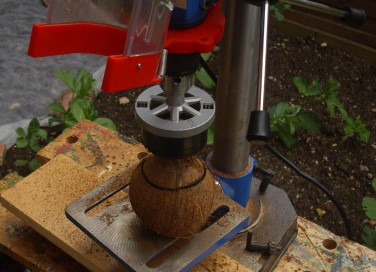 So I started by draining the water from an unopened coconut, then cutting out a circular hole in one end, using a holesaw in my drill press. 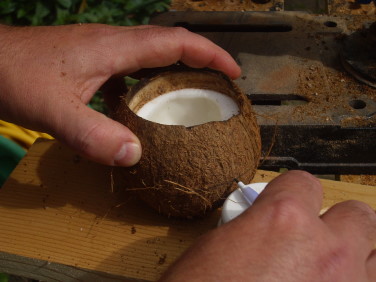 I cut a smaller hole in the opposite end

Then I marked a line around the equator of the shell - by holding a pencil at the right level, then rotating the nut against it on a flat surface. 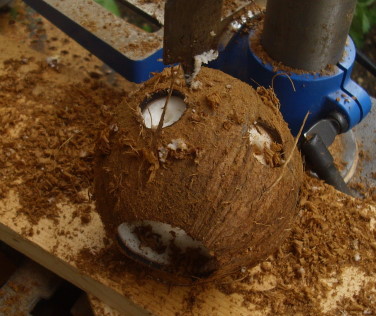 I marked some drill centres at evenly spaced intervals on the pencil line.

I drilled them out using a 20mm spade bit - this worked surprisingly well - leaving the nut flesh inside the shell completely controls breakout - so the holes cut really cleanly.

The diameter of my coconut meant that I could fit seven 20mm holes with approximately 20mm of space between them - obviously a larger one might accommodate more. 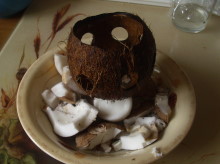 The flesh was then quite easy to remove - and most of it wasn't wasted - I trimmed off the bits that had been in contact with a tool and washed the rest ready for eating. 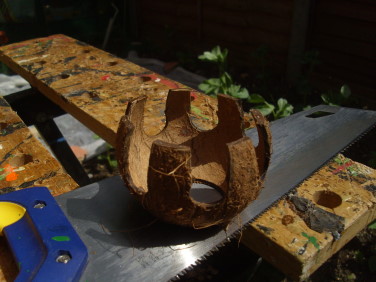 I trimmed down the top and cut vertically down into the sides of each hole - to create seven fingers (at this point, it's just about possible to see it as a French knitting bobbin...

All that remained was to trim up the rough edges, sand off the fibrous outside, polish and try it out. 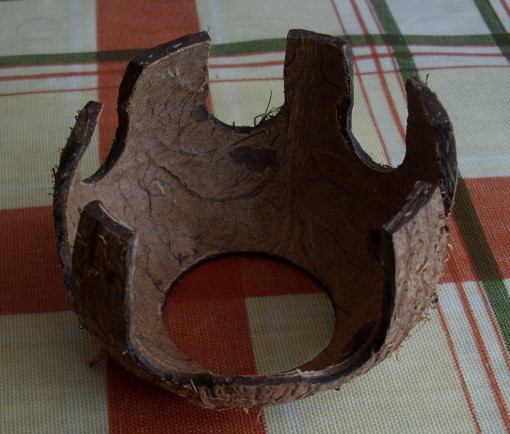 Unfortunately disaster struck at this point - one of the fingers snapped right off while I was filing away at the edges - I think there must have been some kind of flaw in the material of the shell there, because it broke under quite gentle pressure.

This was a fairly small coconut and the shell seems pretty thin - so that fact was against me from the start, but I haven't given up - I'm going to try again with a larger nut, and work from the 'eye' end, where the shell seems a bit thicker anyway... Watch this space for updates.

Coconut Shell - As A Craft Material 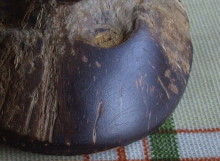 Despite this initial setback, coconut shell does seem like it has potential as a crafting material - it's reasonably hard, seems more or less grainless and (judging by the piece I tested, below) it looks like it ought to polish up nicely once all the fuzz is sanded away.

If you've got any ideas about things I could make from coconut shell, please feel free to drop me a line.

As suspected in the previous page, coconut shell really is quite a nice material to work with - it's tough, but easy to shape - and takes well to sanding - the dust doesn't clog the abrasive paper, which means that it sands very quickly to a smooth surface.

I'm thinking it might be possible - using custom-made drills - to cut a large number of slightly dished washer type pieces out of the shell, then stack, glue and clamp them all together, to make a solid rod of shell-stuff, which could perhaps then be turned to make chess pieces, knife handles or other small items.

More on that idea later, perhaps

Next experiment... is it possible to make anything that isn't constrained to the curved original shape of the coconut shell? Let's have a go... 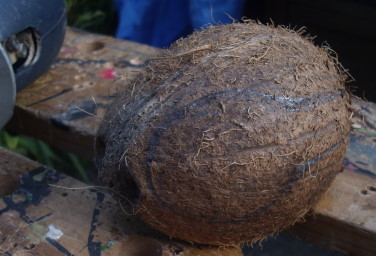 So, using another bit of coconut shell, I marked out my cutting lines.

Can you tell what it is yet? 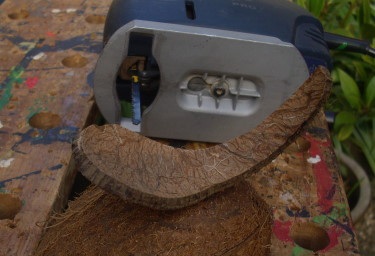 Look! - it's a spoon - except it's not a very useful one, because the handle curves upward instead of sticking out.

With many kinds of timber, it's possible to impart temporary pliability by steaming - coconut shell is a woody material, but is it sufficiently similar that it will yield to the same treatment? 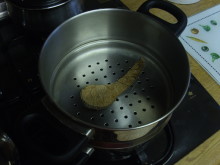 I steamed the piece over vigorously boiling water for an hour.

I had clamps and battens standing by. I removed the piece swiftly from the steamer and placed the handle part between the battens, then clamped it up - and... 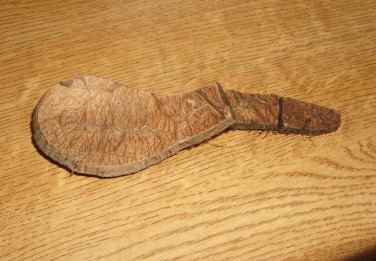 The steam did soften the shell material, and it did flatten a bit, but it was a crumbling sort of softness and the handle snapped in three places. No good.

Perhaps with hotter steam under pressure, it still might be possible, but I'm not sure - I think the similarity between wood and coconut shell might actually be quite superficial.

One more try - but this time, with a slightly simpler object... 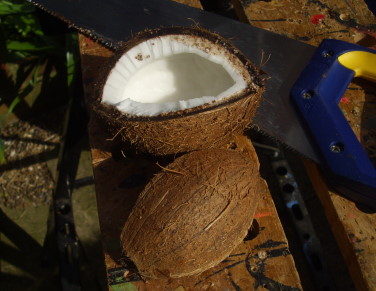 I started by sawing out one third of the shell - cutting along the natural shell joints.

It's quite easy for the thing to slip here, or for the saw to skip out and cut you - so extra care should be taken to clamp the nut (securely, but not so tight as to crack it) and to keep fingers out of the way.

Next, I took some coarse abrasive paper and sanded off most of the bristles from the outside surface of the shell - not to finish it, just to provide a surface that could be marked with a pencil. 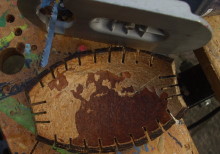 Using an electric jigsaw (scrollsaw) with a fine blade, I cut nine equally-spaced notches along each long side, then squared off the ends and cut three notches in each end. 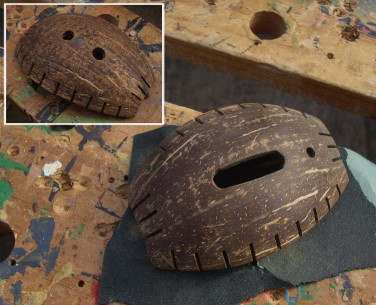 I sanded the shell to a smooth finish 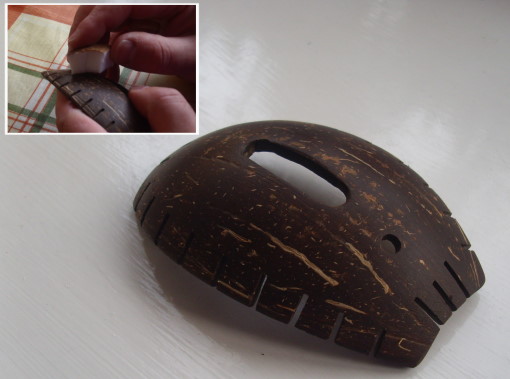 All went completely according to plan - I finished the sanded surface with coconut oil - by just rubbing a piece of the raw coconut flesh all over it, waiting for a while, then buffing with a soft cloth.