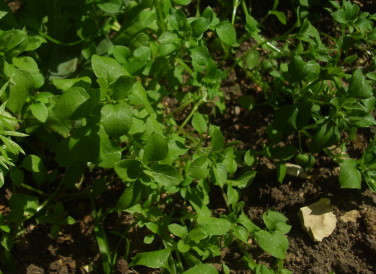 Stellaria media - A mat or clump-forming plant with growth up to about 20cm - the leaves are carried in opposing pairs on the stem and the plant bears tiny flowers with ten petals (actually, it's only five petals, but each one is almost completely divided in two).

The stems bear a narrow line of fine hairs up one side (and shifting sides at the stem joints) and the small oval seed pods are borne on elongated, drooping stalks.

Here's a closer view of some of those features - positive identification is quite important in this case, as there are a few other plants which - in the immature state - look superficially similar to chickweed, but you wouldn't want to eat them. 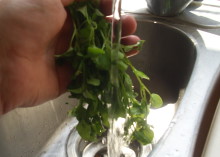 I just picked a small bunch of chickweed, washed it, stripped the leaves and tender parts of the stems (discarding the lower parts of the stems - as these are a little stringy and tough), I chopped it roughly, mixed with some finely sliced radish and tossed it in a little lemon juice, oil and black pepper. 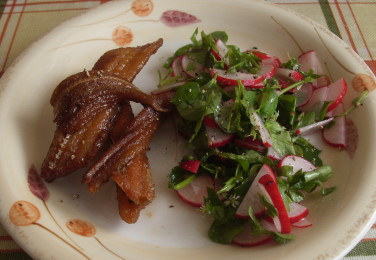 It has a pleasant earthy, nutty taste which combines well with the radishes, but would work equally well with cold potato salad, or just as part of a mixed green leaf salad.

In case you're wondering, the food I ate along with my chickweed and radish salad was braised eels (bought in a tin from the 'ethnic' section of the supermarket) - they were very tasty!

The description above should put you on the right trail, but if you've never identified or picked chickweed before, please look it up in some other sources and be certain you've got the right plant before you eat it.

One of the possible candidates for dangerous mix-ups is Sun Spurge (Euphorbia helioscopia) - it's only superficially similar, but it's often found growing in similar conditions - so care should be taken not to just grab bunches of what looks like chickweed - and end up picking spurge along with it.

Unlike chickweed, spurge bleeds a white (irritant, corrosive) latex when cut or crushed, and it lacks the small white flowers and hairy stalks that chickweed has.

The leaves are a different shape and arrangement too - in fact, there's no excuse to mistake one for the other, except carelessness - so be careful.

Pictured below is Sun Spurge - Don't eat it: 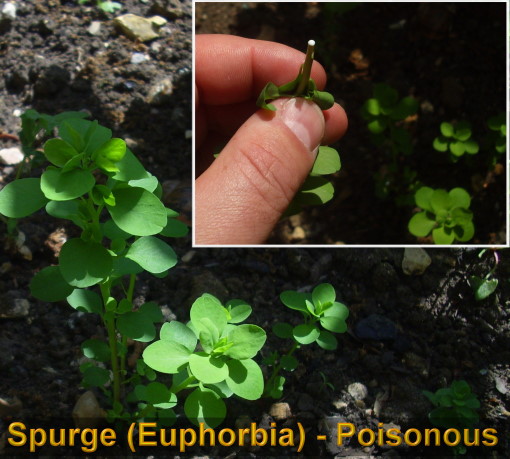