« Sewing A Button On A Custard Pie - Fruited Scones » 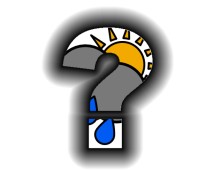 My reason for asking is this:

If I make any kind of prognostication about something supposed to happen 5 days hence, and I have unlimited opportunity to change my prediction, right up until the morning of the day, doesn't that grant me licence to say whatever I like now, knowing I can bother with the trifling business of being accurate when we get closer to zero hour and proper prediction is that much easier

So let's test the value of the 5 day forecast. What I intend to do is record the weather forecast for each day, as it progresses toward the present, through the 5-day forecast on the Met Office website.

I'll also be recording the actual weather outcome for the same local area.

As the data builds, we'll hopefully be able to see two things:

These are the various different weather types as defined by the Met Office - I've arranged them here into a sort of periodic table of weather - and it's this grid I'll use to score the forecasts on reliablility and accuracy.

Each day's forecast will be given a consistency penalty as follows:

Each day's forecast will be given an accuracy penalty as follows:

I'll be monitoring two geographical points - Portsmouth for weekday forecasts and Southampton for weekend ones (because that's work/home - so I can make the observations on the day).

Analysis
Well, this is a fine start - confirming my every suspicion so far - that is, the five-day forecast was completely useless - predicting heavy showers. Only the forecast on the morning of the actual day was correct - so the service provided by this forecast was approximately equivalent to that of an ordinary window.

Analysis
Again, not a particularly useful or precise forecast - changing every single day, then being wrong on the day.

Analysis
OK, not bad. Only one fairly small change, and a reasonably accurate and reliable forecast over all.

Analysis
Forecast changing every single day, but not by much - getting it right on the morning of the 17th and once on the 15th, but maybe more by chance than anything else.

Analysis
Reasonably consistent throughout the 5-day run up, but just never actually right.

Analysis
I suppose it had to happen sooner or later - the forecast from 5 days was right! - although it did get a bit shaky in between.

Analysis
Reasonably consistent, but just wrong - it rained, and this was completely unpredicted. That's possibly the most inconvenient kind of inaccuracy - I could have spent the last five days planning something that was reliant on dry weather.

I'm well aware of the dangers of drawing a firm conclusion based on small samples, but what sort of picture is painted the results above?

The first thing to note is that in this test, the actual daily weather was not particularly variable - less variable from day to day than some of the five day forecasts. Despite that, the general level of consistency and accuracy in the forecasts was pretty poor.

Maybe I should take another set of samples during a period of more changeable weather - perhaps in the autumn, but for now, my feeling is that my suspicions are beginning to have been confirmed - that 5-day weather forecasts are rather meaningless and useless, being likely to be superseded by different forecasts nearer the time.

FWIW, I used to report on the weather and its impact on crops for a major international wire service in the 80's and 90's. At the time, it was the policy of the National Weather Service here in the States that any forecast five days out was no more acc