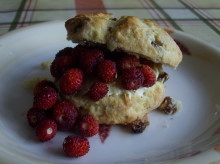 Here's a recipe for light and crumbly scones - the perfect centrepiece to a traditional Cream Tea. 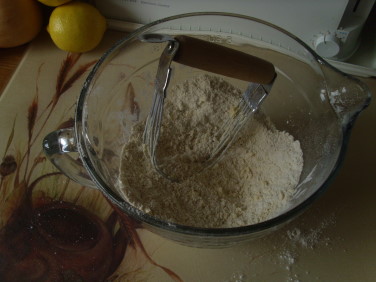 Place the flour, sugar and baking powder and a pinch of salt into a large bowl (if you can, sift the flour into the bowl, as it will make the end result lighter).

Cut the butter into small chunks and rub it into the flour with your fingertips (or use a rubbing in tool like this one), until the mixture resembles fine crumbs. 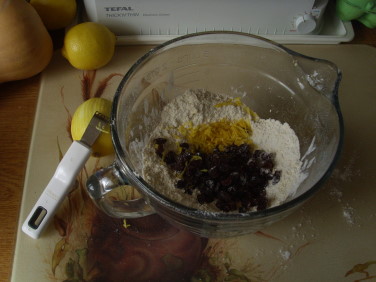 Add the raisins and the lemon zest, mix together.

Preheat the oven to 210 degrees C 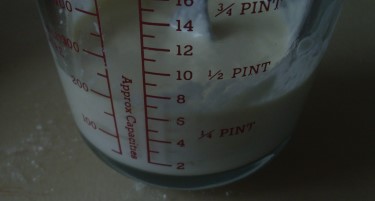 Beat the egg into the soured cream, add this to the other ingredients and fold it all together very gently with a table knife.

It's important not to mix too thoroughly - just gently bring the ingredients together. 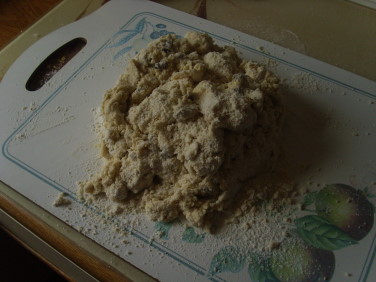 Turn the mixture out onto a floured surface - as you can see in this picture, it's still not even formed into a single ball of dough - and that's a good thing.

Squeeze the mixture together a little, but try not to knead it - we want the scones to be crumbly, not springy like a loaf of bread. 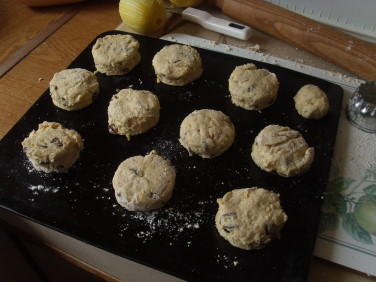 Roll the mixture out to about an inch thick, then cut into rounds using a small or medium pastry cutter or other suitable object (alternatively, just cut into squares with a sharp knife - it will taste just as good.

Place the scones on a lightly-oiled baking tray, brush the tops with a little milk, then place in the hot oven. 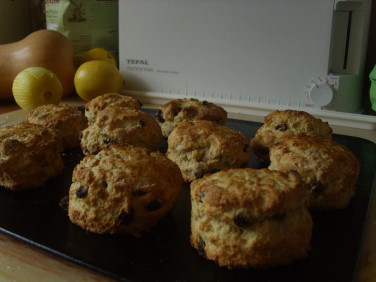 Bake for about seven minutes, but keep watch after about five - they overcook really easily. Remove the scones from the oven when they are golden brown.

Transfer them to a wire rack to cool.

Serve them split with butter or clotted cream and jam or fresh fruit.

I enjoyed mine with clotted cream, fresh strawberries and some gooseberries from my garden that are so ripe, they taste just like sweet grapes. 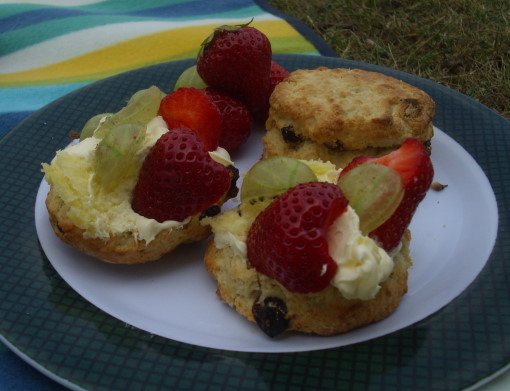 These scones are made to a traditional recipe - so I won't try to take the credit.

There is considerable controversy surrounding scones - firstly regarding pronunciation of the name - some say 'scone' to rhyme with 'own', others pronounce it to rhyme with 'gone'. Each group of course considers their diction to be the correct one.

There is also controversy over the proper construction of a Cream Tea. To the completely uninitiated, this is a light meal consisting of... well, all or some of: scones, butter, jam, whipped cream, clotted cream, fresh summer fruits, and tea

Some say the scone should be split and buttered, then spread with jam, then finished with a dollop of cream - others say the cream should be spread directly on the split scone, with the jam on top. Some say it should be raspberry jam, others say strawberry or blackberry, some insist on fresh fruit.

Wars have been fought on the basis of milder disagreements over less firmly-held positions than these. Can't we all just get along?

These scones can be made with other kinds of dried fruits - such as chopped apricots - or even yoghurt or chocolate-coated raisins. 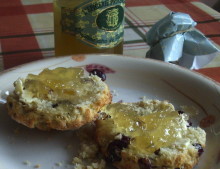 I made some more using dried sweetened cranberries and served them with an interesting watermelon and lemon preserve - lovely. 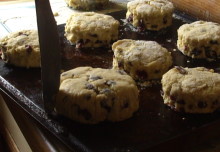 If you don't have a fluted scone cutter, just shape the dough into rough balls, flatten a bit with your palm, then knock shallow vertical ridges into the edge with a table knife.