Toad In The Hole

Toad in the hole is a classic English dish of sausages baked in batter - served with a rich onion gravy.

No amphibians were harmed in the making of this meal.

For the main dish

Make the batter first - ideally, an hour or more before everything else. Leaving it to rest before baking helps to ensure a light, puffy rise. 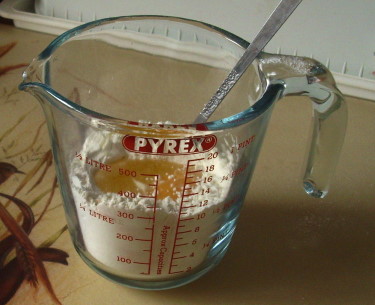 Put the flour and salt in a bowl or jug, make a little dip or hollow in the middle.

Add the egg and half the milk.

Beat with a fork to mix a little (no need to be too thorough at this stage). 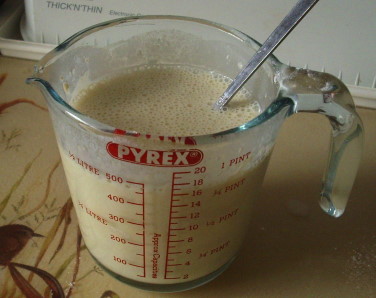 Add the rest of the milk and beat again until combined.

Don't worry about small lumps - but make sure there aren't any pockets of unmixed flour stuck at the bottom.

Put the batter in the fridge and leave it to rest for at least an hour - longer if possible. 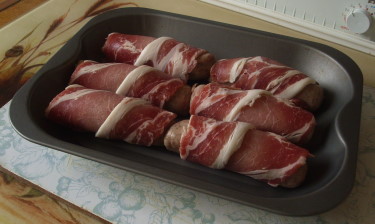 If you're going for the bacon option, wrap each of the sausages spirally with one rasher.

Arrange them in an ovenproof dish or tray and place in a preheated oven (180 C) for half an hour, or until they are done. 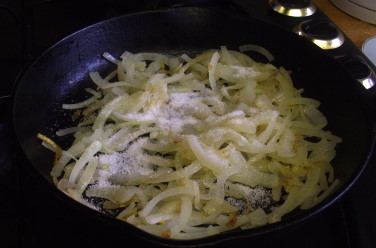 Start making the gravy - slice the onion into quarter rings and put in a pan to gently fry.

Keep an eye on the onions, stirring them once in a while.

When they just start to turn brown, add the sugar and stir it in to coat the onion pieces 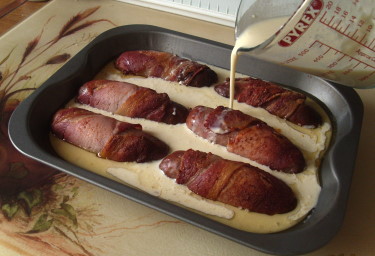 When the sausages are a few minutes short of being cooked, turn the oven up to 200 C and leave it at this temperature, ready for the batter.

When the sausages are done, working quickly (but with great care - there is very hot fat here), take the tray of sausages out of the oven

Add the batter (be careful - it may spit and sizzle). Return the dish to the oven as soon as possible (but again, without compromising on safety). 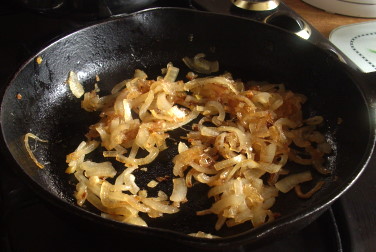 Cook them until they turn a deep brown tan colour. (they're still not finished in this image)

When the onions are fully browned, add some flour, stir it in and fry for a little while.

Add the stock and whisk with a fork to dissolve any lumps - turn up the heat and bring the gravy to a gentle simmer - it should thicken.

Season the gravy to taste. 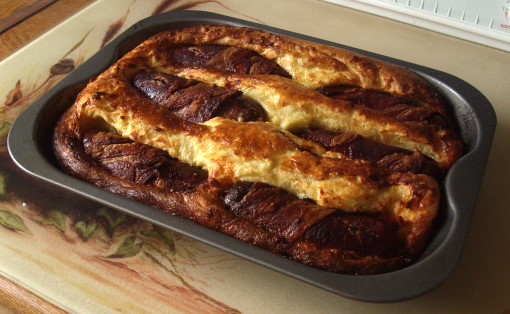 With a little luck, the gravy will just be ready at the same time as everything else. 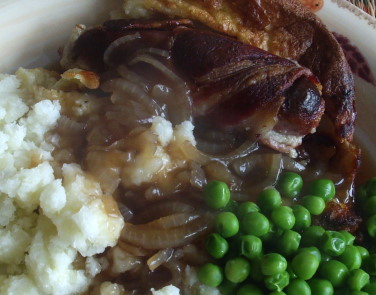 I like to serve toad in the hole with coarsely mashed potatoes and garden peas (I'll leave the timings of cooking these to your own ingenuity...)

(Apologies for this final photo - I was so keen to tuck in, I didn't think enough about getting a nice-looking presentation picture)

Adding the bacon is about as far from the norm as I dare take this recipe - it's such an ancient and hallowed thing - as well as being an example of the beauty of simplicity - I'd rather cherish it for what it is, than try to change it too much.

Toad in the hole is just one a handful of classic English/British dishes whose names have attained mythic status (even if the dishes themselves may not be known or understood).

Spotted Dick and Jam Roly Poly could be coming soon to these pages...