« Toad In The Hole - Gingerbread Empanadas »

I've cleared out a lot of the clutter that was preventing me from even taking down the boat from its hanging position, and more importantly, I've done some work to try to correct what I think is the major remaining flaw - directional stability.

It might just be down to lack of familiarity with handling, but I did find it just a little difficult to keep the boat tracking in a straight line - the reasons for this are, I think, twofold: 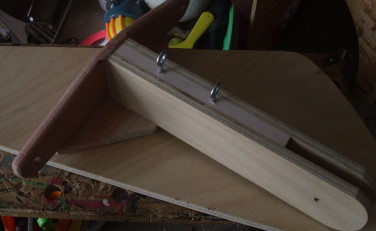 I'm going to add a long rudder - it will be a steering rudder, but I anticipate using it primarily in non-steering mode - that is, just to keep tracking straight

The rudder post is made from a sandwich of thick waterproof ply tongues, affixed to a reclaimed maple centre 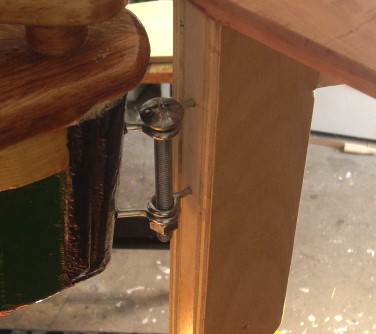 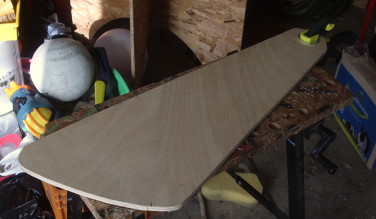 It swings freely through almost 180 degrees. Later on, I will add some elastic cords to keep it centred unless otherwise deflected.

It will be bolted in place between the two protruding tongues of the movable rudder post - swinging on a single bolt, the rudder will be able to flip up if it strikes an obstruction or when the boat is beached (as opposed to just breaking off otherwise)

Steering will be effected either by a pair of lines attached to the rudder horns, or by a rigid pole attached to one of them

If you'll pardon the pun, the addition of this rudder marks a turning point for the Snow Pea...

If it works, I will spend the winter equipping the boat with a small mast and sail (can't really do sailing without a rudder anyway) - as well as some sort of leeboard.

In the early summer of 2010, I'll transport everything to a suitable area of safe, calm inland water and see if I can teach myself to sail (I fancy I understand the basics, but recognise there's a difference between theory and practice)

If It Doesn't Work

If after the addition of a rudder, the Snow Pea is still too hard to handle, I will draw a line under it all - dispose of it and start again - building another, simpler boat from an established, stable design.

25th Sept 2009 - It's all done (pics to follow soon) everything is set for a test launch this weekend - I plan to be down at Botley Quay about 3pm on Saturday 26th to test out the new rudder modifications... 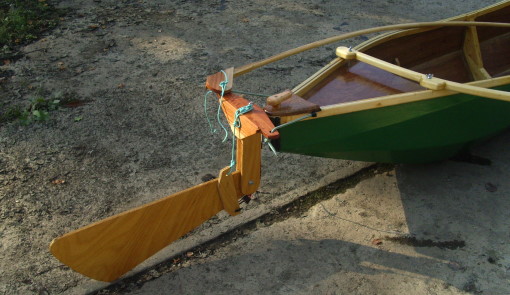 26th Sept 2009 - Here's a picture of the finished rudder assembly - in the end, we used it in this upper position all the time - it didn't need dropping any further and would only have snagged on weed or submerged branches

A long curved pole is attached to one of the rudder horns, curved (laminated from two pieces - the same as the outrigger pylon supports) - the curve allows the front seat passenger to steer - going around the person at the rear

Handling the boat on my own is now tricky, although I think this could be overcome by fixing the rudder control pole so I can lock it in any given position - I'd still be able to effect a turn by braking with the paddle

Well, there might be time for a proper trip down the river in the warm days of Autumn... we'll see...

In fact, I'm starting to like the idea of bolt-on accessories for the Snow Pea- I also have in mind (longer term) a pedal-power option - either driving a paddle wheel or a screw propeller. I will use chain drives or some other method to direct the rotary power up and over the gunwale, so that there is no need to perforate the hull

Thanks for a very interesting articleWhen I was young my Dad and I built a 15ft canoe and then added a sail to it with a dagger board on each side. To control the rudder we used ropes attached to the rudder and foot peddles which kept our hands free.