My page on making little decorative boxes out of recycled drink cans was enormously popular - but what else can we do using these techniques? - I've been experimenting with printing. 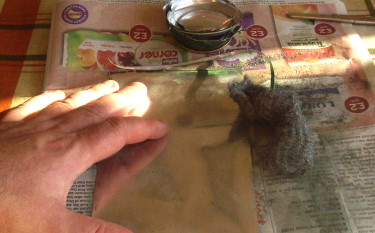 I prepared my can in much the same way as last time - carefully cutting around the ends with strong, sharp scissors, then cutting the resulting cylinder down one side and flattening it out.

As before, the edges of the thin metal are sharp and jagged - it's worth trimming them again once the metal is flattened out - they'll still be sharp, but this will remove the snaggy little spikes.

I used steel wire wool to remove the paint from the printed side of the metal - this isn't strictly necessary, but it does help to make your work visible as it develops. 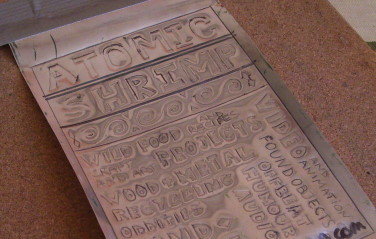 I taped the metal flat to a cork-backed placemat and traced out my design on it.

My plan was to try to create something that looked a bit like an old-fashioned handbill.

- Although I did rush it a bit, and it ended up looking a bit more casual and sloppy than I would have liked - no matter...

To emboss the metal, I used a strong ballpoint pen and the same triple-pass technique as I did for the metal box, and as shown in the diagram below:

If that doesn't make sense, perhaps this will help - here's a diagram of the same three stages - showing what it's trying to do, as if viewed from the edge of the metal:

Anyway, that's the process of making the printing plate - now, on with the printing - and here's where it all got a bit (too) experimental... 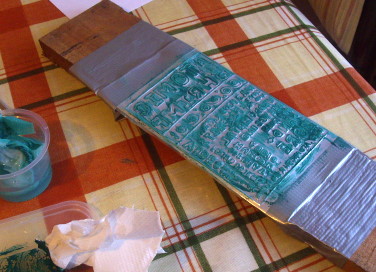 I taped the printing plate to a flat board.

Ideally, the next step would be to apply proper printing ink with something like a rubber roller or a firm chamois-covered sponge, but I had none of these supplies, so I just dabbed on some acrylic poster paint using a wad of kitchen paper. 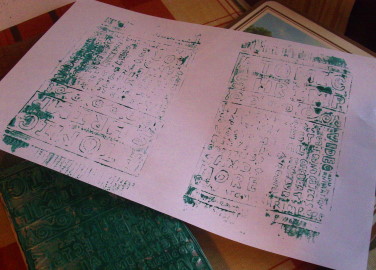 I placed a sheet of paper on the inked plate, covered it with a sheet of felt, then pressed it down with the cork-backed board.

Care must be taken here to prevent the paper from shifting until it is peeled off the plate.

The results were really not quite as good as I had hoped - let's take a closer look... 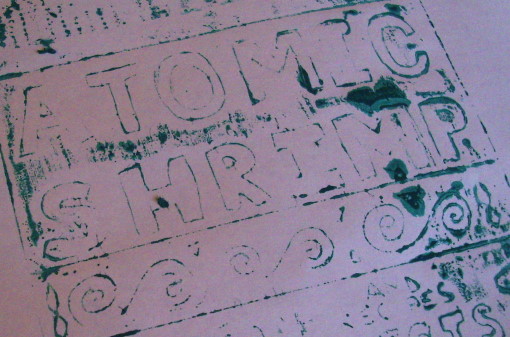 Despite an initially less-than-brilliant result, however, I still think this method has promise:

So I haven't completely written this idea off - maybe I'll do something similar in future when I can work out the kinks...