« Sock It To Me - Also Sock Zarathustra - Judas Ear Fungus » 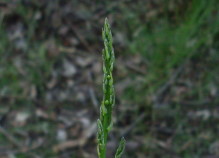 May/June 2010 - I picked some spears of wild asparagus from a salt marsh on the Hamble - after what turned out to be a very long wait.

What Is Wild Asparagus

Asparagus officinalis - This is in fact the true wild ancestor of modern cultivated asparagus.

It's a plant of salt marshes, estuary banks and low-lying fields and meadows near the sea - a typical Asparagus habitat might look like this: 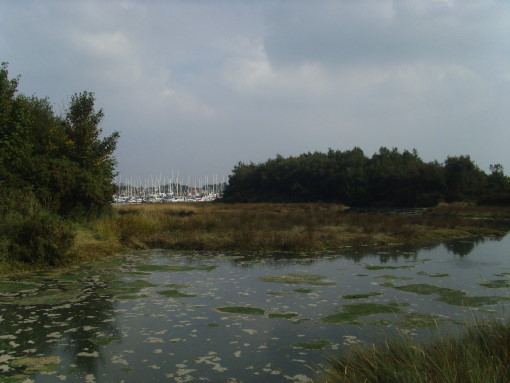 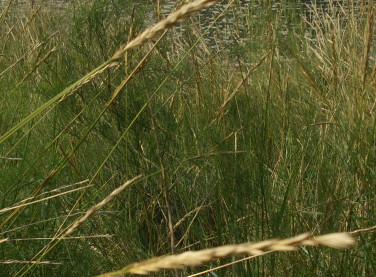 Finding Wild asparagus might take a bit of patience - because when it's at the immature spear stage, ready for picking, it's really not easy to see - particularly amongst tall grasses, reeds or other plants

The tall, feathery plant when mature, on the other hand, it quite easy to spot (once you know what you're looking for - can you spot it in this photo?), but is no good to eat. 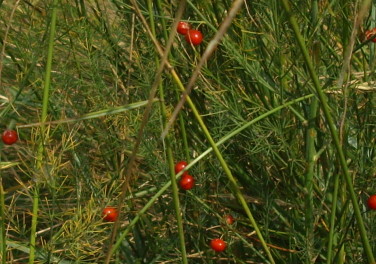 The mature female plants are often quite conspicuous as they may be found bearing bright red berries in late summer (September in this photo).

The berries are not edible, but I like to pick some and scatter them around to assist this plant in its reproductive efforts. 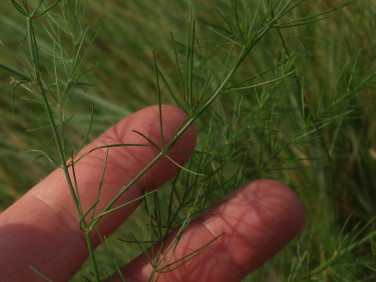 Here's a close-up of the plant - what you're looking for is something with tough, wiry olive-green stems, with side branches arranged in a sort of neat, open spiral, each branching out to feathery grasslike filaments.

So having found a good community of the adult plants, all you need do is carefully remember the location, then go back there six months later - starting in late April, returning every week or two until eventually, something starts to show.

At least, that's what I did - but even then, a sudden warm spell brought the young plants from non-existent to a point almost too far developed for picking. 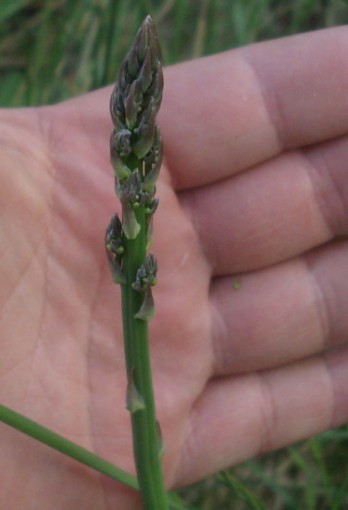 If you're lucky, you'll return to find some of these - fat (well, not fat by supermarket standards) shoots - very easily recognisable as asparagus.

Not all of them will look like that though - some might already be tall, feathery plants - others might have started to branch out, but still had tight terminal buds - the side shoots of the latter of these can still be picked - but they'll be quite slender and require almost no cooking. 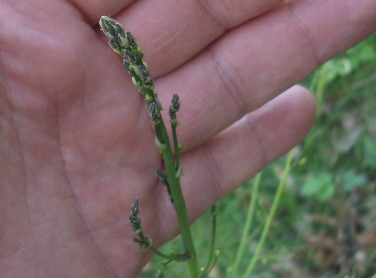 Here's an example of the more slender ones - these are still good to eat.

If you can, try not to harvest every single plant mercilessly.

Commercially-grown asparagus is fed and pampered so that it can recover from intensive picking, but in the wild, the plants have to fend for themselves and make do on a rather tighter energy budget. 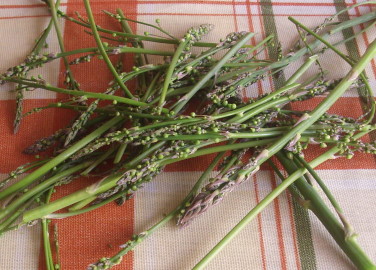 So here's my little haul of asparagus - barely more than a handful, but that's all I really wanted to take - I just want a taste, not a meal.

I washed the asparagus and dropped it into a shallow pan of boiling water - the thicker stalks first, then the thin ones a couple of minutes afterwards. A further two or three minutes of cooking and they were done - it really doesn't take any longer than this.

And the only way to do justice to this beautiful wild veg was to serve simply with a little bit of butter: 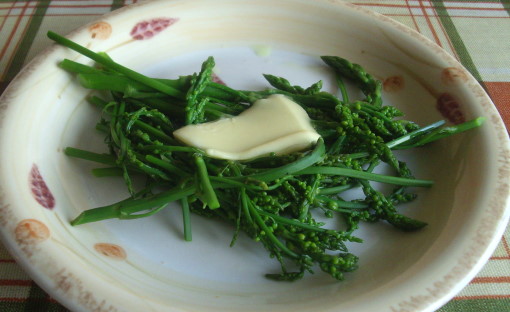 Better than the shops - for some reason, I expected wild asparagus to be bitter in comparison to shop-bought, but in fact, it's a great deal sweeter, and amazingly tender and delicate, despite a short cooking time.

Here are a few little detail pictures that might further assist in identifying this plant. 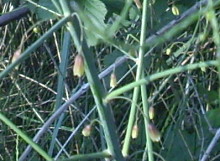 The berries (which are not edible) look like tiny tomatoes. Some plants may bear only one or two - others may be loaded to breaking point with them.

Similar to florist's 'asparagus fern' - which is another species of asparagus, the foliage manages to be simultaneously fluffy and diaphanous, yet dryish and wiry.

There are a few other seaside plants that you might initially mistake for asparagus foliage - notably fennel and chamomile, but both of those are considerably aromatic when crushed - asparagus isn't.