Up on St Catherine's Hill, Winchester, there are a great many Elder trees - including some quite old, decaying specimens - this is a great place to go looking for Judas Ear Fungus.

What Is Judas Ear Fungus? 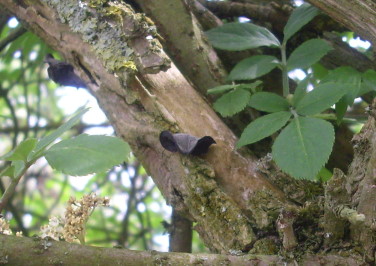 Auricularia auricula-judae. It's a rubbery, gelatinous purple-brown fungus that resembles a human ear in form and size.

It's found most commonly on dead or dying branches of Elder trees (Sambucus spp).

It can be found almost any time of year - either in active growth during wet spells in autumn, or in dried form - because in dry weather, it completely dessicates, shrinking into little crispy blue-black curls as seen here. 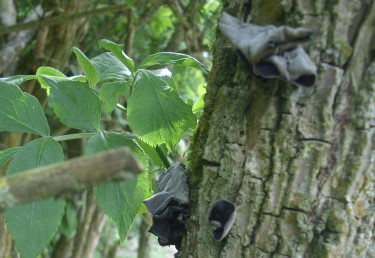 The good news is that it's perfectly usable when found all dried up like this - in fact, it's pretty convenient - because this is a mushroom that's useful for storage dried - and nature has done the hard work of preserving it.

The dried fungi just snap off easily by hand and can be dropped straight into a bag for storage - probably best to shake them first, in case there are any insects lurking inside the twists. 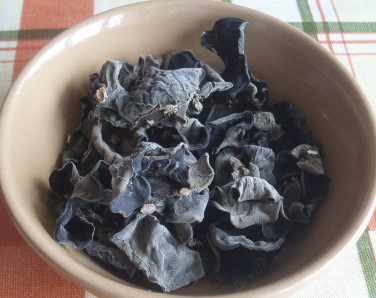 It didn't take me long to pick about a double handful of these dried mushrooms - I could have picked more, but we had gone to St Catherine's hill for a walk and I had fallen behind the rest of the group.

To use them, they first need to be rehydrated - this turned out to be a tremendously interesting process.

For a start, the dried mushrooms sink - I didn't expect that - but also, they soak up the water, visibly expanding and unfurling in just minutes - it's like watching those novelty paper flowers that open in a dish of water. 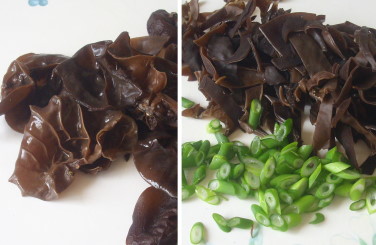 Once they're rehydrated, they've increased four or fivefold in size and they really do look like ears...

...Until they're sliced up (here with some sliced shallot leaves), then the look like rubber bands. 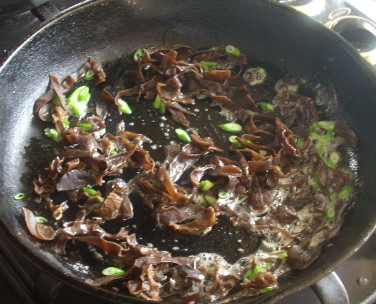 This is my first time tasting this fungus, so I wanted to cook them simply, so as not to lose them amongst lots of other ingredients and flavours.

So I sauteed them gently in a little butter, along with the shallot leaves - maybe for five minutes or so.

Then I finished them of with a splash of white wine and a few drops of soy sauce.

They don't seem to change much during cooking. 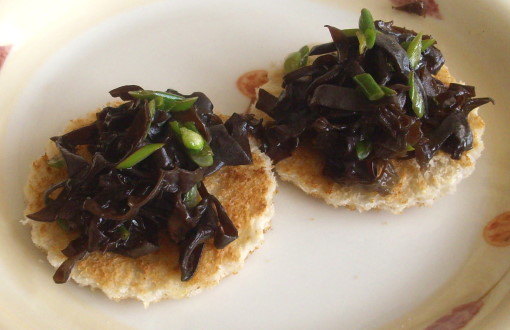 I served them on little circles of white toast.

They're mild and sweet-tasting - not really striking and they take on the flavour of the ingredients they're cooked with - this could be quite a useful characteristic - as they could be marinaded to rehydrate, rather than just being soaked in water.

The texture is quite strange and incredible, however - sort of softly rubbery, but with a crispy crunch. They'd be great in a stir-fry.

2012 was a year of almost relentless rain the south of the UK, where I live - and this seems to have very much favoured the growth of this fungus - I've returned to St Catherine's Hill on two occasions for bracing January walks and have been rewarded by bountiful finds of Judas Ears - and really nice specimens too. 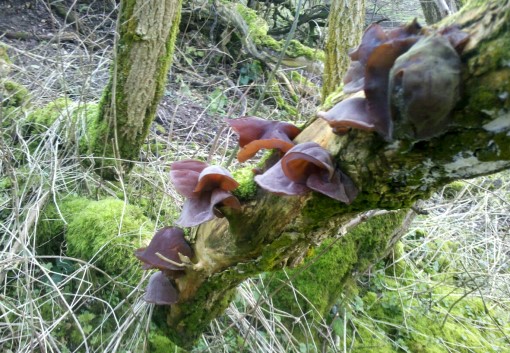 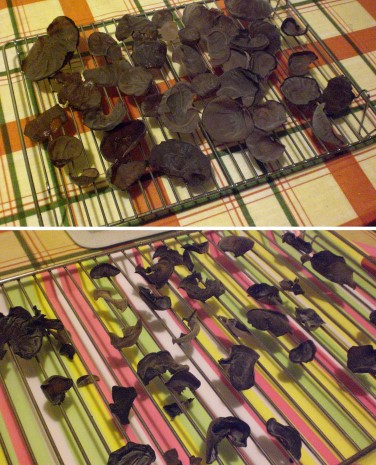 I think I might have implied above that drying this fungus is hard work - actually, it's really easy.

Just trim off any blemishes or bits of embedded dirt, bark and moss, rinse the mushrooms under cold running water, dab them dry with a clean cloth, then arrange them in a single layer on a wire rack.

After a couple of days in a well-ventilated place (out of direct sunlight), they darken and shrivel up to a surprisingly tiny fraction of their former size.

(The mushrooms you see in these two pictures are the same ones - about 400g of fresh fungus dried down to about 25g of little crispy, leathery shreds)

It's worth placing the wire rack on top of a tray, as the pieces will shrink so much, they can fall through the bars.

Once fully dried, the mushrooms can be packed in an airtight jar for storage - and can be rehydrated back to their original state at any time just by soaking in water for a few hours.

What Are They Really Called?

This fungus is also known as Jew's Ear, although that name seems to have fallen out of popularity - probably because even though it's only a corruption of Judas Ear, it sounds offensive or racist. The name 'Jelly Ear' seems to have become a popular and inoffensive common name now, although that does nothing to sanitise the Latin name.

The common name stems from the myth that the Elder was the tree from which Judas hanged himself - although it's not by any means the sole contender - other versions name other trees..

They are lovely stir fried with Japanese spices and made into nori roles. I have jars filled with them as they are also nice in soup (for the texture).