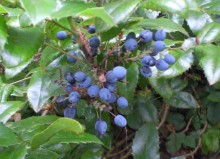 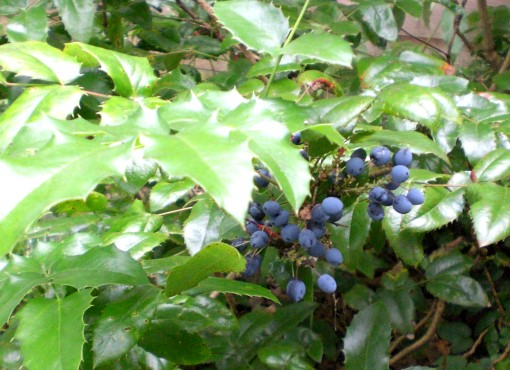 Mahonia aquifolium is the most well known species in this genus - it's a shrub with stiff, upright stems and glossy green leaves that superficially resemble holly.

It originates in the Americas, but is very widely planted here in the UK and may be found growing wild - I've seen great swathes of it in woodland near Thetford, Norfolk.

It has highly fragrant yellow flowers in winter and early spring, followed by purple berries which have a waxy bloom, making them appear vivid blue.

The plant (and the fruit) is also known by the common name Oregon Grape, although it is not related to grapes 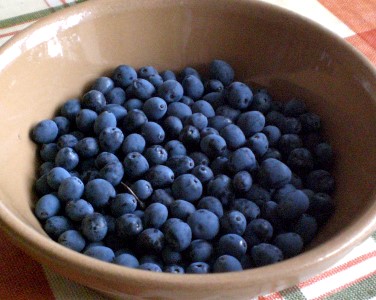 I picked a small bowl of the berries from the Mahonia in my own garden (so this is more urban foraging than proper wild food) - they look fantastic,.

Eaten raw, they are extremely tart - and not particularly fruity tasting - just sour, and they are very seedy.

I've tried making jelly from them in the past, but it didn't seem to matter how much sugar I added, the flavour was unbearably sour. What else can we try? 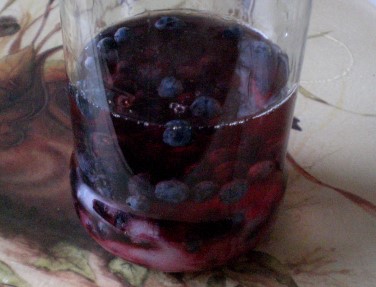 Well, maybe we can treat them like sloes - which are also extremely sour as a fresh fruit.

So, I pricked the berries (not individually, I just let loose on them with a fork while they were in the bowl), added approximately an equal volume of sugar to fruit and covered them with a generous splash of gin in a clean jar.

Almost immediately, the deep purple juice started to seep out and colour the liquor. 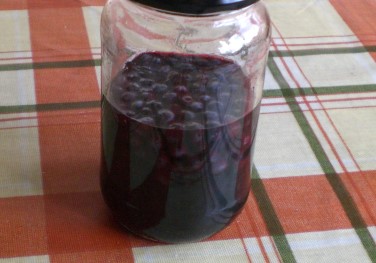 A few days later, all the sugar has dissolved and a lot of colour has come out into the gin.

It doesn't smell very promising - still not really all that aromatic - they smell like vegetables, not fruit, but we'll have to wait and see - I'll leave them steeping for a couple of months.

OK, here we are, six months later. It took a long time to get back to this, and I apologise to everyone who was left wondering. I dug the jar out of the back of the top shelf of my cupboard and opened it...

The liquor, which was blue-purple for a long time has now turned reddish-brown. The berries are almost white, having given up all their pigment to the gin.

Not initially promising. The first whiff of aroma that rose from the opened jar wasn't really very pleasant, in a weird sort of non-fruity vegetable way, however, this dispersed and didn't come back - maybe it's just where the jar has remained half full and closed for so long.

Actually, pretty good. Not really fruity at all, which seems odd for a luscious dark blue berry like this, but there's a pleasant astringent bitterness that balances the alcohol and the sweetness of the added sugar rather well. The flavour is complex, but slightly elusive, making you want to try another sip, just to pin it down.

This might be a nice drink to enjoy in small glasses as an appetiser before a meal. It's a curious drink, but not a bad one after all.