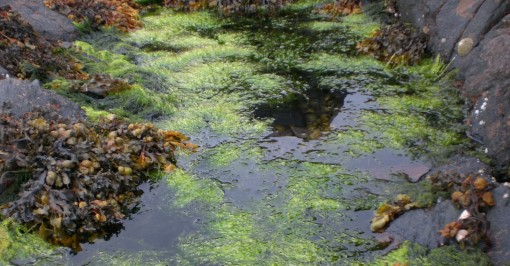 Enteromorpha intestinalis - Tufts of delicate soft green strands of seaweed, most often found floating on the surface of rock pools, particularly near sources of fresh water entering the sea and often toward the top of the tidal zone.

Both of the latin names refer to it being gut-like in appearance - presumably because the strands are blistered and twisted so that they somewhat resemble entrails. Personally, I think the connection is pretty tenuous. 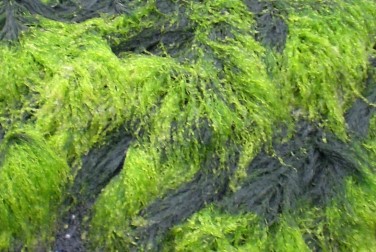 When stranded by receding water, the strands plaster themselves across the rocks in a thin, tangled layer, looking a bit like moss.

It's easier to gather the weed cleanly when it's floating in water however.

I gathered about half a pound of the weed and took it back to the cottage in a plastic bag. 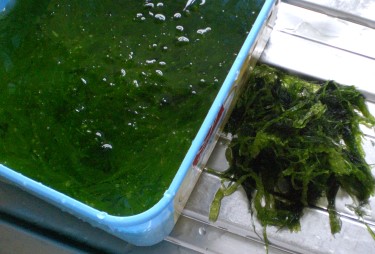 Back in the kitchen, I tore off most of the fibrous lower parts of the seaweed plants and put the fresher green strands in some clean fresh water to soak.

I swished the weed around in the water to loosen any grit or foreign bodies, then scooped it out and changed the water. 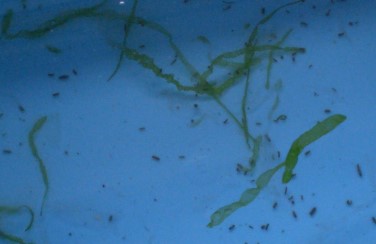 After five or more repeats of this process, I was still washing out a great many small shrimpy invertebrates into the clean water each time. It's highly unlikely that I removed them all, as I just stopped looking for them and went ahead cooking the weed.

I guess in a survival situation, it would be desirable to leave as many of these organisms in place as possible, as they probably have some traces of food and nutrient value. 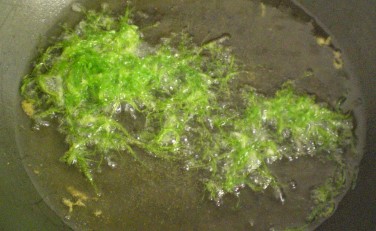 I heated some vegetable oil in a wok, then picked out the seaweed and squeezed it very tight in my hand to press out the water.

When the weed is dropped into the hot oil, it spits and sizzles vigorously for a second or two, then calms down, then stops sizzling altogether, meaning it's fully done.

The thin weed strands would burn easily, so I quickly scooped it out and drained it on a sheet of absorbent kitchen paper. 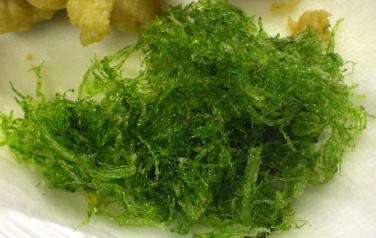 The seaweek cooks to a very delicate, crispy texture. The flavour is excellent - mild, but with a definite salty-sea tang.

This article is one of a series on wild foodstuffs foraged on holiday in the Wester Ross area of the Scottish Highlands in 2010 - click the Highland tag in the side column to see the others.