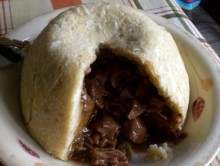 Here's another classic British dish - much misunderstood and often under-appreciated. But folks don't know what they're missing - it's steak and kidney pudding.

About Steak And Kidney Pudding

A number of misunderstandings and misconceptions surround this dish. Let's see if we can deal with a few.

Kidney is an organ meat - offal - and that fact alone is enough to put some people off. Not sure I can do anything to help there, except to insist that they're missing out on a treat.

I've heard some people rationalise their choice on the grounds 'I won't eat anything that's a filter', on the grounds that some offal such as kidney and liver might contain the animal's lifetime accumulation of nameless and scary toxins.

In fact, kidneys aren't filters (neither is liver). Generally speaking, they don't filter out and store anything. They extract, exchange and excrete things, but really, the same could be truthfully said of a lettuce leaf.

There's no particular reason why the kidneys or liver from a healthy domestic animal should be in any way more toxic than the rest of the beast.

It's true that when preparing the raw kidney, admittedly, it smells unpleasant in its own way, but so what? - it's hardly unique in this general regard. On cooking, everything changes anyway - new flavours and aromas arise, and in this dish, the kidney just makes for an incredibly intense and rich flavour. 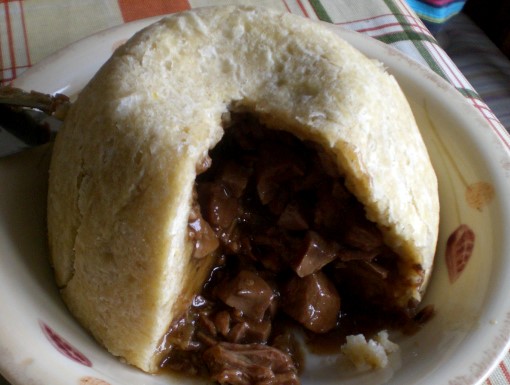 Why Is This A Pudding?

The term 'Pudding' in Britain may apply to any number of things and is certainly very much broader than a category of dessert. This is a kind of big, stuffed dumpling and it happens to be called Steak and Kidney Pudding - that's the way it has always been, and it's not about to change. 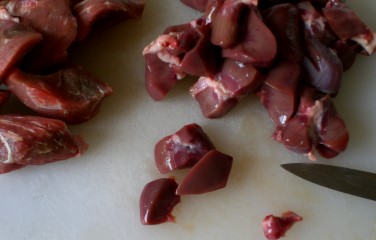 Slice the beef into small dice (about 1 cm cubes).

Prepare the kidney by slicing into small pieces, removing any gristly parts as you go.

At this stage, the kidney will probably smell fairly unpleasant (think: public urinal) - this is perfectly normal - don't be put off, because the next step is: 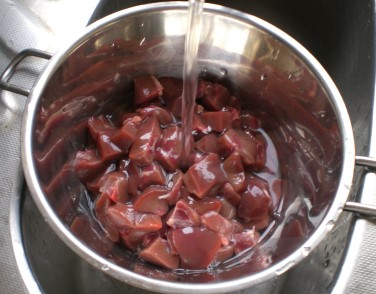 Rinse the diced kidney under the cold tap for a minute or so, in a colander.

This will remove some of the harsh odour. The colour will change from red-purple to deep pink.

The kidney might still seem a little unpleasant at the moment - trust me, it gets a lot better. 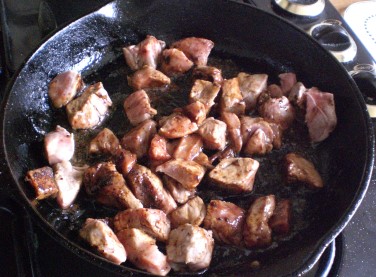 Fry the beef for a few minutes - crumble the stock cube over it to assist with the browning process.

Chop the onion finely, then add this, along with the kidney, to the pan. Fry for another few minutes, stirring occasionally.

Empty the pan into a heatproof dish that has a lid or cover. Add the flour to the pan and stir it around over the heat to mix with the juices and fats remaining from the frying.

Add the wine to the pan and stir it to dissolve all of the pan scrapings and flour - pour this on top of the casserole dish. Top up with water so that the meat is completely covered. Add about half a teaspoon of dried mixed herbs (sage, rosemary, thyme)

Place the dish in the oven at 150C (300F, Gas mark 2) for 2 hours - checking after an hour and topping up with additional water if it looks dry.

(I opted to cook mine in a small slow-cooker while I went out for the day - this works really well and ensures really tender meat for the filling). 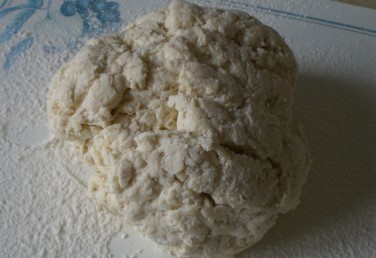 Make the crust by mixing the suet, flour and pinch of salt in a large mixing bowl - add just enough cole water to make a soft, but not sticky dough.

Divide the dough by cutting off about a quarter of it, then roll the larger piece out on a floured surface. Roll it until it's a circle about 30cm (12 inches) in diameter.

Spread butter all around the inside of a 15cm (6 inch) pudding basin, or other heatproof bowl. Drape the dough circle across the top, then carefully allow it to drop in and line the inside, pleating the dough as necessary to allow it to deform to the shape of the bowl.

Ensure that there is a little overhang of dough all the way around the rim. 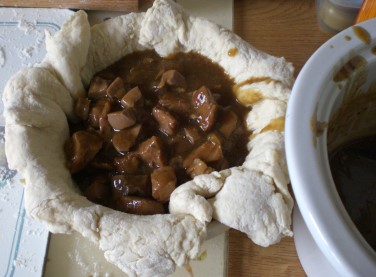 Using a slotted spoon, collect the meat out of the cassrole dish and put it inside the pudding case.

Top off with some of the gravy, leaving a little space at the top. Reserve any remaining gravy to serve with the finished dish.

Roll the other piece of dough into a circle just large enough to serve as a lid. 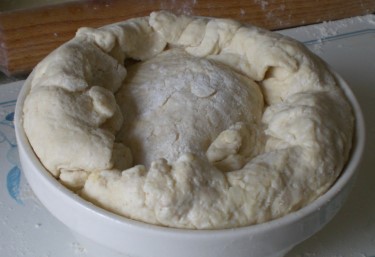 Place the lid on top and fold over the spare edges of dough to close it all up.

A little water on the mating edges of dough here will help to seal them up. Pinch the dough together to join it.

It doesn't need to be too neat and tidy, as long as there are no gaps. This will be the underside of the pudding. 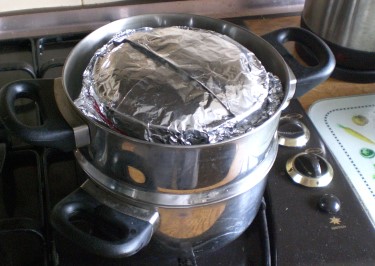 Cover the top with a circle of parchment or greaseproof paper, then a layer of foil with a pleat in it (to prevent it splitting when the pudding swells. Tie a piece of string tightly around the rim to secure the foil in place.

There are several possible approaches to cooking.

I steamed mine in the top of a double steamer for an hour (checking the water and topping up to prevent it drying out).

Alternatively, stand the bowl in some water in a metal dish and place in the oven for an hour at 150C

Or place the bowl direcltly into a pan of water (to a level about halfway up the bowl) and simmer for an hour. 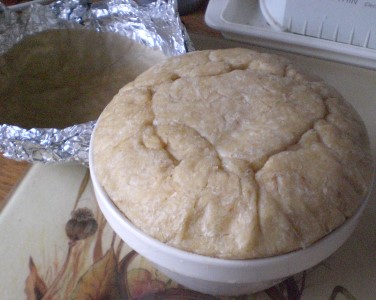 When it's done, the pudding will have swollen to a dome shape at the top of the bowl.

Carefully remove the foil lid and leave it open for a minute or two and let some of the excess steam escape - the crust will be too delicate to turn out straight away. 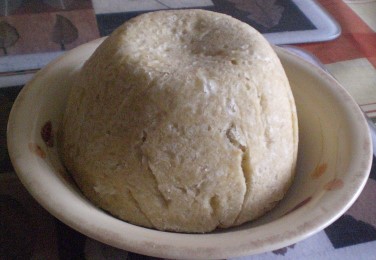 Place a bowl or plate over the top of the dish, then invert the two together.

Carefully lift away the bowl. If you buttered the inside the bowl completely, it should come away completely cleanly, leaving a perfectly-formed dome of soft, dumpling-like pudding.

The pudding case is delicate, but quite a good insulator, so the dish will stand for up to half an hour and still be warm enough to serve. 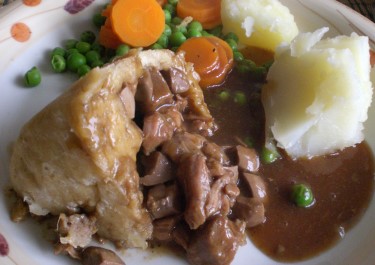 Serve with the gravy reserved earlier and any vegetables you like (except potatoes, which are compulsory when you have gravy this rich).