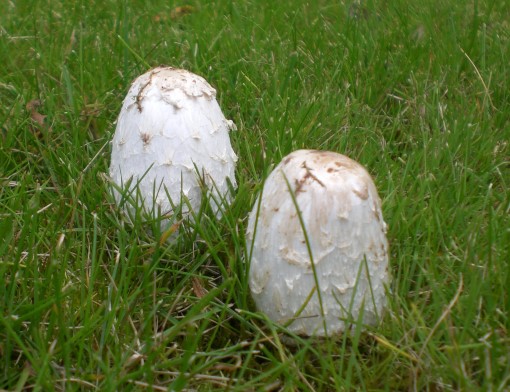 Coprinus comatus - also known as Lawyer's Wig or just Shaggy Caps, this mushroom is most commonly found in grass or pastures, especially where the soil has been disturbed or infilled previously. For this reason, they often appear on grass verges and lawns around new properties and developments.

They're exceptionally fast growing - pushing through the turf as little scaly buttons, they develop fast into tall, elongated-egg-shaped mushrooms and may grow as tall as 30cm in the space of a single day, with the scales turning more shaggy as the cap develops.

In the early stages, the flesh of the cap and gills is pure, slightly translucent white, with a pleasant earthy, mushroomy scent, but soon changes through pink and brown to black, whereupon the whole cap starts to decompose into a black liquid (hence the name inkcap).

Shaggy Inkcaps are only worth picking them if you find them in good, young condition where the flesh is still white, and when you have the opportunity to cook them within an hour of picking. They don't store or travel well at all.

Another species in this genus - the common inkcap, Coprinus atramentarius - mentioned here - is edible, but causes deeply unpleasant symptoms if consumed with alcohol (or within a short time before or afterwards).

Supposedly, this is not an attribute shared by Shaggy Inkcaps, however, I've always erred on the side of caution, because one of my wild food reference books does warn against it (perhaps erroneously). 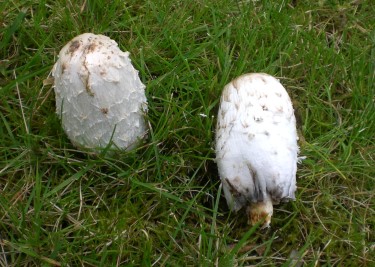 I only found a couple of fairly small specimens less than 10cm tall. They were quite difficult to pick, as the turf was very thick and dense, and the cap extends almost to the base of the stem.

These are probably at the limit of edibility - beginning to turn dark at the fringes of the cap already. 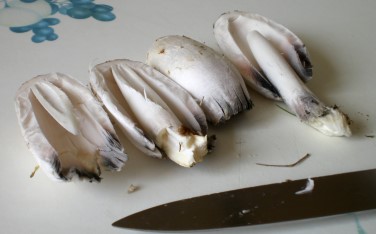 Even during the twenty minute journey home, the two mushrooms I found had lost some of their condition.

I trimmed a little of the dark portion off the bottom and cooked them anyway - I don't have a photo of this, because they cook incredibly fast and I didn't dare leave them unattended for a second.

Shaggy Inkcaps are very tasty - I've eaten them several times before and in my experience, they have a rich flavour that makes them taste like they've been cooked in butter even if they have only been lightly fried in a neutral tasting vegetable oil.

They are very soft and delicate and cook in a minute or less, so prepare everything else first and start the mushrooms at the last minute.

They sound very nice, took the children for a walk in Moors Valley country park yesterday, found lots of tasty looking mushrooms, but unfortunately I'm still a bit of a beginner when it comes to identification so left them in natures larder for someone