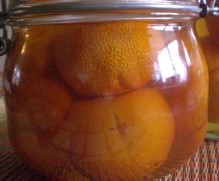 I originally intended to do this using kumquats, but I had trouble finding any in the shops, so I picked up this 600g bag of nice little clementines instead.

On reflection, kumqats would have been really expensive in any kind of quantity and anyway, clementines have lots of that really sweet tangerine aroma - so this is probably better all round. 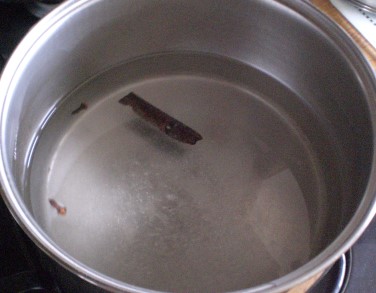 Put the Sugar, water and spices in the large pan and heat gently, stirring until all of the sugar is fully dissolved.

Turn off the heat and put the lid on the pan - it's important not to heat the syrup too much at this point, as sugar syrup can be heated hotter than boiling water, which may then cause the fruit to spit dangerously when added. 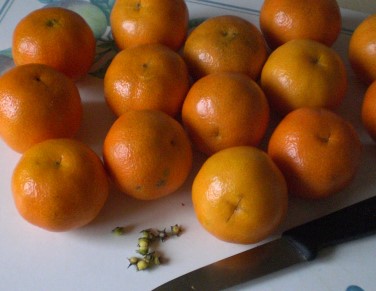 Prepare the clementines by washing them and picking off the little woody stalk remnants.

Stab the other end of each fruit (the blossom end) twice with a small knife, forming a cross-shaped hole and opening up the inside so the juice can get out and the syrup can get in. 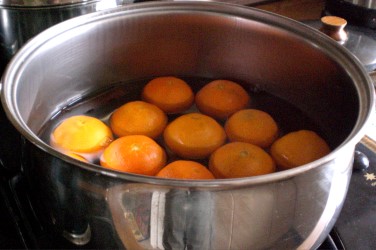 Place the fruits carefully in the syrup, then bring it to the boil.

Reduce the heat to a gentle simmer, then cover with the lid and cook for an hour.

During this cooking time, return to the pan every ten minutes or so and turn all the the fruits with a spoon, so that they cook evenly in the syrup. 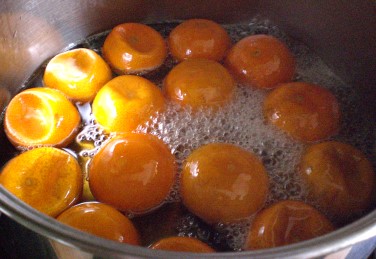 At the end of the hour's simmering, the skins of the clementines should be starting to look a little translucent and the fruit should be fairly soft (don't touch with your fingers though - that syrup is really hot).

Press each fruit against the bottom of the pan with a spoon - this will squeeze some of the juice out, and allow some of the hot syrup to enter - repeat this a couple of times, then turn off the heat.

Lift the clementines out of the pan with a slotted spoon and pack them into sterilised jars.

If you're intending to make the alcoholic version of this recipe, add the spirit to the syrup now, stir it in well, then pour immediately over the fruit in the jars.

If there isn't enough syrup to cover the fruit, make up a little more using the ratio of 100ml of water to 150g of sugar - this is a stronger syrup than this recipe started with, but all that simmering will have reduced the cooking syrup considerably. 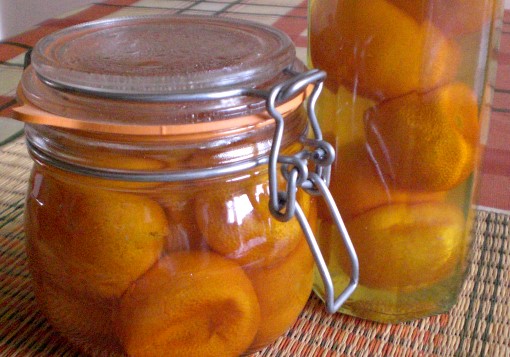 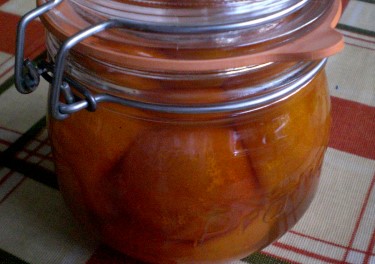 Leave for at least 24 hours before using the preserve - the fruit will have darkened and become more translucent as the syrup works on the skins and pulp.

As long as the fruit is immersed in syrup, it will keep like this pretty much indefinitely. Over time, it will change slowly and become more candied in consistency. 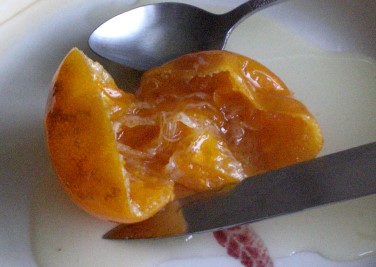 So here's one of the preserved clementines as at 24 hours after packing in the jar. It's quite a lot like a strong orange marmalade, except that the fruit is whole, and has an alcoholic kick.

It can be sliced or shredded and used as a dessert topping, or chopped and used as an ingredient in fruit cakes, buns and other recipes. clementines10.jpg

I embedded four of them whole in my Christmas plum pudding on Stir-Up Sunday (Nov 21st, 2010). I'll update this page after we eat the pudding on Christmas Day...

These preserved whole clementines make great gifts for foodie friends - they look really pretty in the jar and have a dozen uses - for example a few shreds of the fruit and a drizzle of the syrup over ordinary ice cream transforms it into a really special dessert, or they can be added to the top of cupcakes and covered with melted chocolate.

An orange-flavoured liqueur - such as Cointreau - can be used in the alcoholic version of the syrup, however this isn't really necessary, as the fruit has plenty of flavour and aroma all of its own. 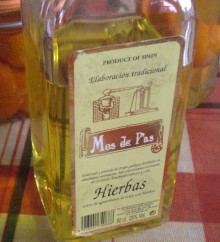 I used a Spanish herb-infused liqueur for mine - which added a subtle extra dimension to the complexity of flavour.