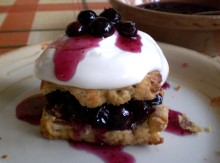 These moist and crumbly apple scones are delicious just split and buttered, or spread with jam.

Even better, this recipe also includes a quick, simple blueberry compote that complements them very nicely.

Fresh fruit is an unusual addition to scones - usually, it's raisins or sultanas, but finely-diced apple makes them really tasty and moist, but without losing the crumbly delicate texture that makes scones so delightful. 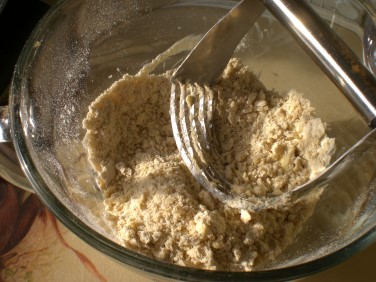 Put the flour, spices and baking powder in a large mixing bowl. Add the fat, cut into small chunks.

Rub the fat into the flour, either with fingertips, or a specialised rubbing in tool as shown here. This can also be done in a food processor, using the pulse mode.

Rub the ingredients together until the mixture resembles coarse crumbs. 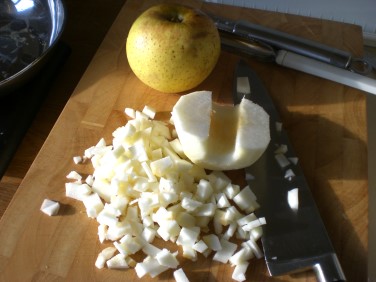 I'm not sure what variety of apple I was using here - they came from a tree labelled as a crab apple, and they don't seem like ordinary dessert apples - as they're quite crisp and almost grainy in texture - not unlike an Asian Pear (although they definitiely are apples). 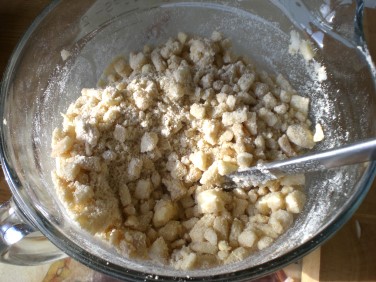 Add the apple pieces and sugar and stir them in thoroughly using a fork.

It may seem like there's a high proportion of apple in the mix at this point, but don't worry. 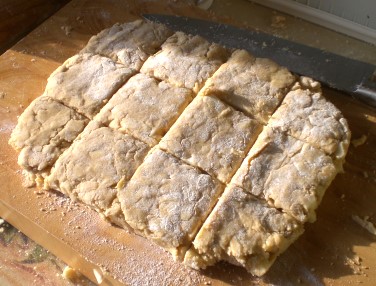 Turn the mixture out onto a floured board and use your fingers to bring it together into a single lump of dough, but don't knead it too much.

Minimal working of the mixture at this stage pays off later - the scones will stay crumbly and light,

Shape it roughly into a rectangle, roll to an even thickness equivalent to the width of your thumb. Cut into squares - 12 if you want fairly standard sized scones, or fewer if you like them extra large. 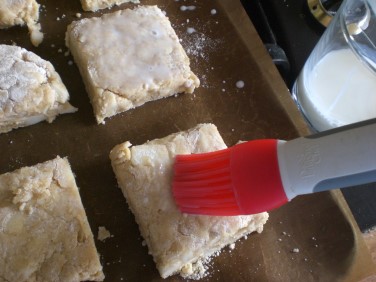 Arrange them on a greased baking sheet and brush the tops with milk.

Place in the oven and set a timer for 15 minutes. 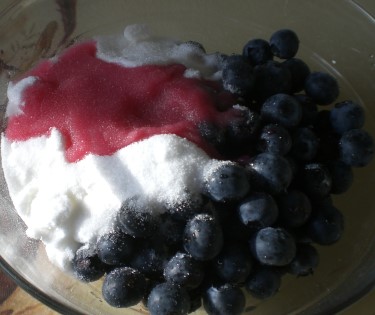 Meanwhile, put the blueberries and sugar in a bowl and add a dash of spirit or liqueur (I used sloe gin).

Stir together, then put the bowl in a microwave oven for 2 minutes, remove, stir and microwave again for a further minute. 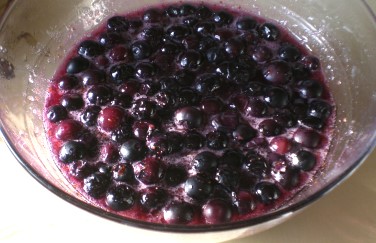 The blueberries will stay mostly intact, but some of their juice will come out and dissolve the sugar into a thick fruity syrup.

Cover and leave to cool - the syrup will thicken further. 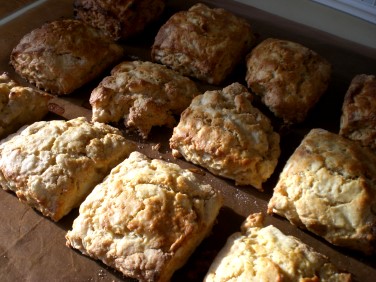 Remove the scones from the oven and leave them to cool for a couple of minutes on the tray, then transfer to a wire rack and leave until completely cold.

Serve split with butter and jam, or with a generous dollop of cream or Greek yoghurt, and a spoonful of the syrupy blueberry compote. 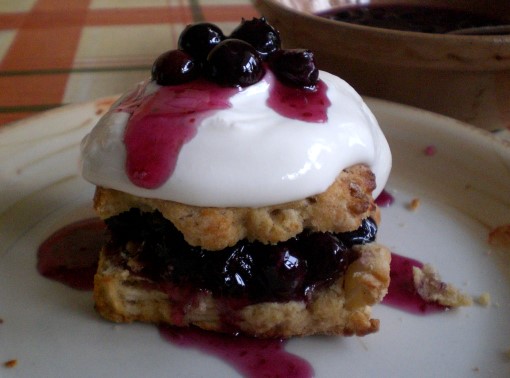